Dr. Hansen He discusses his research into the regulatory role of noncoding genes in prostate cancer development 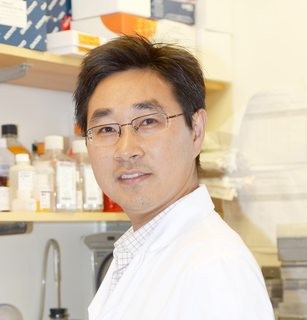 Principal investigator Hansen He says the findings published online today in Nature Genetics show how these genes – known as “noncoding RNA” – function in activating the disease process. Dr. He, an epigeneticist, is a Scientist at the Princess Margaret Cancer Centre, University Health Network. He is also Assistant Professor in the Department of Medical Biophysics, University of Toronto, and talks about his research at (https://youtu.be/SySA8jCBLIM).

Dr. He says: “In prostate cancer there are more than 100 known risk regions associated with the development and progression of the disease but for most of them we don’t know how. In our work, we found that half those risk regions may function through noncoding genes.” Dr. He says that integrating this new knowledge about genetic variations and the function of noncoding RNA moves the science closer to developing a clinical biomarker to advance personalized cancer medicine for patients by being able to predict who will develop prostate cancer and whether or not it will be aggressive.

The research team collaborated with the Princess Margaret Genome Centre and delved further into the genetic variations associated with noncoding RNA PCAT1, which is already known to be highly expressed in prostate cancer patients, to zero in on how the noncoding genes function.

“Noncoding RNA has many functions and in this study we found that PCAT1 functions as a kind of glue to attract different protein complexes together and guide them to specific genomic location to activate their target gene expression that starts the disease process.

“We are going to expand this knowledge as we research the other 44 genes associated with genetic variations,” says Dr. He.

“Cancer is very smart to take every possible way to survive and use every piece of our genome. If research only focuses on the two percent of the genome that is the protein- coding genes, we will have limited understanding of how the cancer can survive. We cannot achieve personalized cancer medicine without understanding the other 98 percent of our genome.”

The other 98 percent – what used to be called ‘junk DNA’ because it was outside the protein-coding genes with no known function – is now providing a treasure trove to epigeneticists such as Dr. He.

“The major contribution of our work is to the link genetic variations outside of the gene to noncoding genes rather than protein-coding genes, which have been the traditional research focus.”

The research was funded by The Princess Margaret Cancer Foundation, Prostate Cancer Canada, the Canadian Institutes of Health Research, the Natural Sciences and Engineering Research Council of Canada, the Canada Foundation for Innovation, the Ontario Research Fund, the Ontario Institute for Cancer Research, the Women in Insurance Cancer Crusade and the Canadian Cancer Society.

About Princess Margaret Cancer Centre, University Health Network The Princess Margaret Cancer Centre has achieved an international reputation as a global leader in the fight against cancer and delivering personalized cancer medicine. The Princess Margaret, one of the top five international cancer research centres, is a member of the University Health Network, which also includes Toronto General Hospital, Toronto Western Hospital, Toronto Rehabilitation Institute and the Michener Institute for Education; all affiliated with the University of Toronto. For more information, go to www.theprincessmargaret.ca or www.uhn.ca .