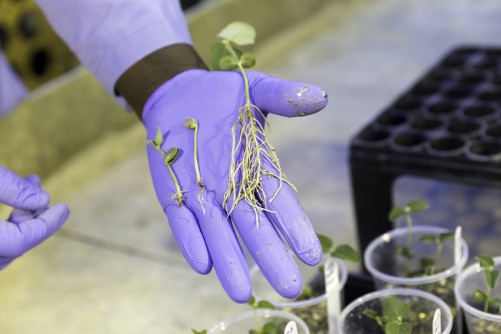 Soybeans in the second vegetative stage infected with the pathogen Fusarium proliferatum have underdeveloped root structures in comparison to healthy soybean seedlings. 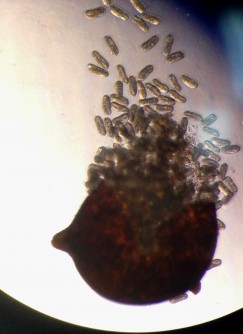 A soybean cyst is the size of the period at the end of this sentence and can contain up to 300 nematode eggs.

Soybean roots are under attack.

Newswise — The soybean’s No. 1 enemy, a parasitic round worm called the soybean cyst nematode, feeds on the roots. In addition, sudden death syndrome, a fungal disease which inhibits root growth, has begun to impact soybeans in South Dakota.

Though soybean producers from neighboring states like Iowa have experienced yield losses due to sudden death syndrome for nearly a decade, the disease did not impact South Dakota producers until 2013, according to South Dakota State University field crops pathologist Febina Mathew. Moist soil and cool weather during planting followed by rainy weather during flowering have contributed to an increase in sudden death syndrome in the state.

In addition, sudden death syndrome tends to be worse in fields that have high levels of soybean cyst nematode, according to Mathew and SDSU Extension plant pathologist Emmanuel Byamukama. This increases the importance of testing soils for soybean cyst nematodes this spring. These tests are free for all South Dakota producers, thanks to support from the South Dakota Soybean Promotion and Research Council.

“This association between the worm and the fungus can be affected by abiotic and biotic factors in the field,” Mathew pointed out. Consequently, they are also evaluating whether soil factors, such as potassium, increase the susceptibility of soybean plants to sudden death syndrome, particularly in relationship to the soybean cyst nematode.

To do this, Mathew and Byamukama are working with SDSU Extension entomologist Adam Varenhorst and crop production specialist Jonathan Kleinjan, as well as U. S. Department of Agriculture research agronomist Shannon Osborne. The research is supported by the South Dakota Soybean Promotion and Research Council.

A 2014 survey of 200 fields in 22 South Dakota counties showed that approximately 30 fields in 18 counties had signs of sudden death syndrome, according to Mathew. However, only a few of the more infected fields had low to moderate yield losses. “The pathogen infects plants through the roots, slowly releasing its toxin over time,” Mathew explained. It affects the roots and eventually causes yellowing and then browning of the leaves; however, these symptoms are not apparent until the soybean plants begin to flower. Facts about nematodesWhen it comes to the soybean cyst nematode, Byamukama said, “It’s purely a management issue because we cannot eradicate it.” The nematode can survive in soil for 10 years without any host.

“It’s highly prolific. One cyst can have 300 eggs within it, and those 300 eggs can reproduce up to three times in a season,” he said, noting, not all of the eggs hatch at once. That makes management difficult.

There are no obvious plant symptoms even when yield losses are already occurring, Byamukama explained. That underscores the importance of periodically testing soil for the cysts.

Yearly testing at the Southeast Research Center near Beresford, South Dakota, has not yet identified any nematicide seed treatments that have increased soybean yields, according to Byamukama. Consequently, resistance has been the most effective way to manage these pests.

However, “90 percent of resistance in commercial soybean cultivars comes from one source, Plant Introduction line 88788,” he cautioned, “so it may not last for long.”

In the last three years, Byamukama and graduate student Krishna Acharya have collected soil samples from 28 East River counties to determine which resistance gene sources are still effective against the predominant races of Heterodera glycine, or soybean cyst nematode, in South Dakota.

Greenhouse testing has shown 10 to 30 percent reproduction rates on varieties with resistant genes from PI 88788. “Already, we are seeing some pressure,” Byamukama said. He counsels producers to rotate crops and vary the resistant soybean cultivars they plant. 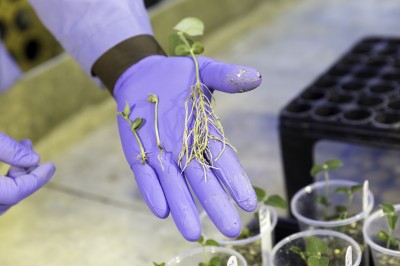 Caption: Soybeans in the second vegetative stage infected with the pathogen Fusarium proliferatum have underdeveloped root structures in comparison to healthy soybean seedlings. 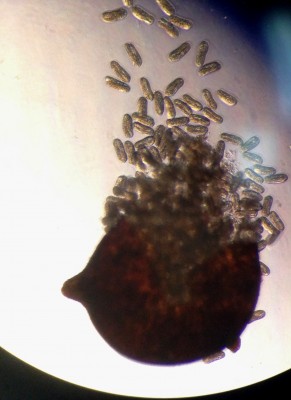 Caption: A soybean cyst is the size of the period at the end of this sentence and can contain up to 300 nematode eggs.