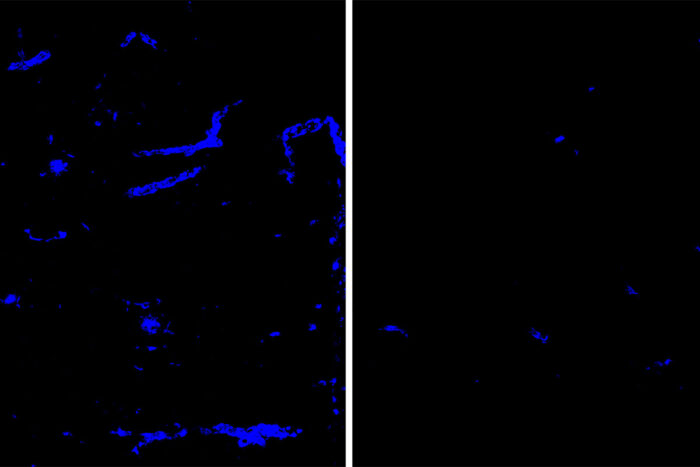 Newswise — As people age, a normal brain protein known as amyloid beta often starts to collect into harmful amyloid plaques in the brain. Such plaques can be the first step on the path to Alzheimer’s dementia. When they form around blood vessels in the brain, a condition known as cerebral amyloid angiopathy, the plaques also raise the risk of strokes.

Several antibodies that target amyloid plaques have been studied as experimental treatments for Alzheimer’s disease. Such antibodies also may have the potential to treat cerebral amyloid angiopathy, although they haven’t yet been evaluated in clinical trials. But all of the anti-amyloid antibodies that have successfully reduced amyloid plaques in Alzheimer’s clinical trials also can cause a worrisome side effect: an increased risk of brain swelling and bleeds.

Now, researchers at Washington University School of Medicine in St. Louis have identified an antibody that, in mice, removes amyloid plaques from brain tissue and blood vessels without increasing risk of brain bleeds. The antibody targets a minor component of amyloid plaques known as apolipoprotein E (APOE).

“Alzheimer’s researchers have been searching for decades for therapies that reduce amyloid in the brain, and now that we have some promising candidates, we find that there’s this complication,” said senior author David Holtzman, MD, the Andrew B. and Gretchen P. Jones Professor and head of the Department of Neurology. “Each of the antibodies that removes amyloid plaques in clinical trials is a little different, but they all have this problem, to a greater or lesser degree. We’ve taken a different approach by targeting APOE, and it seems to be effective at removing amyloid from both the brain tissue and the blood vessels, while avoiding this potentially dangerous side effect.”

The side effect, called ARIA, for amyloid-related imaging abnormalities, is visible on brain scans. Such abnormalities indicate swelling or bleeding in the brain caused by inflammation, and can lead to headaches, confusion and even seizures. In clinical trials for anti-amyloid antibodies, roughly 20% of participants develop ARIA, although not all have symptoms.

Anti-amyloid antibodies work by alerting the immune system to the presence of unwanted material — amyloid plaques — and directing the cleanup crew — inflammatory cells known as microglia — to clear out such debris. ARIA seems to be the result of an overenthusiastic inflammatory response. Holtzman and first author Monica Xiong, a graduate student, suspected that an antibody that targets only a minor part of the amyloid plaque might elicit a more restrained response that clears the plaques from both brain tissue and blood vessels without causing ARIA.

Fortunately, they had one such antibody on hand: an antibody called HAE-4 that targets a specific form of human APOE that is found sparsely in amyloid plaques and triggers the removal of plaques from brain tissue. To determine whether HAE-4 also removes amyloid from brain blood vessels, the researchers used mice genetically modified with human genes for amyloid and APOE4, a form of APOE associated with a high risk of developing Alzheimer’s and cerebral amyloid angiopathy. Such mice develop abundant amyloid plaques in brain tissue and brain blood vessels by the time they are about six months old. Along with Holtzman and Xiong, the research team included co-authors Hong Jiang, PhD, a senior scientist in Holtzman’s lab, and Gregory J. Zipfel, MD, the Ralph G. Dacey Distinguished Professor of Neurological Surgery and head of the Department of Neurosurgery, among others.

Amyloid plaques in brain blood vessels are dangerous because they can lead to blockages or ruptures that cause strokes. The researchers compared the number of brain bleeds in mice treated for eight weeks with either HAE-4 or aducanumab, an anti-amyloid antibody that is in phase 3 clinical trials for Alzheimer’s. The mice had a baseline level of tiny brain bleeds because of their genetic predisposition for amyloid buildup in blood vessels. But aducanumab significantly increased the number of bleeds while HAE-4 did not.

“Some people get cerebral amyloid angiopathy and never get Alzheimer’s dementia, but they may have strokes instead,” Holtzman said. “A buildup of amyloid in brain blood vessels can be managed by controlling blood pressure and other things, but there isn’t a specific treatment for it. This study is exciting because it not only shows that we can treat the condition in an animal model, but we may be able to do it without the side effects that undermine the effectiveness of other anti-amyloid therapeutics.”