Protons Get Zippier in Neutron-Rich Nuclei

Protons appear to get extra pep in their step when they’re outnumbered by neutrons in the atom’s nucleus. 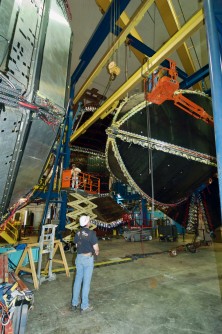 The data for this result came from an experiment conducted with the Continuous Electron Beam Accelerator Facility at Jefferson Lab in Newport News, Va. This photo shows the CEBAF Large Acceptance Spectrometer in Jefferson Lab's Hall B, which was used to detect the particles.

Newswise — A new study carried out at the Department of Energy's Thomas Jefferson National Accelerator Facility has confirmed that increasing the number of neutrons as compared to protons in the atom’s nucleus also increases the average momentum of its protons. The nuclear physics result, which has implications for the dynamics of neutron stars, has been published in the journal Nature.

The study involves short-range correlations, a phenomenon in which protons and neutrons, or nucleons, may pair up briefly inside the nucleus. This brief pairing imparts the two partners with high momentum.

Earlier research found that nucleons prefer to pair up with nucleons of a different type (for instance, protons prefer neutrons and vice-versa). The research, which only measured protons, had also hinted that a greater fraction of protons than neutrons may pair up in neutron-rich nuclei, thus giving the protons a higher-average momentum than neutrons.

“What differentiates this study from earlier ones is that this is the first time we detect the neutron,” says Meytal Duer, a graduate student at Tel Aviv University in Israel who is the lead author on the paper and who led the analysis effort. Including the neutron in the study, she says, also allowed the nuclear physics researchers to quantify the short-range correlations effect.

Duer and her colleagues re-analyzed data from an experiment conducted in 2004. In the experiment, the Jefferson Lab Continuous Electron Beam Accelerator Facility produced a 5.01 GeV beam of electrons to probe nuclei of carbon, aluminum, iron and lead.

“When the electron comes in and hits the nucleus, we have struck a proton or a neutron. We detected the scattered electron and the scattered proton or neutron,” Duer explains. “This is the first study to measure both protons and neutrons in short-range correlations and compare the high-momentum fraction carried by each.”

The researchers found that when they compared the lightest nucleus, carbon, to the progressively heavier and neutron-rich nuclei of aluminum, iron and lead, the fraction of high-momentum protons went up.

Hen explains that this may be a consequence of the pair preference phenomenon exhibited by short-range correlations. That is, protons and neutrons both prefer to pair with particles different from themselves by 20 to 1. In neutron-rich nuclei, the few protons will have more pairing opportunities than the plentiful neutrons.

Lawrence Weinstein, a lead coauthor and Professor & Eminent Scholar at Old Dominion University, says the result of that pairing preference has now been confirmed and quantified for the first time by this new finding.

The result also has implications for the dynamics of neutron stars, which are made up of about five percent protons. Due to their high average momentum as compared to neutrons, the protons may have an out-sized effect on neutron star structure.

The researchers say the next step is to move forward with new experiments that may be able to get at least ten times as much data on a wider range of nuclei, as well as continuing their efforts to scrutinize the data that’s already been collected for more insights into these mysterious nucleon pairings and how they influence nuclear structure.

The analysis was carried out as part of the Jefferson Lab Hall B Data-Mining project, which is supported by DOE’s Office of Science. The research was also supported by the National Science Foundation, the Israel Science Foundation, the Chilean Comisión Nacional de Investigación Científica y Tecnológica, the French Centre National de la   Recherche Scientifique and Commissariat a l’Energie Atomique the French-American Cultural Exchange, the Italian Istituto Nazionale di Fisica Nucleare, the National Research Foundation of Korea, and the UK’s Science and Technology Facilities Council.