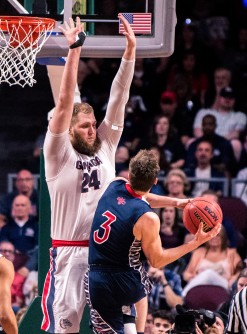 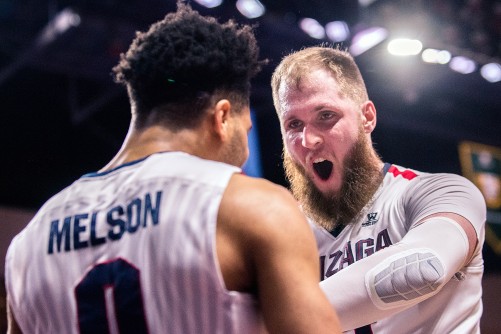 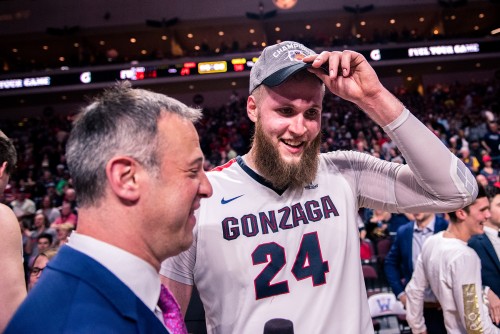 Newswise — SPOKANE, Wash. – The anxieties Przemek Karnowski was feeling five years ago when he arrived in the United States to begin his college career at Gonzaga University had nothing to do with basketball.

It was everything else – being half a world away from his family and friends, the strange culture, the challenging language, the unfamiliar food, the worries about academics.

Fast forward to March of 2017. Karnowski still misses his family back in Torun, Poland, but he’s made plenty of new friends in Spokane, he’s embraced American culture, he’s fluent in English and he’s already earned a bachelor’s degree in sports management and is nearly halfway to a master’s degree in business administration. If only he could get used to American food.

“I don’t like French fries and burgers,” he said. “I miss my mother’s food. I love her soups.”

Notwithstanding the lack of mom’s home cooking, Karnowski has managed to keep a solid 300 pounds on his 7-foot-1-inch frame while at Gonzaga. And he’s used that size and strength – along with agile footwork, slick passing and a smooth shooting touch – to cast an immense shadow across the interior paint of every basketball arena in which he’s played.

A three-time all-West Coast Conference choice, Karnowski is a finalist this season for both the Kareem Abdul Jabbar Award, presented by the Naismith Memorial Hall of Fame to the top center in college basketball, and the Senior CLASS award (the acronym stands for “celebrating loyalty and achievement for staying in school”), which goes to an NCAA senior with notable accomplishments in community, classroom, character and competition.

“Przemek has to be on the Mount Rushmore of Gonzaga basketball,” said Tommy Lloyd, head assistant to GU men’s basketball Coach Mark Few and the program’s chief foreign recruiter. “He’s a high IQ player with a great skill set and a strong work ethic. When you put his size on top of all that, you have a pretty impressive package. The kid is a winner.”

All-Time Wins LeaderA huge favorite of Zags fans, Karnowski has been part of more victories during his career than any player in NCAA Division I history. He became the NCAA all-time wins leader with 132 victories when GU beat Saint Mary’s in the WCC tournament title game. With the Zags’ first-round NCAA Tournament victory Thursday over No. 16-seed South Dakota State, his wins totaled 133.

This marks the 19th consecutive trip to the NCAA Tournament for Gonzaga, 33-1, and ranked No. 2 in both major U.S. college basketball polls. Only three schools have longer active NCAA Tournament streaks than GU. Along the way, Gonzaga has never won fewer than 20 games in a season and has made it to the tournament’s Sweet Sixteen seven times and the Elite Eight twice.

“International players have been a huge part of the growth of Gonzaga basketball,” Lloyd said. “International recruiting is an area in which we have been able to distinguish ourselves over the years. Spokane is a great place, but it’s not a hotbed of basketball talent. We have to look outside the area – including outside the U.S. But that has paid off for us.”

The last time Gonzaga reached the Elite Eight, in 2015, the Zags’ lineup included Karnowski as well as point guard Kevin Pangos out of Canada and forward Domantas Sabonis from Lithuania.

“Internationally, we can recruit at a level and bring in players that schools our size just don’t get,” Lloyd said. “Guys like Pangos and Karnowski come here and they’re McDonald’s All-American talents – it’s just that they’re not Americans.”

McDonald’s each year selects the top 24 U.S. high school basketball players for All-American honors and showcases them in a nationally televised all-star game.

A Global GonzagaAt Gonzaga, globalism can be found in the very roots of the university. Gonzaga was founded in 1887 by Jesuit priests who came from Italy, Ireland, France, Germany, Switzerland and Canada as well as the U.S. to build a frontier mission and school in Spokane. Today, GU has an undergraduate enrollment of 5,160 and another 2,400 students in its graduate programs and Gonzaga Law School.

Over the years, the Catholic university has faithfully cultivated global engagement as a key element of its institutional mission.

Gonzaga’s Jesuits also founded and ran the Amerasian Heritage program, which for many years brought young Amerasians – sons and daughters of U.S. service personnel – to the Spokane campus from Korea, Vietnam, Thailand, Japan, the Philippines and Taiwan to learn English, study for a college degree and discover their American heritage. Also part of the university’s two-way bridge is an acclaimed on-campus English as a Second Language program that has helped more than 4,000 students from all over the world improve their English language skills, delve into American culture and work toward a degree.

“At the very core of Gonzaga’s mission and Jesuit identity is the desire to go out into the world and build connections,” said Joseph Kinsella, director of Gonzaga’s Center for Global Engagement. “We are very intentional in our effort to seek deep engagement and meaningful understanding.”

The goal, Kinsella said, is personal connections that are mutually beneficial and mutually enriching. “I think that’s the metaphor with the basketball team,” he said. “In a world where ESPN controls the schedule and the narrative, we are building a two-way cultural bridge.”

The International Student Barometer, which factors expectations and intentions with the experiences of foreign students at U.S. colleges and universities, ranks Gonzaga No. 1 overall for international student satisfaction and success.

Once they leave school, Gonzaga graduates often continue to pursue global outreach and engagement. For the past four years, GU has ranked tops among all small U.S. colleges and universities in the number of alumni serving around the world with the Peace Corps.

“Our world is profoundly global, multicultural and international,” said Patricia O’Connell Killen, Gonzaga academic vice president. “Globally focused graduates acknowledge that their opportunities and challenges are inextricably linked to people in Syria, South Sudan, the Philippines, the Congo, and every other place in the world.”

Gonzaga President Thayne McCulloh said this reflects the enduring mission to produce enlightened, passionate people who are making a difference in the world. “Gonzaga graduates are committed to improving our world, and daily work to help create a world of peace, justice and greater understanding among people,” McCulloh said.

For Karnowski, the international experience at GU includes not just his teammates but also the Gonzaga students and faculty he encounters daily in the classroom and around campus and the people he meets every day in Spokane and elsewhere.

“Kevin Pangos was my roommate my freshman year and he helped me a lot,” Karnowski said. He has paid the favor forward by reaching out to international players who have come to Gonzaga since he arrived. “They’re a long way from home and I know how they feel,” he said. “It always helps to have a friend. Sometimes, it just helps to have someone show you where you go to get groceries.”

Jacob Larsen, a 7-foot redshirt freshman on this year’s team from Denmark, said talking to Karnowski during his campus visit was a turning point in choosing Gonzaga over other schools offering basketball scholarships. “He reached out to me when I was here,” Larsen said. “He understood the things I was wondering about – basketball, academics, the cultural differences – and he helped make me feel like I could succeed.”

Along with basketball, Gonzaga’s international players get good coaching on adjusting to the rigors of college-level course work and life in a small American city, as well as language help when needed, Karnowski said.

“They’re all unique individuals coming from different backgrounds with different goals, but when they first get here they’re also all wide-eyed 18-year-olds who have never been away from home,” said Steffany Galbraith, director of academic support services for GU athletics.

“For someone . . . from western Canada, it’s much less of an adjustment to come to Spokane for college than it was for Przemek or Rui (Hachimura, a freshman on this year’s team who is from Japan),” Galbraith said. “Along with all of the other demands of coming here to play basketball, Przemek and Rui faced the challenges of a new culture and language.”

Both Karnowski and Hachimura got welcome help through Gonzaga’s ESL program – but that comes on top of a full load of academic work and athletic workouts.

“That was really challenging,” Karnowski said. “I think my biggest fear coming here was knowing that all of my learning – going to class, reading, studying, writing papers, taking tests – was going to be in English. On top of that, I go to practice to fight for my spot on the team and everything with my coaches and teammates is in English.

“Steffany is a big help with scheduling and tutoring,” Karnowski said. “The school does a good job of helping us succeed.”

At Gonzaga, academic expectations are high. GU ranks No. 3 nationally among all NCAA schools for student-athlete graduation rate, trailing only Harvard and Loyola of Chicago, another Jesuit university. In all, six Gonzaga basketball players have earned first team Academic All-American honors, including Karnowski’s teammate Nigel Williams-Goss this year.

Karnowski is himself a serious student – and he’s perhaps prouder of his academic achievements than all that he’s accomplished on the basketball court.

“I feel like I have come so far as a player and as a person at Gonzaga,” he said. “The thing I’m proudest of is that I was able to keep my grade-point average above 3.0 and get my degree on time while playing on one of the top college basketball teams in the country.”