PTSD is not just for veterans, it’s a trauma disorder that affects millions

5-Sep-2019 4:05 PM EDT, by University of Alabama at Birmingham
favorite_border 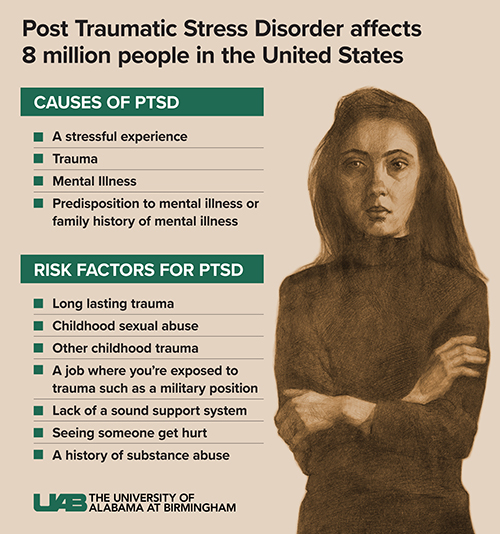 Newswise — BIRMINGHAM, Ala. – Research shows that individuals who suffer with post-traumatic stress disorder, better known as PTSD, have experienced severe trauma at some point in their lives. The trauma could come in the form of sexual assault, a natural disaster, a car accident or anything that would prompt someone to have a harrowing reaction.

However, many believe that PTSD is a mental health condition that affects only those who have come back home from war, but this is not the case.

“We must see PTSD, and other trauma-related disorders, as mental health issues that face many survivors of human rights violations,” said Tina Kempin Reuter, associate professor in the University of Alabama at Birmingham’s College of Arts and Sciences and director for UAB Institute for Human Rights. “Whether they’re survivors of genocide, ethnic cleansing, racial or ethnic persecution, and other forms of direct and indirect violence, many of these individuals continue to battle their traumas across their lifetime.”

PTSD affects 3.5 percent of the U.S. adult population, according to the National Alliance on Mental Illness, or approximately 8 million Americans who live with the condition. Approximately 37 percent of people diagnosed with PTSD display serious symptoms.

The root cause of PTSD is a traumatic event, but the symptoms are what overwhelm people to the point where it is diagnosable. People with PTSD often have recurring, distressing and upsetting memories of the trauma, and continually have upsetting memories that are hard to stop.

Symptoms can include flashbacks, night sweats, insomnia, panic attacks, and isolating themselves from friends and family.

U.S. National Library of Medicine research indicates that, when people experience trauma firsthand, it changes the brain. Several areas of the brain are involved. A stress response includes the amygdala, hippocampus and the prefrontal cortex. PTSD and trauma can cause lasting changes in those areas of the brain.

There are other disorders and mental health conditions that can appear along with PTSD, including generalized anxiety disorder, obsessive compulsive disorder, depression, borderline personality disorder and substance abuse.

Many who experience PTSD also may struggle with suicidal ideation and may attempt to take their life.

How to cope with trauma

PTSD is not necessarily preventable because individuals cannot control when trauma happens. However, they can be equipped to cope with the trauma afterward.

Reuter says it is vital to seek mental health treatment in the form of therapy and, if needed, a psychiatrist, after someone experiences a traumatic event.

“Significant barriers can prevent many individuals living with PTSD and other trauma-related disorders from seeking the treatment they need,” Reuter said. “These barriers include lack of access or knowledge about mental health resources, lack of insurance to pay mental health providers, physical disability or other disability preventing individuals to access care, discrimination, and the stigma often associated with seeing a counselor.”

Reuter says that, in recent years, the global mental health community has worked to address these and other barriers by promoting “e-counseling” — that is, communicating with therapists and mental health professionals over the phone or computer.

“Programs like BetterHelp can assist people living with PTSD to find and utilize the counseling they need,” Reuter said. “We hope that, as more individuals living with PTSD take advantage of these services, they are able to live fuller and healthier lives.”

Reuter notes that PTSD is a treatable mental illness, and many experiencing it are not alone. Seeking help from a mental health professional is a first step, whether that is working with someone in their local area or finding the help of an online counselor, like one at UAB partner BetterHelp, which provides treatment plans for those suffering with PTSD.

Healing from trauma can be difficult, but it is possible. If you are experiencing PTSD, seek help from available resources. And if you know someone who is experiencing PTSD, encourage them to do the same. The Substance Abuse and Mental Health Services Administration national helpline is 1-800-662-HELP (4357).