In a nationally-representative survey of more than 2,000 adults across the U.S., three children’s health concerns emerged as top policy priorities for this year’s candidates for President. 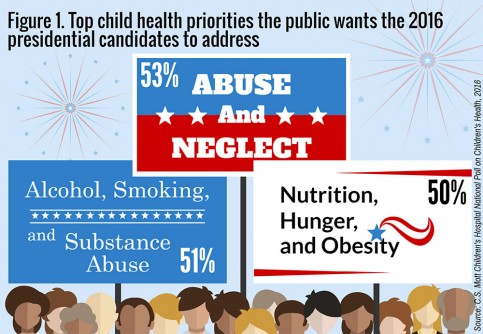 Newswise — ANN ARBOR, Mich. – As Republican and Democratic parties prepare for national conventions this summer, campaign speeches are filled with promises about everything from health care to the economy and national security.

But a national poll suggests presumptive presidential candidates Hillary Clinton and Donald Trump may want to consider their positions on a less-talked about topic: children’s health.

In May 2016, U.S. adults were asked to identify the top three child health priorities they want to see presidential candidates address this year. Fifty percent or more of adults selected abuse and neglect; alcohol, smoking and substance abuse; and nutrition, hunger and obesity. The findings were released in today’s report from the C.S. Mott Children’s National Poll on Children’s Health at the University of Michigan.

“Children’s health has not necessarily been a major topic in the primary season, but we know from our previous research in this arena that a majority of adults say that a candidate’s position on child health issues can affect their vote in November,” says Matthew M. Davis, M.D., M.A.P.P., director of the National Poll on Children’s Health and professor of pediatrics and internal medicine at C.S. Mott Children’s Hospital.

“The public has a strong interest in improving children’s health and clearly wants their next president to share those priorities.”

A national sample of more than 2,000 adults selected their top three child health priorities for presidential candidates, from a list of eight child health concerns. The choices were based on prior research from the National Poll on Children’s Health about the public’s leading concerns about big health problems for children across the nation. The choices from each respondent were then aggregated to come up with a rank order of all the possible priorities.

Child abuse and neglect was identified most frequently by the public as a child health priority for presidential candidates (53 percent). Alcohol, smoking and drug use (51 percent), as well as nutrition, hunger and obesity (50 percent) also topped the list.

“We know that many Americans perceive children’s health being worse today than when they were kids, themselves. There is a strong sentiment among adults today that children face a lot of health challenges. That high level of concern translates into these priorities for the presidential candidates,” Davis says. “While presidential candidates face many competing demands and expectations for the policy positions they support in their campaigns, our findings suggest that focusing on child health priorities may resonate deeply with voters.”

Davis notes that policy priority areas identified by at least half of U.S. adults in this poll raise a key question: what can a President do about these concerns?

The Mott poll report team identifies corresponding policy options for each of the most commonly identified priorities:

Abuse: Child abuse and neglect is known to affect over half a million children in the U.S. every year. The negative effects of abuse/neglect on individuals’ health in childhood and well into adulthood are increasingly clear. The federal government shares responsibility for addressing child abuse and neglect with state and local agencies. Policy options for the federal government include expanding and intensifying programs that support parents and teach parenting skills during children’s early years (e.g., under age 3), including home visiting programs that begin during pregnancy.

Substance use: Rates of underage alcohol use have been declining over recent years, although about one-fifth of high-school-age teens report alcohol use in the past month and binge drinking also remains a problem. Youth tobacco use has decreased to its lowest level in decades while electronic cigarette use has surpassed conventional cigarette smoking. The two main policy avenues for alcohol and tobacco include:

1. To raise use taxes, which are known to reduce underage use2. To improve, innovate, and invest in novel messaging to help shape community norms to discourage underage use because of negative health effects. The Food and Drug Administration has also declared that it will regulate e-cigarettes as a tobacco product. For drug use, the leading policy options are to intensify messaging in schools and communities to discourage experimentation among youth, and to invest in and improve enforcement of existing drug laws to reduce access. The federal government may also issue prescribing restrictions for physicians to limit access to opioid medications that can be misused.

Nutrition, hunger and obesity: The interrelated challenges of nutrition, hunger, and obesity have been the focus of increasing policy attention over the past two decades. Together, hunger and obesity may affect as many as one-third of all youth in the U.S. The leading federal policy options are to promote access to, interest in, and affordability of healthier foods, especially for low-income children families. Encouraging physical activity and avoiding extended sedentary time is also essential for health, and ensuring that neighborhoods are safe is critical to promoting more active lifestyles for all generations.