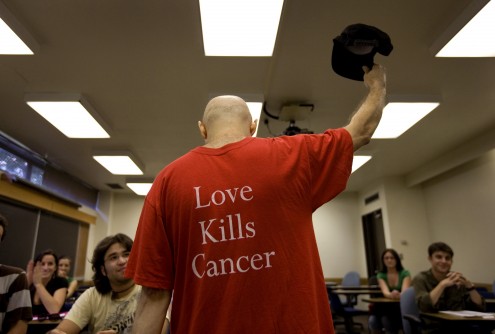 On the first day of his international journalism class at the University of Florida, Kaplan tips his cap to his students after explaining he had been diagnosed with cancer. Despite six months of chemo treatments, he never missed a class but was not permitted by his doctors to fly with his “Florida FlyIns” students to Guatemala.

Newswise — Pulitzer Prize-winning photojournalist John Kaplan has taken on a new challenge: to give away 10,000 DVD copies of his new nationally acclaimed autobiographical film, Not As I Pictured to anyone affected by cancer. Diagnosed at age 48 with a potentially deadly form of lymphoma, Kaplan “turned the lens on himself” and chronicled his experience in this moving visual journal. An educational kit produced in collaboration with the American Society of Clinical Oncology (ASCO) accompanies the DVD, addressing the emotional side of cancer with coping and lifestyle tips for patients, caregivers and survivors. Kaplan, a University of Florida professor of journalism, husband and father of two young children, says, “The film uses anything but the typical melancholy, clichéd approach toward cancer stories. Not As I Pictured is upbeat and life affirming.”

The film will air on PBS stations nationwide beginning in September.

With help from his family, doctors, and even Mother Teresa and a rock star, Kaplan shares the same boundless determination and powerful storytelling ability that helped him become one of America’s best-known photojournalists. Although the topic is serious, the film is positive and ends with the news of Kaplan’s complete remission and return to good health.

“During my treatment, we received so much unexpected help along the way, often from strangers,” he says. “By giving away the film, I’m determined to give some of that back.”

One in three Americans will get cancer, touching nearly every family in the nation. According to the Centers for Disease Control & Prevention, 11.7 million Americans are now cancer survivors – more than ever before. Many cancers today are beginning to be looked at as chronic illnesses, rather than death sentences. Kaplan’s cancer diagnosis forever changed his outlook. “Your priorities become crystal-clear, immediately. The veneer is stripped away. I just want to be alive to see my kids grow up.”

Those touched by cancer, including doctors and those who provide health care and support services to patients and families, have much to take away from this inspiring film. Cancer centers and medical practices routinely use the film and its accompanying ASCO cancer coping guide for newly diagnosed patients, survivorship programs, and support groups. Kaplan shares his motivational story at oncology conferences, hospitals, and support centers nationwide. He has screened the film in 12 states and two countries, with plans to schedule more. A touring photographic exhibition can accompany his presentations at venues such as medical conferences, patient summits, and community events.

Many well-known musicians donated musical rights for the film soundtrack, including Michael Stipe and R.E.M., Chris Martin of Coldplay, David Bowie, will.i.am of the Black Eyed Peas, Justin Timberlake, Pantera, and the Cowboy Junkies. Their contributions helped the film win Best Soundtrack at the 2010 Maverick Movie Awards, and the ADDY Best of Show for Public Service.

The impact of Kaplan’s film among patients, caregivers, and the medical community is evidenced by posts at the Not As I Pictured Facebook page. Kathy, whose husband is in treatment, shares, “I was greatly moved. It would have touched me before, but now that we are dealing with a diagnosis of aggressive illness in my husband, it means far more. I am in awe of your film.”

John Kaplan’s leading honors include the Pulitzer Prize for Feature Photography in 1992. He is also a Fulbright Scholar, winner of the Overseas Press Club Award and been named national Newspaper Photographer of the Year.

Visit http://www.NotAsIPictured.org to view the film trailer, order a free copy for personal use, download a media kit, or inquire about John’s availability to speak in your community. The website also features extensive ASCO educational resource links. Although the film is free for personal use, organizations and libraries pay license fees that help support the program’s long-term humanitarian goals. Not As I Pictured has 501(c)(3) charity status and welcomes donations. To join the conversation about the film, please visit http://www.facebook.com/NotAsIPictured.