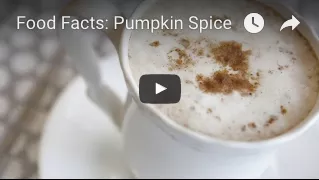 Newswise — In this fact sheet and the associated video, food scientist Kantha Shelke, PhD, CFS answers questions about the science behind the popular fall drink, the pumpkin spice latte.

What are some common ingredients that are found in pumpkin spice lattes? The major and common ingredient in pumpkin spice lattes include: cinnamic aldehydes for cinnamon, eugenol for clove or allspice, terpenes such as sabinene for nutmeg, and zingiberene for ginger. They may also contain vanillin and cyclotene for the burnt butter or maple notes to round off the flavor.

Are most ingredients found in different coffee brand’s pumpkin spice lattes similar?The recipe for pumpkin spice lattes is not set in stone, and commercial recipes can change depending on the region of the country. But, they typically contain cinnamon, nutmeg, ginger, and clove or allspice. Is it possible to make a pumpkin spice latte at home using spices or similar flavors? Yes, but it will probably taste more like Indian masala tea – popularly known as chai in the Western world and less like the pumpkin spice latte you’re used to getting at a coffee shop.

Why is pumpkin spice such a trendy flavor? People in the Western culture associate pumpkin pie with the holidays, family gatherings, and nostalgia.

Starbucks and other companies are now using real pumpkin for their PSL—what is involved in making this change?The inclusion of real pumpkin in the Starbucks PSL is achieved by the addition of a Pumpkin Spice flavored sauce that consists of sugar, condensed skim milk, and pumpkin puree, two percent or less of fruit and vegetable juice for color, natural flavors, annatto (color), potassium sorbate (preservative), and salt. The amount of pumpkin puree added does very little other than appease those who wanted to see real pumpkin on the list of ingredients.

Did the addition of real pumpkin affect the flavor?The food scientists at Starbucks ensured the ingredients would replicate the flavor of the original PSL that was made without real pumpkin. The flavor and texture are the same but with a different set of ingredients.Does the addition of pumpkin puree make it healthier?The amount of pumpkin puree in the Starbucks Pumpkin Spice Latte is so miniscule that it does not change its nutritional value appreciably.

About IFTFounded in 1939, the Institute of Food Technologists is committed to advancing the science of food. Our non-profit scientific society—more than 17,000 members from more than 95 countries—brings together food scientists, technologists and related professionals from academia, government and industry. For more information, please visit ift.org.