'Putting Prevention in Their Pockets' 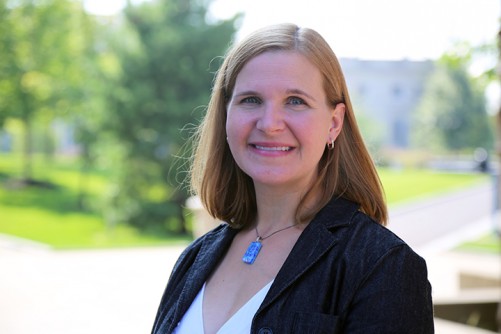 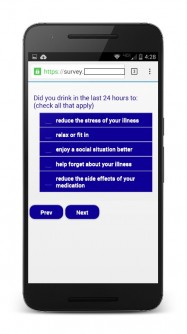 Screen shot of DRUM app question asking study participants about why they drank (if they answered yes to the previous question asking if they consumed alcohol in the past 24 hours).

Newswise — BUFFALO, N.Y. – Would people living with HIV be willing to self-report on daily substance use and antiretroviral therapy (ART) adherence using a smartphone app?

That was a question researchers from the University at Buffalo set out to answer in a recent study. They were pleased to find that participants not only found the app easy and convenient to use — they were also willing to provide honest responses.

“Reporting was actually high – we had 95 percent compliance with daily report completion. A key finding of our study was the ability for people living with HIV to feel comfortable reporting on sensitive health behaviors,” said Sarahmona Przybyla, the study’s lead author and clinical assistant professor of community health and health behavior in UB’s School of Public Health and Health Professions.

A willingness to report the use of alcohol or drugs was significant because substance use is one of the most reliable predictors of poor adherence to ART, the researchers note.

Their findings, published this month in the journal AIDS Research and Treatment, were more surprising considering that the majority of the 26 study participants had never used a smartphone before. After some initial smartphone training from research staff, they completed their reports with ease.

Participants were recruited from two Buffalo-area clinics and were asked to use the app — named Daily Reports of Using Medications, or DRUM — to complete their reports, which took three to five minutes, between 4 p.m. and 6 p.m. each day for two weeks.

Every afternoon, the 26 study participants received a text message reminder asking them to fill out their report. If they missed that day’s report, they were given the option to do a make-up when they logged into the app the next day.

Researchers were deliberate in their wording of the questions. “People living with HIV continue to be a stigmatized population, so we didn’t want any of the questions we developed to draw attention to their disease. We never used ‘HIV’ or ‘ART’ – anything that would inadvertently out someone as having HIV,” said Przybyla, Phd, MPH.

A sample medication question was, “Did you take your first dose?” A change in daily routine was the most commonly reported reason participants didn’t take their medication, followed by simply forgetting. Use of alcohol or drugs was the third most common reason.

Participants who confirmed they had used alcohol or drugs in the past 24 hours were given a series of follow-up questions that asked why they used the substance and where they were when they used it, with a dropdown menu of answer choices.

Each participant was provided with a five-digit passcode to access the app, ensuring privacy and confidentiality. Data from the completed reports was sent in real time directly to UB’s Research Institute on Addictions, which helped develop the app along with Przybyla.

In the future, the app could aid in users’ decision to use alcohol since some participants in this study reported that it helped them understand exactly how much they were drinking.

And it helped users establish a pattern. “I think the surprising thing is how much the app and the text reminders helped the participants to develop a routine,” said Rebecca Eliseo-Arras, a study co-author and senior research analyst at UB’s Research Institute on Addictions.

“For instance, some reported that the text message reminded them to do the report, but the report actually made them think about whether or not they took their medication and, if they didn't, that it prompted them to go take their medications," added Eliseo-Arras, PhD, MSW.

Participants completed 347 out of 364 possible daily reports over the two-week span. They reported drinking alcohol on 51.6 percent and marijuana use on 35.4 percent of reporting days.

In follow-up interviews after the two weeks, researchers asked study members about their experience using the app. “Many said it was a piece of cake and that they actually looked forward to doing their daily reports,” Przybyla said. “We also asked people where they were when they completed their reports. A lot of them said they were out and about. They never felt like they had to go hide in a bathroom to fill out the survey each day.”

Przybyla said it’s important to note that the average time since diagnosis among study participants was 17 years and that many of their friends and relatives were likely aware they had HIV. As a result, participants probably felt more comfortable completing the reports around others than someone who was more recently diagnosed and may not have been open about disclosing their disease status to others.

Three-quarters of the sample was male, and slightly more than half were African American. The average age was 48.

The app could help lead to quicker intervention in cases where a patient has missed a number of doses.

“Life expectancy has changed dramatically as a result of advances in pharmacotherapy, which is wonderful, but adherence is key. You can live a long, healthy life with HIV, but you have to take your meds,” said Przybyla, who is interested in studying the role mobile technology can play in understanding health behaviors.

“Now that we have this data, we can reach out to people with HIV and say, ‘We’ve noticed you’ve been using substances and that seems to be related to the fact that you’ve missed your doses — what can we do to help you?’ It’s putting prevention in their pockets.” 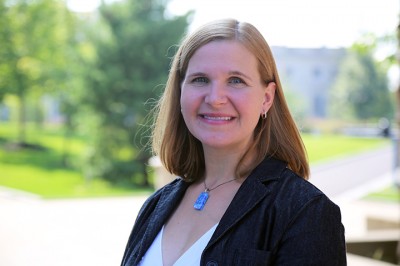 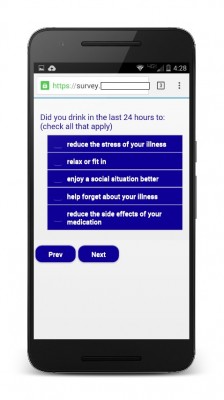 Caption: Screen shot of DRUM app question asking study participants about why they drank (if they answered yes to the previous question asking if they consumed alcohol in the past 24 hours).