By growing crystals in solution, researchers have demonstrated a new colloidal technique for making optoelectronic emitters 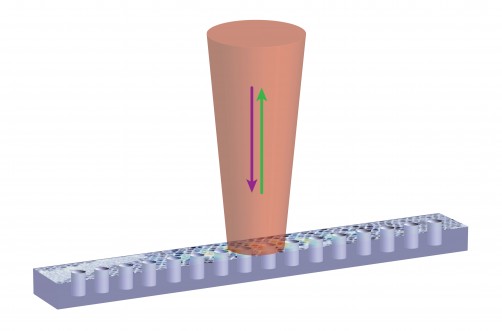 The coupled device between the photonic crystal nanobeam cavity and perovskite nanocrystals, which overlays with the cavity mode profile. The arrows indicate that the excitation and generated signal are coupled in and out of the device vertically.

Newswise — WASHINGTON, D.C., November 28, 2017 -- Tapping into the quantum properties of photons for optoelectronics requires highly efficient light sources. Lead trihalide perovskite nanocrystals exhibit a number of properties that make them promising candidates as light sources. Although coupling quantum emitters with nanophotonic cavities can significantly boost efficiency, this approach has not been explored with these nanocrystals.

Now, a group of researchers at the University of Maryland and ETH Zurich has demonstrated a simple approach for coupling solution-synthesized cesium lead tribromide (CsPbBr3) perovskite nanocrystals to silicon nitride (SiN) photonic cavities. The resulting room temperature light emission is enhanced by an order of magnitude above what perovskites can emit alone. Doctoral candidate Zhili Yang and others report their results this week in Applied Physics Letters, from AIP Publishing.

“Our work shows that it is possible to enhance the spontaneous emission of colloidal perovskite nanocrystals using a photonic cavity,” Yang said. “Our results provide a path toward compact on-chip light sources with reduced energy consumption and size.”

The use of solutions to make colloidal quantum emitters contrasts with the fabrication of epitaxial materials, a widely used process that involves growing crystalline overlayers on an existing substrate. Instead, Yang said, one can directly deposit colloidal nanocrystals using solvents more easily on different kinds of wafers.

Similar perovskite materials are already promising in photovoltaic settings, and they also exhibit a number of properties that make them promising candidates for light-emitting devices.

“The nanocrystals have a low density of defects that can trap carriers [electrons and holes], producing a very low nonradiative decay rate and a high photoluminescence efficiency at room temperature,” Yang said.

Attempts to emit light with epitaxial materials have generally fallen short of efficiently covering the visible light spectrum, with the wavelength range in the blue-green being particularly problematic. The device that the team demonstrated exhibited emission centered at 510 nanometers in the green.

“The large challenge with this method, however, is that you have to find a very optimized concentration [density] of the crystals on the surface of the cavity,” Yang said. “It can’t be too condensed or else it will be detrimental to the cavity and might lead to nonconformity.”

The coupled nanocrystals and nanocavity boasted a tenfold improvement in emission brightness compared to the emitters alone. It resulted in a spontaneous emission rate enhancement of 2.9, reflecting a nearly threefold increase in the photon emitting efficiency within the cavity compared to perovskites on unpatterned surfaces.

The results are a boon to optoelectronics, Yang said, a field that leverages the quantum effects of photons on electronic materials to help build optical circuits that won’t suffer from some of the inefficiencies of purely electronic devices, such as heating. Optoelectronic devices also enjoy faster processing speeds and broader signal bandwidths, and may one day be used in quantum computing and quantum communication networks.