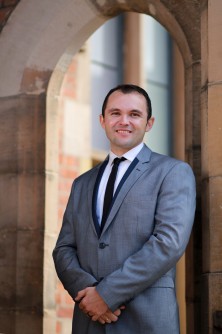 Newswise — A Queen’s University researcher has led an international team of scientists to the discovery of a new material, which could finally bring an end to the misery of cracked smartphone and tablet screens.

Currently, most parts of a smart phone are made of silicon and other compounds, which are expensive and break easily, but with almost 1.5 billion smart phones purchased worldwide last year, manufacturers are on the lookout for something more durable and less costly.

Dr Elton Santos from Queen’s University’s School of Mathematics and Physics, has been working with a team of top-notch scientists from Stanford University, University of California, California State University and the National Institute for Materials Science in Japan, to create new dynamic hybrid devices that are able to conduct electricity at unprecedented speeds and are light, durable and easy to manufacture in large scale semiconductor plants.

The team found that by combining semiconducting molecules C60 with layered materials, such as graphene and hBN, they could produce a unique material technology, which could revolutionise the concept of smart devices.

The winning combination works because hBN provides stability, electronic compatibility and isolation charge to graphene while C60 can transform sunlight into electricity. Any smart device made from this combination would benefit from the mix of unique features, which do not exist in materials naturally. This process, which is called van der Waals solids, allows compounds to be brought together and assembled in a pre-defined way.

Dr Elton Santos explains: “Our findings show that this new ‘miracle material’ has similar physical properties to Silicon but it has improved chemical stability, lightness and flexibility, which could potentially be used in smart devices and would be much less likely to break.

“The material also could mean that devices use less energy than before because of the device architecture so could have improved battery life and less electric shocks.”

He added: “By bringing together scientists from across the globe with expertise in chemistry, physics and materials science we were able to work together and use simulations to predict how all of the materials could function when combined – and ultimately how these could work to help solve every day problems.

“This cutting-edge research is timely and a hot-topic involving key players in the field, which opens a clear international pathway to put Queen’s on the road-map of further outstanding investigations.”

The project initially started from the simulation side, where Dr. Santos predicted that such assembly of hBN, graphene and C60 could result in a solid with remarkable new physical and chemical properties. Then, he talked with his collaborators Professor Alex Zettl and Dr. Claudia Ojeda-Aristizabal at the University of California, and California St University in Long Beach (CA) about the findings. There was a strong synergy between theory and experiments throughout the project.

Dr Santos said: “It is a sort of a ‘dream project’ for a theoretician since the accuracy achieved in the experiments remarkably matched what I predicted and this is not normally easy to find. The model made several assumptions that have proven to be completely right.”

The findings, which have been published in one of the most prestigious journals in the world ACS Nano, open the doors for further exploration of new materials. One issue that still needs to be solved with the team’s current research is that graphene and the new material architecture is lacking a ‘band gap’, which is the key to the on-off switching operations performed by electronic devices.

However, Dr Santos’ team is already looking at a potential solution - transition metal dichalcogenides (TMDs). These are a hot topic at the moment as they are very chemically stable, have large sources for production and band gaps that rival Silicon.

He explains: “By using these findings, we have now produced a template but in future we hope to add an additional feature with TMDs. These are semiconductors, which by-pass the problem of the band gap, so we now have a real transistor on the horizon.”