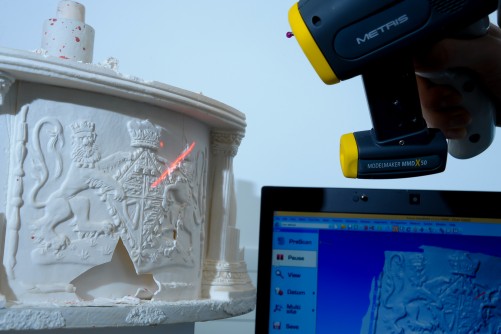 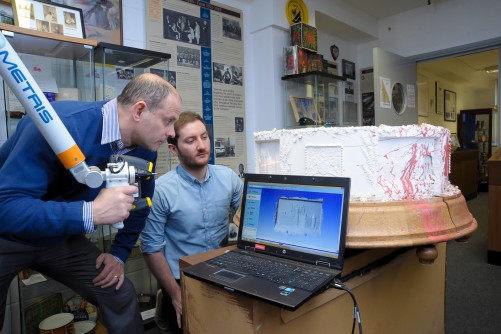 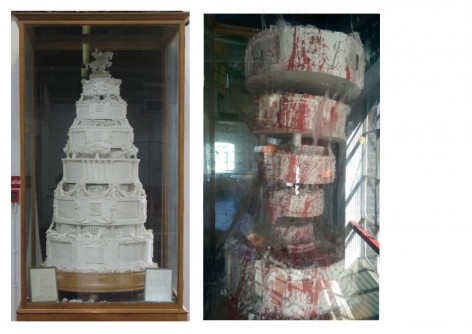 The cake before and after restoration.

Newswise — Cutting-edge technology has brought Queen Elizabeth II’s wedding cake back to life – thanks to research by WMG at the University of Warwick.

Professor Mark Williams at WMG, alongside the British Sugarcraft Guild (BSG), employed 3D scanning technology to recreate a full-sized replica of a wedding cake presented to Queen Elizabeth II and Prince Philip – which was almost totally destroyed by vandals in 2015.

The technology was able to accurately scan the cake to within 0.1mm and reproduce a high-resolution 3D model that was then be used to digitally repair the cake.

Analysing the surviving parts of the cake – an intricate 6ft ensemble, consisting of 6 tiers – Professor Williams was able to discover exactly how it was formed, and to determine precisely how to restore its original grandeur.

The historic cake – which was originally created by Peek Frean in 1947 - weighed six hundred pounds, and at the top stood a silver model of St George and the Dragon, which was given to the royal couple as a souvenir.

Queen Elizabeth wrote how she and Prince Philip “admired the beauty of its design and the excellence of its quality.”

The life-sized model was displayed in the Peek Frean & Co factory until its closure in 1989. A permanent exhibition about the company later opened in a South-East London museum – of which the cake was a major part – although during a change of premises for the museum, the cake was left behind, as it was too delicate and precious to transport.

During this time, the iconic cake was vandalised, and almost completely destroyed – but will now be returned to its former glory, thanks to the innovative solutions offered by WMG.

“It was fantastic to apply our technology to such an exciting project and help restore such an iconic cake to its former glory, especially in the year of the Queen’s Golden Anniversary.

"Usually we are working on engineering-related challenges, so to be able to take our expertise and transfer that to something totally different and so historically significant was a really interesting opportunity.”

The tiers of the cake were distributed to the seven BSG regions in the early Autumn 2016 together with the materials, templates and plans for the relevant tier. Initial coating of the cakes has been completed and the cakes are now ready for the detailed decoration to commence.

BSG Members’ Workshops are taking place during March in the South East, Northern England, Scotland & Northern Ireland and the Chiltern Hills and East Anglia. Workshops will also be held in Central England and Wales & the South West during the early Spring.

Piped trellis and flowers, moulded side panels and other detailed decoration will be produced during these workshops. A small team from the BSG will do the final assembly of the cake at the Museum in the late summer.

“The British Sugarcraft Guild was honoured to be invited to recreate the replica of the Queen’s wedding cake for the Peek Frean Museum. Our members have shown enormous enthusiasm for the project and the generosity of all our sponsors has been amazing.

“The experience of working with WMG at the University of Warwick in creating the 3D models to enable the moulded elements of the cake to be reproduced has been very rewarding. It illustrates perfectly how modern technology and traditional crafts can work in harmony to recreate such an important historic piece of sugar art.”