Bruce Winstein discusses the QUIET experiment, which will explore physics at ultra-high energies generated at the birth of the universe.

The QUIET experiment in operation in the Atacama Desert. The receiver in the mount on the roof of the building rapidly scans the sky, looking for radiation emitted shortly after the birth of the universe. 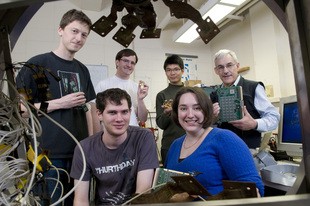 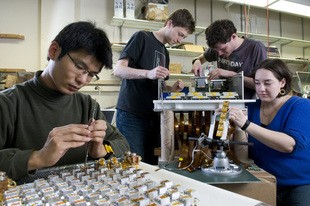 Newswise — A tiny fraction of a second following the big bang, the universe allegedly experienced the most inflationary period it has ever known.

During this inflationary era, space expanded faster than the speed of light. It sounds crazy, but it fits a variety of cosmological observations made in recent years, said University of Chicago physicist Bruce Winstein.

"Theorists take it to be true, but we have to prove it," said Winstein, the Samuel K. Allison Distinguished Service Professor in Physics at the University of Chicago. "It needs a real test, and that test is whether or not gravity waves were created."

Winstein and his Chicago associates are part of the international QUIET (Q/U Imaging ExperimenT; the Q and U stand for radiation parameters called Stokes parameters) collaboration that has devised such a test.

QUIET's goal: detect remnants of the radiation emitted at the earliest moments of the universe, when gravity waves rippled through the very fabric of space-time itself.

The intensive gravitational fields that existed at these earliest moments, according to Einstein, produced gravity waves that alternatively compressed and expanded space, first in one direction, then another. The cosmic microwave background (CMB) radiation—the afterglow of the big bang—may still carry a faint signature of those gravitational waves, nearly 14 billion years after their creation.

Other collaborations, including the South Pole Telescope (SPT), seek the same ethereal quarry with different techniques. The University of Chicago's Kavli Institute of Cosmological Physics supports both projects.

"No one can say what the best approach is right now," Winstein said, "but we need a variety of attacks on this important problem, and ours is different from most of the others. It's very exciting to be in this game."

At stake is the potential elucidation of new physics, that which falls outside the scope of the standard model. This model, a set of theories that describes the behavior of matter and energy in the universe, cannot explain how points in the sky too far away to have ever been in contact have almost exactly the same temperature. A validation of inflation would solve that problem.

"If we see these gravity waves, they have been called the smoking gun of inflation," Winstein said.

The QUIET experiment began operating last October with an antenna array that contains 19 detectors. Since then, QUIET collaborators at the Jet Propulsion Laboratory in California have produced 91 detectors sensitive to the radiation at a higher frequency.

Over the past several months, the Chicago collaboration has assembled and calibrated these 91 detectors in the basement of the Laboratory for Astrophysics and Space Research.

Winstein's team has tested each detector, adjusting 10 critical voltages for each to yield the best performance. Correctly optimized voltages can improve detector performance by a large factor, Winstein said, making it possible to observe in one day what would have otherwise required a week. This newer, more sensitive array will begin operating in June.

The QUIET experiment operates in Chile's Atacama Desert, at an altitude of 17,000 feet. "It's very dry, and that's important because this microwave radiation gets absorbed by water vapor," Winstein explained. "And we observe day and night, 10 to 11 months a year."

Observations will continue at least until the end of this year. The team must keep its detectors at a chilling minus 253 degrees Celsius (minus 423 degrees Fahrenheit, close to absolute zero) to boost the odds of detecting the extremely weak gravity-wave signals. These signals would be so weak that electronic noise could easily drown them out.

"One way to eliminate electronic noise is to get your detector very, very cold," said QUIET's Allison Brizius, a graduate student in physics. "The colder it gets, the quieter it gets, the better it can pick up a signal."

The QUIET experiment must both detect and amplify the signal, which puts out only about a billionth of a volt.

"We have to be very careful with such small signals not to introduce any other noise," Winstein said. "We've demonstrated that this technology works, and we're proposing to mass-produce these modules, nearly 2,000 of them."

Winstein comes from a particle physics background, a veteran of 30 years of experimental research at Fermi National Accelerator Laboratory, which also plays a role in QUIET. As a particle physicist, he was exploring physics at the highest energies that an accelerator could then achieve.

Now, as a cosmological physicist probing the CMB, he stands on the brink of reaching nearly to the Planck scale, the highest energies that the universe can create. The CMB, he said, is "probably our best handle on the overall structure of the universe and how it was born."