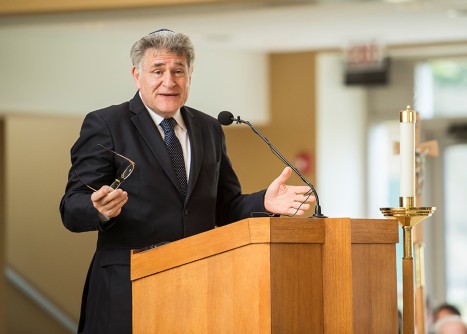 Rabbi Abraham Skorka delivers the keynote address at the dedication of “Synagoga and Ecclesia in Our Time,” 9/25/15

Newswise — PHILADELPHIA (February 19, 2018) — Saint Joseph's University President Mark C. Reed, Ed.D., announced today the appointment of Rabbi Abraham Skorka, Ph.D., as University Professor beginning in the fall of 2018. He will work closely with the directors of the University’s Institute for Jewish-Catholic Relations to develop and expand its educational and research programs with the goal of promoting deeper understanding between Catholics and Jews.

Rabbi Skorka served for almost 20 years as the rector of the Seminario Rabínico Latinoamericano Marshall T. Meyer in Buenos Aires, Argentina. The seminary prepares rabbis, cantors and educators from throughout Latin America in the Masorti or Conservative Jewish tradition. He also taught Talmud and rabbinic literature there and was dean of its rabbinical school. In addition, he has served for decades as a rabbi for the Benei Tikva Congregation in Buenos Aires.

“Rabbi Skorka has a gift for pastorally relating the rabbinic tradition to contemporary issues,” says Dr. Reed. “His presence on our campus will benefit the institute, the University and the broader community.”

Following in the footsteps of his mentor, Rabbi Marshall T. Meyer, a disciple of Rabbi Abraham Joshua Heschel, Skorka has been deeply committed to interreligious dialogue for his entire career. In the 1990s, he found a new Catholic partner with whom to share this commitment when he was introduced to an auxiliary bishop named Jorge Mario Bergoglio. Throughout the years, as Bergoglio became archbishop and then cardinal archbishop of Buenos Aires, he and Skorka collaborated on many projects, including a series of television programs of informal dialogues together and a book of their conversations, On Heaven and Earth. The two friends have recently expressed how much their dialogues have personally meant to them in a short video available here.

Institute Director and Professor of Theology Philip A. Cunningham, Ph.D., observes that “Rabbi Skorka’s lifelong dedication to dialogue made him the perfect keynote speaker when Saint Joseph's University dedicated the sculpture Synagoga and Ecclesia in Our Time on September 25, 2015.”

Crafted by local artist Joshua Koffman, the work depicts the female figures of Synagogue and Church studying their respective scriptures together. When two days later, Cardinal Bergoglio, who had been elected Pope Francis in 2013, visited the University to bless the artwork, Skorka greeted him with the words, “They are you and I — Pope and Rabbi learning from one another!”

“The vision of Catholics and Jews learning and studying together as friends defines the mission of the Institute for Jewish-Catholic relations,” says the institute’s Assistant Director and Assistant Professor of Jewish Studies, Adam Gregerman, Ph.D. “It is a vision that Rabbi Skorka shares, which is why we are thrilled that he will be working with us at Saint Joseph’s.”

Rabbi Skorka is also looking forward to coming to the University. “Interfaith dialogue is a crucial tool to overcome conflicts and is indispensable in paving the way for a better world,” he observes. “After many years promoting such dialogue in Latin America and around the world, I am eager to join the dynamic team that Professors Cunningham and Gregerman have formed and develop new projects with them in the United States.”

To be informed of developments at the Institute as they are announced, visit its website and sign-up to receive email notifications of its programs.