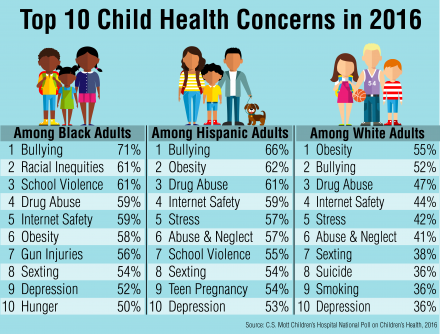 Among black adults, 61 percent believe racial inequities are “a big problem” for children in the U.S., compared to 17 percent of white adults and 45 percent of Hispanic adults.

Among black adults, 61 percent believe racial inequities are “a big problem” for children in the U.S., compared to 17 percent of white adults and 45 percent of Hispanic adults, according to the 2016 annual survey of top children’s health concerns by the C.S. Mott Children’s Hospital National Poll on Children’s Health.

Racial inequities and school violence were No. 2 and No. 3 on the list of child health concerns among black Americans. Gun injuries — which did not make any other group’s top 10 list — ranked seventh.

The findings come in the wake of a series of high-profile news events regarding racial inequities and safety among black youth.

“This year’s survey taps into some key differences across racial and ethnic groups on which issues are viewed as the biggest problems for children in our country,” says poll co-director Gary Freed, M.D., M.P.H., professor of pediatrics at U-M’s C.S. Mott Children’s Hospital and founding director of the Child Health Evaluation and Research (CHEAR) Unit.

“One of the most striking differences was seen in how black and white respondents viewed racial inequity: black adults, but not their white counterparts, recognize unequal treatment as a child health concern. In addition, the top 10 rating among black adults for school violence and gun-related injuries mirror national attention regarding the safety of black youth.”

“We continue to see increasing concern for children’s mental health. There is a great need for children to have access to mental health professionals who can diagnose and treat stress, depression and other mental health conditions as well as prevent suicide,” Freed says.

For the first time in the NPCH survey, suicide made the top 10. With teen suicide now the second-leading cause of death among adolescents, new guidelines from the American Academy of Pediatrics also recently called for teen check-ups to include suicide risk screening.

The high concern for mental health issues among youth is consistent with previous Mott poll findings. An April 2016 poll found more than half of adults perceive the mental/emotional health of kids today to be worse than when they were kids. The public pointed to several factors, including higher stress and diminished quality family time.

Bullying, obesity and drug abuse remained the top concerns for a third year in a row overall. Other health concerns in the Top 10 included internet safety, child abuse and neglect and sexting.

This is the tenth year adults were asked to rate their concerns for kids’ health in the C.S. Mott Children’s Hospital Poll.