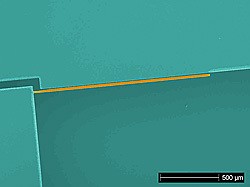 NIST physicists used radio waves to cool this silicon micro-cantilever, the narrow orange strip across the middle of this colorized micrograph. The cantilever, created by ion etching through a silicon wafer, lies parallel to a silicon radio-frequency electrode.

Newswise — Visible and ultraviolet laser light has been used for years to cool trapped atoms—and more recently larger objects—by reducing the extent of their thermal motion. Now, applying a different form of radiation for a similar purpose, physicists at the National Institute of Standards and Technology (NIST) have used radio waves to dampen the motion of a miniature mechanical oscillator containing more than a quadrillion atoms, a cooling technique that may open a new window into the quantum world using smaller and simpler equipment.

Described in a forthcoming issue of Physical Review Letters,* this demonstration of radio-frequency (RF) cooling of a relatively large object may offer a new tool for exploring the elusive boundary where the familiar rules of the everyday, macroscale world give way to the bizarre quantum behavior seen in the smallest particles of matter and light. There may be technology applications as well: the RF circuit could be made small enough to be incorporated on a chip with tiny oscillators, a focus of intensive research for use in sensors to detect, for example, molecular forces.

The NIST experiments used an RF circuit to cool a 200 x 14 x 1,500 micrometer silicon cantilever—a tiny diving board affixed at one end to a chip and similar to the tuning forks used in quartz crystal watches—vibrating at 7,000 cycles per second, its natural "resonant" frequency. Scientists cooled it from room temperature (about 23 degrees C, or 73 degrees F) to -228 C (-379 F). Other research groups have used optical techniques to chill micro-cantilevers to lower temperatures, but the RF technique may be more practical in some cases, because the equipment is smaller and easier to fabricate and integrate into cryogenic systems. By extending the RF method to higher frequencies at cryogenic temperatures, scientists hope eventually to cool a cantilever to its "ground state" near absolute zero (-273 C or -460 F) , where it would be essentially motionless and quantum behavior should emerge.

Laser cooling is akin to using the kinetic energy of millions of ping-pong balls (particles of light) striking a rolling bowling ball (such as an atom) to slow it down. The RF cooling technique, lead author Kenton Brown says, is more like pushing a child on a swing slightly out of synch with its back-and-forth motion to reduce its arc. In the NIST experiments, the cantilever's mechanical motion is reduced by the force created between two electrically charged plates, one of which is the cantilever, which store energy like electrical capacitors. In the absence of any movement, the force would be stable, but in this case, it is modulated by the cantilever vibrations. The stored energy takes some time to change in response to the cantilever's movement, and this delay pushes the cantilever slightly out of synch, damping its motion.

A high-resolution version of the accompanying image can be found at http://patapsco.nist.gov/ImageGallery/details.cfm?imageid=385