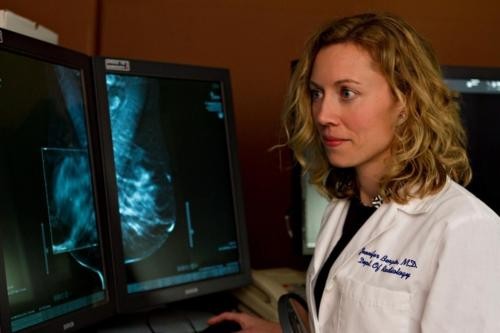 Published today in Radiology, the study led by Diana Miglioretti found that radiologists who interpret traditional mammograms, which are two-dimensional, required little start up time for transitioning to reading digital breast tomosynthesis (DBT), or 3D mammography, with improved screening accuracy.

Researchers found radiologists recalled patients for additional testing at a lower rate on DBT than they did on 2D mammography, without sacrificing cancer detection. A patient may be recalled if there is a suspicious finding on the screening examination that requires follow-up imaging and possibly biopsy to determine if it is cancer. Three-dimensional views taken as part of a DBT screening help the radiologist confirm that some findings on 2D images are not cancer and so fewer patients have to be recalled. These improvements were seen regardless of the patient’s breast density.

“We found that patients with or without dense breasts benefit from lower recall rates with 3D mammography and there is no trade off with cancer detection,” said Miglioretti, dean’s professor of biostatistics in the UC Davis Department of Public Health Sciences. “In fact, we were surprised to find that improvements in recall rates were larger in women without dense breasts.”

The study included data from 104 radiologists from 53 facilities in five U.S. states, collected by the Breast Cancer Surveillance Consortium (BCSC) to evaluate whether radiologists experience a learning curve for 3D mammography interpretive performance. The study is the largest of its kind and represented a broad range of radiology centers and providers. It is novel because it tracked radiologists’ performance over time as they transitioned from digital mammography to DBT.

DBT takes multiple X-ray images of each breast from many angles which are then computer assembled into a three-dimensional image of the breast that the radiologist can scroll through. The U.S. Food and Drug Administration requires only eight hours of additional training for qualified radiologists to be able to interpret DBT studies. Researchers wondered if there was a learning curve associated with the interpretive performance of this new technology and if any improvements are sustained by radiologists over time.

“We found both breast imaging subspecialists and general radiologists improved their screening performance when they switched from 2D to 3D mammography,” said Miglioretti. “These improvements were sustained for at least two years after adoption of the new technology.”

Most women in the U.S. do not have their mammograms interpreted by a breast imaging subspecialist, nor do they have access to academic medical centers. The study evaluated radiologists with a mix of experience at both academic and nonacademic facilities. Both breast imaging subspecialists and general radiologists improved their interpretive performance quickly after adopting DBT, with lower recall rates and similar cancer detection rates as for digital mammography.

“Women who want to reduce their chances of being recalled for additional testing may want to ask for digital breast tomosynthesis at their next screening exam,” said Miglioretti.