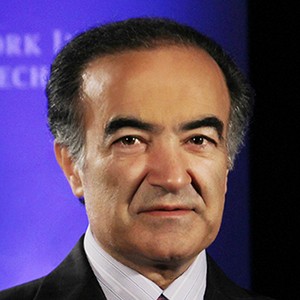 Newswise — Rahmat Shoureshi, Ph.D., will commence his role as interim president of New York Institute of Technology (NYIT) on January 21, 2017. In December 2016, NYIT Board of Trustees Chair Kevin Silva announced the appointment of Shoureshi, who will serve in the role until a permanent successor for Edward Guiliano, Ph.D., president from 2000 to 2017, is named. Shoureshi joined NYIT in 2011 as provost and vice president of academic affairs.

“The Board and I are grateful for Dr. Shoureshi’s commitment to NYIT’s mission and global community in assuming this new role,” says Silva. “We are confident his leadership, institutional knowledge, and professionalism will serve NYIT well during this transitional period. We also offer our sincere appreciation to Dr. Guiliano for his dedicated service for the past 17 years as president. Meanwhile, the national search for the next NYIT president is well underway and following best practices.”

Shoureshi’s appointment coincides with the beginning of the spring semester. His near-term priorities will include establishing several means of direct communication and engagement with students, faculty, and staff; working with enrollment and student affairs departments to boost yield and retention; coordinating with the Board of Trustees, deans, and the Office of Development to increase fundraising opportunities; ensuring that NYIT continues to attract world-class faculty; and overseeing the expansion of partnerships in the U.S. and abroad.

“I am very excited to carry on NYIT’s legacy of empowering students around the world through higher education and integrating technology to develop advanced learning environments,” said Shoureshi. “I remain deeply committed to our students, alumni, faculty, staff, donors, trustees, and other members of our diverse community. Together, we will ensure that our university further advances its reputation and dedication to working with partners in academia, government, and industry to solve pressing global issues.”

He added, “I also would like to thank Dr. Guiliano for his 42 years of teaching, scholarship, service, and contributions to NYIT, including 17 years as its president.”

Since joining NYIT in 2011, Shoureshi has overseen the development of academic programs, including Ph.D. degrees, interdisciplinary centers, and a newly formed School of Interdisciplinary Studies and Education; added significant faculty and highly skilled administrators; supported internal and external funding for research, which is at an all-time high; and developed new initiatives for teaching and learning with technology. Through his strategic plans, Shoureshi has transformed and expanded NYIT’s global campuses by offering high-quality and diverse degree programs and enabling them to be financially sustainable. In addition, he has initiated partnerships and dual-degree programs with universities in strategic regions around the globe, and overseen the development of collaborations with business and industry through educational and executive programs, technology transfer and commercialization, resource development, and other outreach activities.

As NYIT provost and vice president of academic affairs, Shoureshi is responsible for shaping academic priorities and programs; fiscal management and revenue diversification; resource development; attracting and supporting outstanding faculty and academic leadership; providing global education for students; introducing new degree programs; and expanding scholarship and research initiatives, especially in cross-disciplinary areas, over a global network of campuses in the U.S., Canada, China, and Abu Dhabi. Through primarily his efforts, NYIT now has a footprint in 12 countries. Prior to joining NYIT, Shoureshi served as dean of the School of Engineering and Computer Sciences at the University of Denver. In addition, he has taught and conducted research at Purdue University, served as a distinguished and endowed chair professor of engineering at the Colorado School of Mines, and was founding director of National Science Foundation industry/university cooperative research centers in the areas of power engineering and intelligent biomedical devices and musculoskeletal systems, as well as an industry-supported center on automation, robotics, and distributed intelligence. His pioneering effort resulted in the development and expansion of biotechnology and nanotechnology industries and educational programs in Colorado.

Shoureshi has been an active researcher with funding from government agencies and industry. His research efforts have resulted in more than 250 technical publications and several patents. He is an expert in automation, control systems design, and artificial intelligence with applications in robotics, biomedical engineering, energy/power engineering, structural engineering, and automotive engineering. Shoureshi earned his Ph.D. and M.S. degrees in mechanical engineering from Massachusetts Institute of Technology (MIT) and completed a program in marketing and industrial dynamics at the MIT Sloan School of Management.