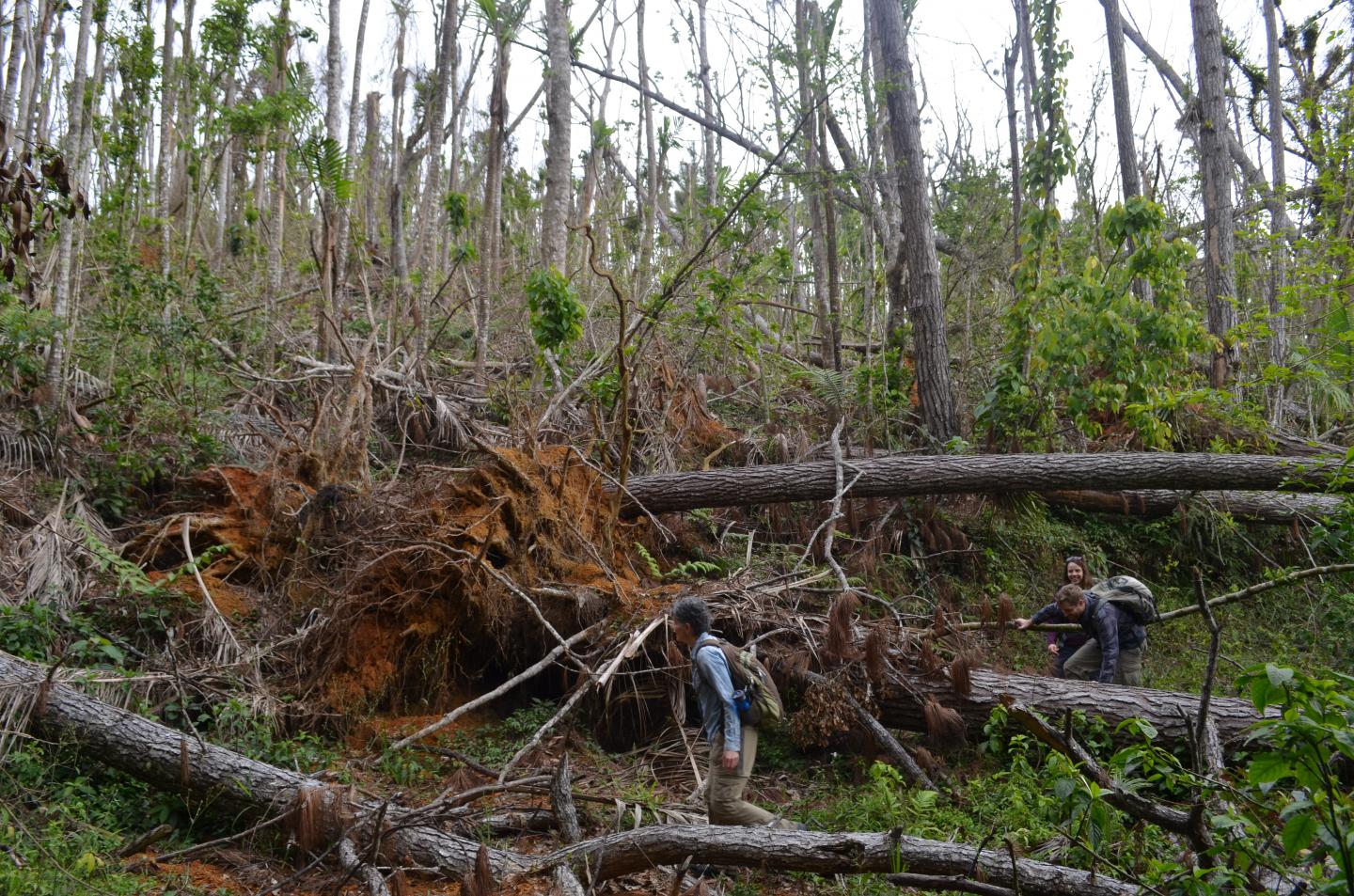 Researchers survey damage to a forest plot following hurricanes Irma and Maria. Uprooting of trees in many cases may have had more to do more with rain than wind. 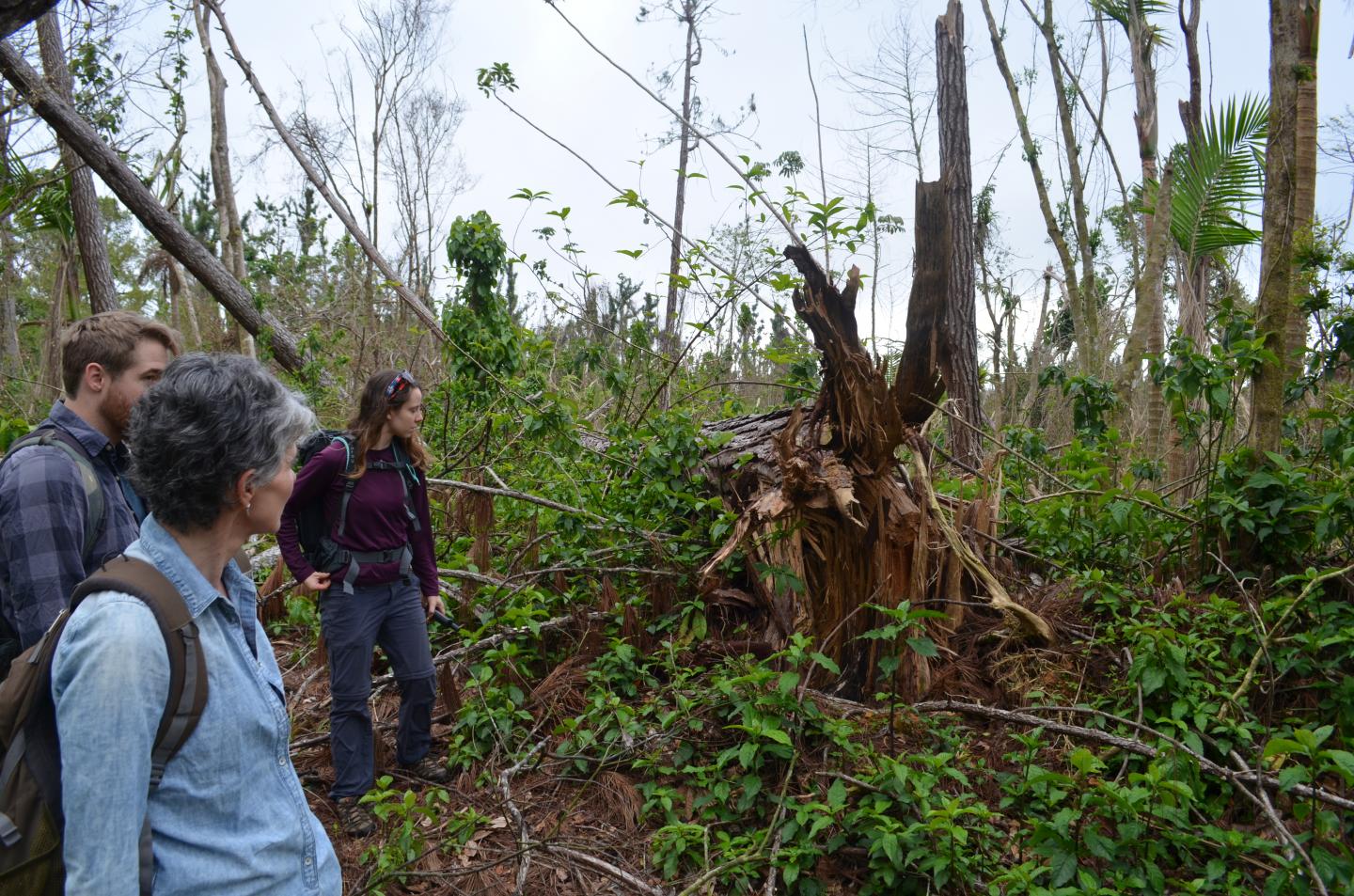 Many trees snapped above ground, possibly also due in part to rain. Study coauthor Maria Uriarte is in foreground, lead author Jazlynn Hall at far rear. 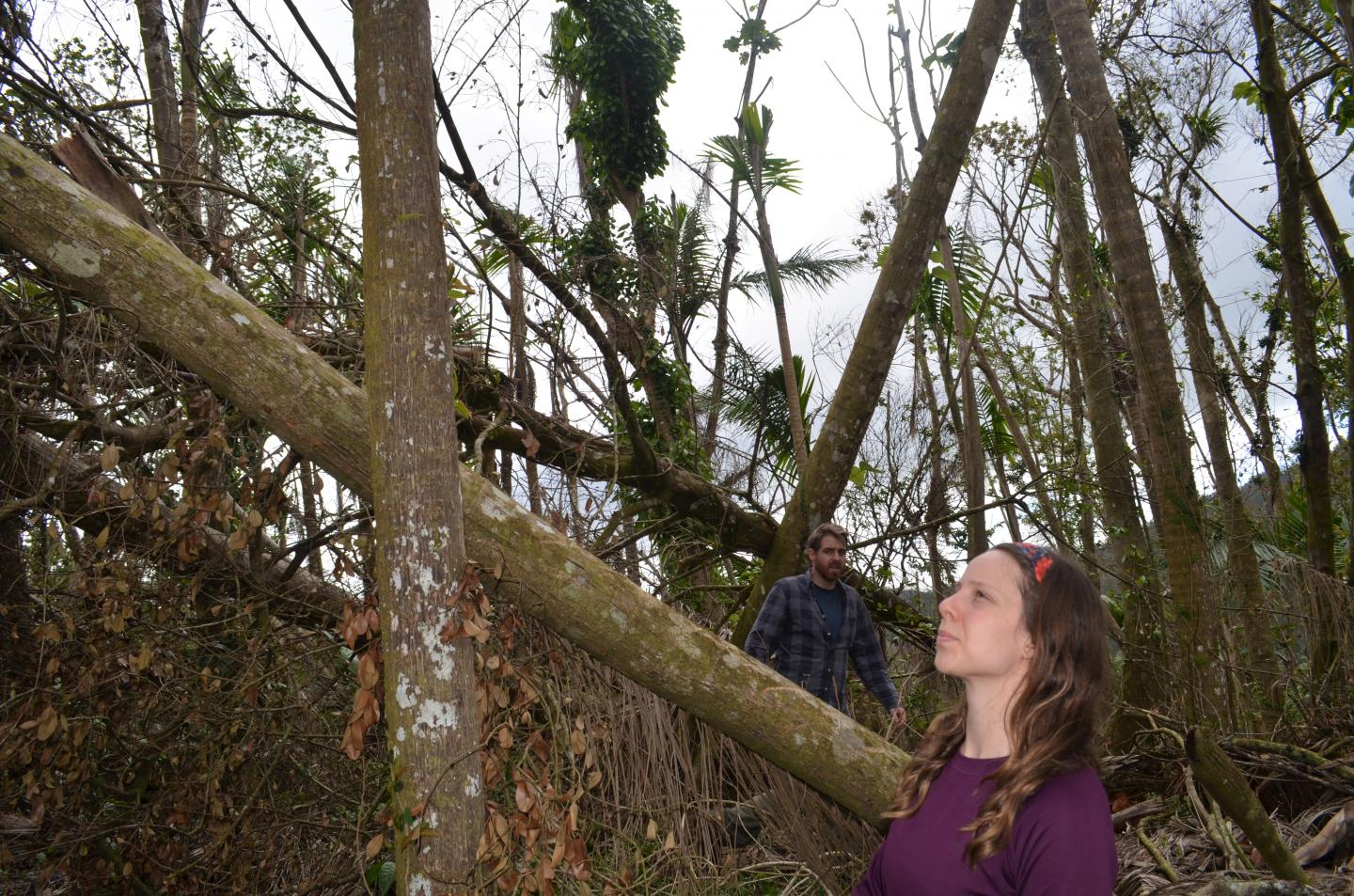 Newswise — A new study says that hurricanes Irma and Maria combined in 2017 to knock down a quarter of the biomass contained in Puerto Rico's trees -- and that massive rainfall, more than wind, was a previously unsuspected key factor. The surprising finding suggests that future hurricanes stoked by warming climate may be even more destructive to forests than scientists have already projected. The study appears this week in the journal Scientific Reports.

"Up to now, the focus on damage to forests has been on catastrophic wind speeds. Here, the data show that rain tends to be the greatest risk factor," said Jazlynn Hall, a Columbia University PhD. student who led the study. Her team identified several ways in which extreme rain might topple trees, but they do not completely understand the phenomenon yet, she said. She said that adding in climate-driven extreme rainfall to the various dangers threatening tropical and subtropical forests suggests that they may store less carbon in the future than previously thought.

When Irma arrived off Puerto Rico on Sept. 6, 2017, it was then the most powerful Atlantic hurricane ever recorded. (Dorian, two years later, surpassed it.) But the main storm passed well off the coast; it dumped a foot of rain, but spared the island the heaviest winds. Forests suffered little damage. Then, two weeks later, on Sept, 20, Maria hit directly, with sustained winds of up to 130 miles per hour, and an astonishing 5 feet of rain over 48 hours in some areas.

Extrapolating from a combination of satellite imagery and on-the-ground surveys made a year before the hurricanes, and repeated shortly after, the researchers say that in the wake of Maria, some 10.4 billion tons of Puerto Rico's tree biomass went down, with trunks snapped off, uprooted or stripped of leaves and branches -- 23 percent of the island's pre-hurricane forest. But the damage was not uniform, and the researchers sorted through various risk factors that might account for differences.

Conventional wisdom has it that big trees high up on slopes directly exposed to high winds should suffer the most in storms. Indeed, the researchers did find that canopy height was an overarching factor; they confirmed earlier research showing that the island's biggest trees were prime victims. After that, conventional wisdom dissolved. Drilling down past tree height, the scientists found that the next most important factors were the amount of rain a specific locality got, plus the maximum local sustained wind speeds. Underlying those: the amount of antecedent rain from Irma, plus the amount of water that could be stored in the first five feet or so of soil from both storms. Adding it all up, the researchers concluded that rain, and its resulting storage in soil, dominated in determining which locales suffered the worst damage. Slope, elevation, topographic protection from wind and orientation toward the wind turned out to be the weakest factors.

"It's surprising, in the sense that when you think about hurricane damage to forests, you think about wind," said Hall's advisor and paper coauthor Maria Uriarte, a professor at Columbia's Earth Institute. "We're very aware of what flooding does to human infrastructure, but not so much to natural ecosystems." Uriarte led a series of prior studies on the storms, including one last year suggesting that forests in the paths of increasingly powerful and frequent hurricanes may eventually go into permanent decline.

The researchers say extreme rain potentially could affect trees in multiple ways. For one, in relatively flat areas where soils are porous and have a high capacity to store water for extended periods, Irma probably pre-loaded the dirt with liquid. When Maria came along, the ground around tree root zones became waterlogged. This theoretically would weaken the soil and make it easier for wind to uproot trees.

In addition to uprooting, the researchers also found that many trees in high-damage areas instead suffered snapped trunks. This, Hall speculated, could happen because rain simultaneously increases the weight of the soil and a tree's canopy, exerting increased strain on the trunk in the face of high winds. A heavier canopy could also contribute to uprooting by simply making it easier for the tree to tip over in saturated soil, she said. Counterintuitively, trees growing on slopes might in many cases resist damage better, because soils there might drain more quickly than those in low-lying areas that are protected from wind, but which collect more rainfall.

"The protective role of topography may be lessened in storms of Hurricane Maria's magnitude, which may foreshadow similar effects in future intense storms," says the paper. "Our study supports the idea that compounded disturbances can interact in ways that cannot be predicted."

Hurricanes derive their strength from heated air, and previous studies have projected that, due to warming climate, wind speeds of North Atlantic hurricanes may increase by 6 to 15 percent by 2100. Perhaps more salient in light of the new study: Warmer air also pulls in more moisture, and current models project that rainfall will increase even more drastically -- 20-plus percent. Added to that, hurricanes may stall over land for increased times, meaning that rainfall will not be more intense, but last longer. This was what caused 2017's Hurricane Harvey to devastate southeast Texas with the wettest recorded tropical cyclone ever to hit the United States.

A study last year by other researchers says that things may be heading this way already. It estimates that trends in sea-surface temperatures over the last 60 years have made the probability of Hurricane Maria-scale precipitation five times more likely. In addition, intervals between high-rain storms like Irma and Maria have already decreased by 50 percent, hiking up the possibility of the sequence that took place in 2017.

Tropical forests are now absorbing a third less carbon from the air than they did in the 1990s, according to a study out last week. The main reasons right now are burning and logging of trees, higher temperatures and droughts. But if the new study holds up, in some places it may not be the fire next time, but water.

Caption: Researchers survey damage to a forest plot following hurricanes Irma and Maria. Uprooting of trees in many cases may have had more to do more with rain than wind.