Rapid Repair of Severely Damaged Concrete Columns After an Earthquake 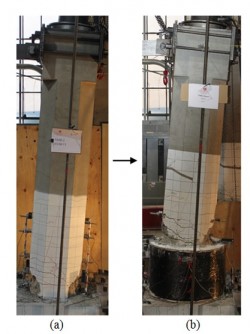 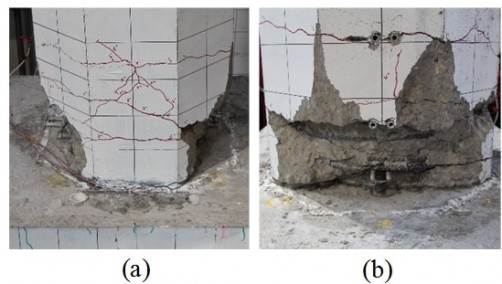 Figure 1 - Concrete column area of damage from simulated earthquake loads: (a) front; (b) side. 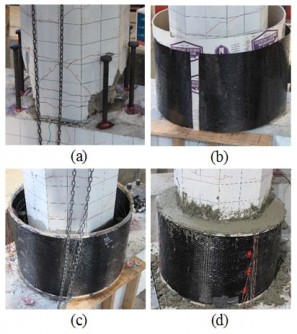 Newswise — Repair of damaged bridge columns following an earthquake is a good alternative to replacement; benefits include cost savings, reduction in construction time, and decreased interruption of emergency services. The objective of bridge repair is to rehabilitate damaged columns to a performance level similar to the original performance by restoring their lateral load and displacement capacity. In the design of bridges for earthquakes, damage is typically directed to bridge columns, thus protecting the pier caps and footings; hence, the post-seismic repair is focused on columns. Repair techniques for damaged columns include externally bonded carbon fiber-reinforced polymer (CFRP) jackets, steel jackets and reinforced concrete jackets. Until recently it has been assumed that when longitudinal bars within the column buckle or fracture the column should be replaced.

The repair method has been implemented on four severely damaged precast concrete columns connected using GSS connectors. The specimens were column-to-footing and column-to-pier cap joints, and had undergone quasi-static cyclic loading, simulating earthquakes reaching a severe damage state before being repaired. Damage was concentrated at the column ends and included concrete crushing, rebar fracture and rebar pullout from the GSS, thus significantly compromising lateral load and displacement capacity, as shown in Figure 1.

The repair technique uses materials that are easy to install including epoxy anchored headed steel bars, CFRP sheets and either nonshrink or expansive concrete. The first step in the repair procedure was to create a prefabricated CFRP shell, as shown in Figure 2. While the CFRP shell was curing, the holes for the headed steel bars were drilled into the footing or pier cap and the headed steel bars were epoxy anchored into place around the column. After the CFRP shell had cured it was split in half and placed around the column to simulate field conditions; three additional CFRP layers were applied to complete construction of the CFRP shell, which also acted as stay-in-place formwork. Once the CFRP shell had fully cured, either nonshrink or expansive concrete was cast inside the shell.

The strength and displacement capacity of the damaged bridge columns was restored by achieving approximately the same displacement and lateral load as the original specimens. The successful relocation of damage is shown in Figure 3. The result is a cost effective repair which could be installed within a few days. The research was funded by the Utah, New York State and Texas Departments of Transportation and the Mountain Plains Consortium.

According to Dr. Chris Pantelides, professor of civil and environmental engineering at the University of Utah and principal investigator of the research, “although the repair was developed for precast concrete columns it could be extended to cast-in-place columns; it has the potential to be used in the retrofit of columns before an earthquake as well as the repair of columns after an earthquake.” Based on the overall performance, this is a viable repair technique for severely damaged columns in regions with strong earthquakes. Even though initial column damage was severe, the method is robust and applicable to columns with varying damage states including buckled or fractured longitudinal steel bars. The repair technique is rapid and satisfies the requirements of accelerated bridge construction.

The research can be found in a paper titled “Seismic Repair of Severely Damaged Precast Reinforced Concrete Bridge Columns Connected with Grouted Splice Sleeves,” accepted and soon to be published by ACI Structural Journal.

Always Advancing – The American Concrete Institute is a leading authority and resource worldwide for the development and distribution of consensus-based standards and technical resources, educational programs and certifications for individuals and organizations involved in concrete design, construction and materials, who share a commitment to pursuing the best use of concrete. ACI’s inclusive, individual member-driven structure and valuable, cost-effective benefits result in an essential organization that invites partnerships and welcomes all concrete professionals who wish to be a part of a respected, connected social group that provides an opportunity for professional growth, networking and enjoyment. For additional information, visit www.concrete.org. 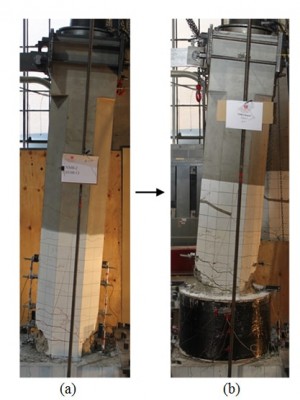 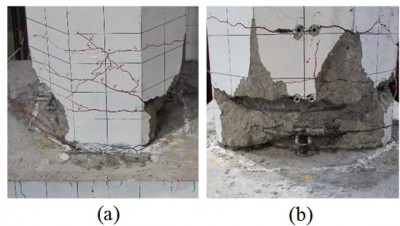 Caption: Figure 1 - Concrete column area of damage from simulated earthquake loads: (a) front; (b) side. 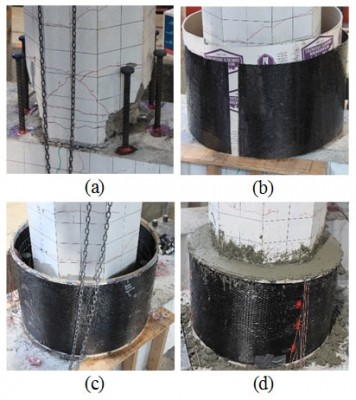