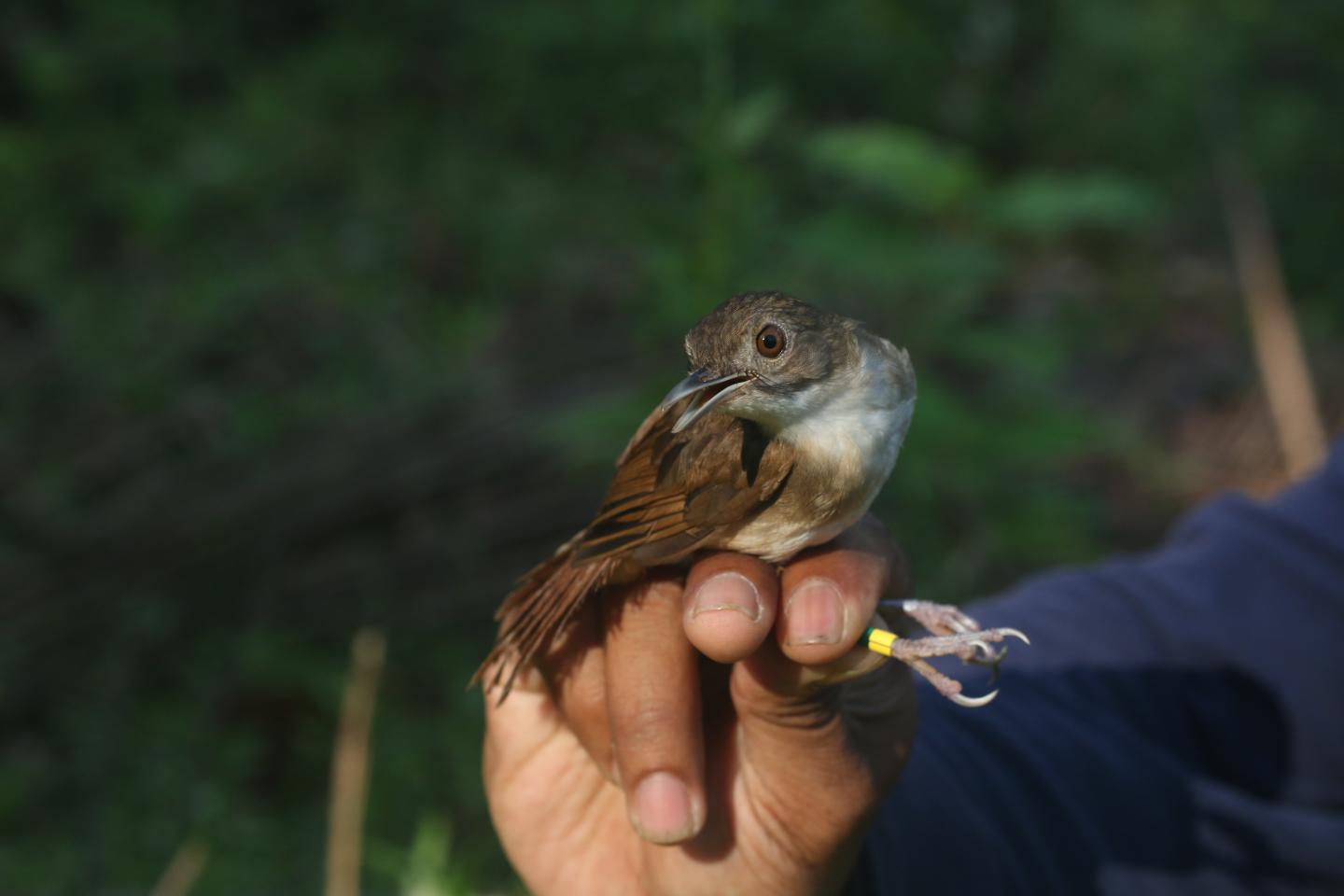 A Sulawesi babbler from the island of Wawoni. 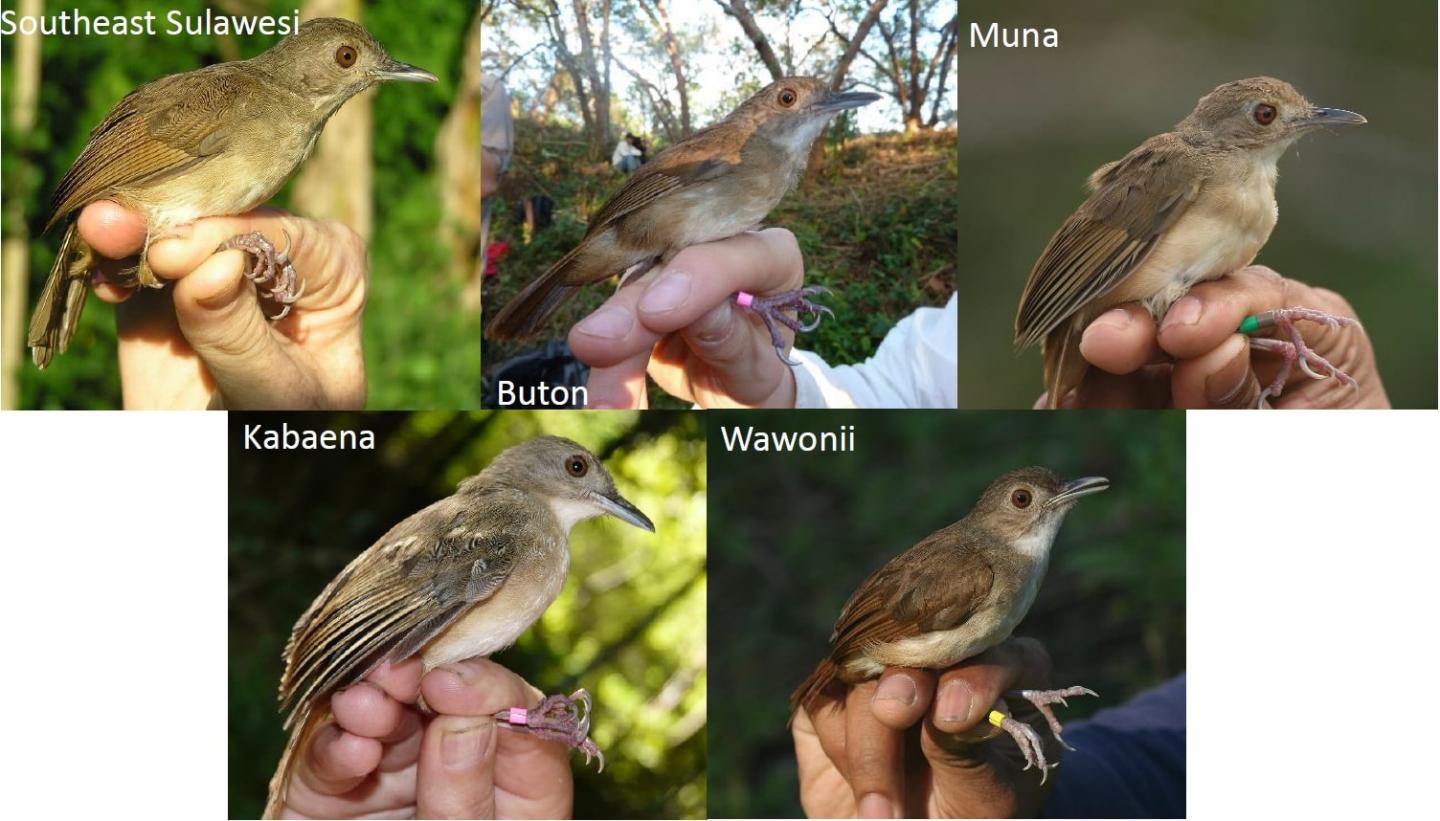 The different subspecies of Sulawesi babblers resident on each island, They may initially look similar but DNA analyses and song recordings confirm they are rapidly diversifying.

Newswise — New findings from zoologists working with birds in Southeast Asia are shining fresh light on the connections between animal behaviour, geology, and evolution - underlining that species can diversify surprisingly quickly under certain conditions.

The zoologists, from Trinity College Dublin's School of Natural Sciences, sequenced DNA and took measurements and song recordings from Sulawesi Babblers (Pellorneum celebense), shy birds that live in the undergrowth on Indonesian islands.

Although these islands were connected by land bridges just tens of thousands of years ago, and although the babblers look so similar that they are currently all considered a single subspecies, the new study shows that their DNA, body size and song have all changed in what is a very brief period of time from an evolutionary perspective.

The zoologists believe that this evolutionary divergence is likely facilitated by the babblers' understorey lifestyle, which limits the birds' movements even though they could easily fly between the islands if they chose to.

In the short time these islands have been isolated, the babbler subspecies have evolved to vary genetically from each other by as much as 1/3 as they do from more distantly related bird species that separated millions of years ago.

Fionn Ó Marcaigh, first author on the paper and a PhD Candidate in Trinity's School of Natural Sciences, said:

"Everyone has heard of Darwin's finches evolving completely different bill shapes on the Galápagos islands. The Galápagos are isolated out in the Pacific, so the birds there have had millions of years to evolve separately. But sometimes evolution can occur on much smaller scales of time and space and can be harder to detect just by looking at the animals in question.

"Unlike the Galápagos, the islands we looked at are just 20 km or less from the mainland. The more we study biodiversity, the more we realise is out there, as species and islands that have never been examined closely can turn out to be full of surprises.

"And a lot of it is under threat: in our study, the islands with the most distinct populations were those made of a particular rock type. This ultramafic rock is full of minerals like nickel, which get into the soil and change which plants can grow, to which the birds have to adapt. But that same nickel is being sought by mining companies so time is running out for the islands' biodiversity before we've even captured a full picture of it or understood how it's evolved."

The research, completed with the support of the Irish Research Council and collaborators in Universitas Halu Oleo, has just been published in Zoologischer Anzeiger: A Journal of Comparative Zoology.

Caption: A Sulawesi babbler from the island of Wawoni.

Caption: The different subspecies of Sulawesi babblers resident on each island, They may initially look similar but DNA analyses and song recordings confirm they are rapidly diversifying.