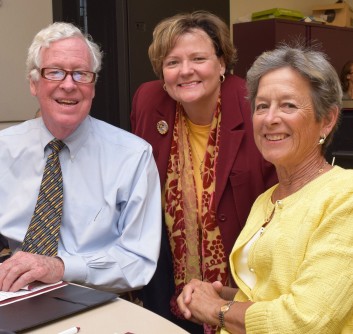 Newswise — SALISBURY, MD---A Salisbury University program to help create jobs throughout the mid-Atlantic will continue another five years, thanks to a new $1 million gift from the Philip E. and Carole R. Ratcliffe Foundation of Baltimore.

The Ratcliffe Shore Hatchery entrepreneurship competition in SU’s Franklin P. Perdue School of Business, established with the foundation’s initial $1 million contribution in 2013, will continue through at least 2024 under the new agreement.

“The Ratcliffe Foundation was attracted to SU because of our long history of success with our student entrepreneurship programs, which date to our first Richard A. Bernstein Achievement Award for Excellence in 1987,” said Dr. Christy Weer, dean of the Perdue School. “With the foundation’s support, we have been able to expand funding and mentoring opportunities, long provided for students, to entrepreneurs throughout the region.”

“Because of the Ratcliffe Foundation’s generosity, SU’s reputation as a regional hub for entrepreneurs has ascended,” added William Burke, SU executive director for economic development. “Success begets success. With the help of the Ratcliffe Shore Hatchery, SU has quadrupled sponsorships and awards for its student business competitions, twice attracted national auditions for ABC-TV’s Shark Tank and announced a privately funded entrepreneurship center expected to open in downtown Salisbury in 2020.”

Through the Ratcliffe Shore Hatchery, SU distributes $200,000 annually to business startups with a goal of having them open within six months and potentially employing three or more within a year.

Selected applicants vie for that funding via “Gull Cage” elevator pitch sessions to the program’s board of directors, similar to Shark Tank. Winners receive not only money, but mentoring from board members who head some of the region’s most successful businesses, including Perdue Farms, Rommel Holdings, South Moon Under, Pohanka Automotive Group, Sherwood of Salisbury and more.

Those not selected for funding also receive the benefit of mentorship, along with exposure to those board members and others via a semi-annual public exhibition taking place in connection with the competitions.

Since 2013, SU has awarded $800,000 to nearly 40 business startups in Maryland and Delaware through the program. From high school and college students to seasoned business veterans, the winners have been as diverse as their products — which have included everything from ice cream and European stroopwafel cookies, to a social cooking platform and online boat slip rentals, to kitchen tools and high-tech exoskeleton suits.

In addition to the Shore Hatchery, the Ratcliffe Foundation recently funded a $20,000 scholarship for Anne Arundel Community College students transferring to SU who demonstrate academic achievement and a commitment to entrepreneurship.

“We are incredibly excited to continue our support to the Shore Hatchery,” said Brian Ellis, director of the Ratcliffe Foundation. “Over the last five years we have seen many of the participants pitch and then watch their companies grow, with great achievement. Our support to the Shore Hatchery is amplified greatly through the exceptional program facilitated by Salisbury University and their hard work. We look forward to what the next five years has to offer and the creative innovations we will see.”

For more information call 410-546-4325 or visit the Ratcliffe Shore Hatchery website at http://shorehatchery.salisbury.edu.