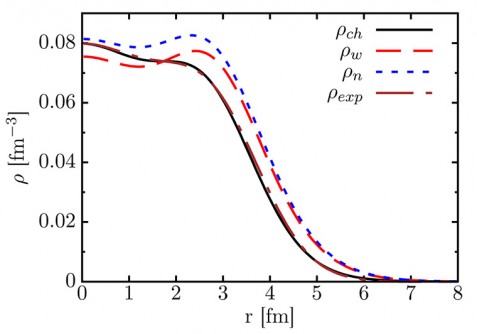 Newswise — For more than a decade, a cross-disciplinary team of chemists and physicists from Washington University in St. Louis has been chasing the atomic nucleus. With progressive studies, they moved up the element chain, to Calcium-48, an extremely rare, solid commodity that has more neutrons than protons and, as such, carries a hefty price tag of $100,000 per gram. And it is a quirky material, this particular study of  it taking Robert Charity and Lee Sobotka — research professor in chemistry and professor in both chemistry and physics in Arts & Sciences — from Duke’s Triangle Universities Nuclear Laboratory to the Department of Energy’s Los Alamos (N.M.) National Laboratory.

“If you leave it on a table, it turns to powder,” co-author Charity said. “Calcium oxidizes very quickly in air. It was a worry.”

Ultimately, three grams of Ca-48 helped to produce a double-edged finding for Charity and co-author Willem Dickhoff, professor in physics: Their team discovered both a framework to predict where neutrons will inhabit a nucleus and a way to predict the skin thickness of a nucleus.

To convert that into centimeters, it would measure  2.49×10-14 cm… but the key finding here is: The skin is thicker and more neutron-rich than previously believed.

“That links us to astrophysics and, in particular, neutron-star physics,” Dickhoff said of the research results. “The Los Alamos experiment was critical for the analysis we pursued: In the end, because it has this additional set of neutrons, it gets us to information which helps us to further clarify the physics of neutron stars — where there are many more neutrons relative to protons. And it gives us the opportunity to predict where the neutrons are in Ca-48. That is the critical information, which leads to the prediction of the neutron skin.”

For Charity, Dickhoff and co-authors Hossein Mahzoon, PhD ’15 and lecturer in physics at Truman State University, along with Mack Atkinson, a PhD candidate in physics, the chase continues. They watch with interest as Ca-48 is scheduled to undergo the cleanest skin-thickness test available, via the electron accelerator at the Thomas Jefferson National Accelerator Facility in Newport News, Virginia. Moreover, they proceed to move up the element chain of neutron-rich nuclei to what Charity called the “famous nucleus” of Lead-208, a study spearheaded by Michael Keim, a senior in physics.

“It will give us an experimental handle on whether our analysis is really predictive,” Dickhoff said. “We think we have a good argument why we think it has a thick skin. There is a large group of people… who predict a smaller skin. This is directly relevant for the understanding of the size of neutron stars. It is not yet crystal clear how big a neutron star is — it’s radius.”

How they made their analysis and reached this predictive framework is part of their decade-long pursuit as well. Their chemistry-physics group subscribes to “dispersion relations,” which Dickhoff explained simply, quoting Sobotka: “It’s what tells you not to laugh before you are tickled. That means causality is properly taken into account.” In short, they analyze all energies simultaneously rather than focusing on one single energy.

Since first publishing together in 2006, they have used the dispersive optical model (DOM) developed a quarter-century ago by a nuclear theorist from Belgium, Claude Mahaux. They expanded upon it — across energy domains and isotopes — so they could attempt to predict where the nuclear particles are.

“We had to make the technical step to include the sensitivities of particles,” Dickhoff said. He used his hands to illustrate the center and then the rest of a nucleus: “If they are here, they were also influenced by everywhere else. Which we call ‘nonlocality.’ Without that, you cannot make these predictions.”

Heavy, neutron-rich elements behave differently. So this team keeps ascending the heavyweight classes: Ca-40, Ca-48, Lead-208… . “To say: How far can you go out along an isotope chain until losing neutrons?” Charity said. It gives them skin in the skin game.

“When you put extra neutrons in, it doesn’t like that, right?” Charity said of the atomic nucleus.  “It has to figure out how to accommodate these extra neutrons. It can put them evenly throughout the nucleus. Or it could put them on the surface. So the question is: Is this force stronger in the low density region of the nucleus, or weaker?”

Dickhoff added: “We know where the protons are, that is well established experimentally. But you can’t do that easily with neutrons. I simply want to know what a nucleon, a proton or a neutron is doing. How is it spending its time? Nucleons are more interactive — they do other things than sit quietly in their orbits. That’s what this method can sort of tell us.”

Their nonlocal DOM framework — a decade-plus in the making — uses computer modeling and computations as well as the lab experimentation. It allows them to “make a prediction that is well founded and taken seriously,” Dickhoff said. “Next, we will have a measurement for Lead-208.”