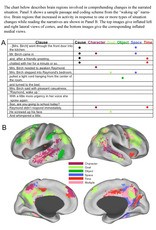 A color-coded chart describes changes in brain activation during the reading of a brief narrative.

Newswise — A new brain-imaging study is shedding light on what it means to "get lost" in a good book — suggesting that readers create vivid mental simulations of the sounds, sights, tastes and movements described in a textual narrative while simultaneously activating brain regions used to process similar experiences in real life.

"Psychologists and neuroscientists are increasingly coming to the conclusion that when we read a story and really understand it, we create a mental simulation of the events described by the story," says Jeffrey M. Zacks, study co-author and director of the Dynamic Cognition Laboratory at Washington University in St. Louis.

Click the brain scans above to view a color-coded chart describing changes in brain activation during the reading of a brief narrative.

The study, forthcoming in the journal Psychological Science, is one of a series in which Zacks and colleagues use functional magnetic resonance imaging (fMRI) to track real-time brain activity as study participants read and process individual words and short stories.

Nicole Speer, lead author of this study, says findings demonstrate that reading is by no means a passive exercise. Rather, readers mentally simulate each new situation encountered in a narrative. Details about actions and sensation are captured from the text and integrated with personal knowledge from past experiences. These data are then run through mental simulations using brain regions that closely mirror those involved when people perform, imagine, or observe similar real-world activities.

"These results suggest that readers use perceptual and motor representations in the process of comprehending narrated activity, and these representations are dynamically updated at points where relevant aspects of the situation are changing," says Speer, now a research associate with The Western Interstate Commission for Higher Education (WICHE) Mental Health Program in Boulder, Colo. "Readers understand a story by simulating the events in the story world and updating their simulation when features of that world change."

In addition to Zacks, an associate professor of psychology in Arts and Sciences and of radiology in the School of Medicine at WUSTL, other co-authors for this study are Jeremy R. Reynolds, assistant professor of psychology at the University of Denver in Denver, Colo.; and Khena M. Swallow, a post-doctoral associate in psychology at the University of Minnesota. Reynolds, Swallow and Speer all graduated from the psychology doctoral program at WUSTL in the last several years.

Reading, one of the most important skills human beings can acquire, has been difficult to study using fMRI because researchers seldom have access to expensive scanning equipment for long periods of time. Reading long passages of text also poses challenges because participants must remain very still for the scans to be effective. In an effort to minimize eye movements, participants are immobilized within the brain-scanning device and presented with text one-word-at-a-time on an adjacent computer screen.

Previous research has shown that when people read isolated words or phrases involving vivid visual or motor contents, brain activity in sensory and motor brain regions specifically related to those contents increased. But this result might not be typical of normal reading — in the previous studies there was no story to try to understand, and participants sometimes had to make an explicit judgment about each word or phrase. In this study, Speer and colleagues used fMRI to look for evidence of mental simulation during the reading of extended stories. Each participant read four stories of less than 1500 words excerpted from a simple, 1940s-era book about the daily activities of a young boy. Participants were shown text passages on a computer screen that displayed one word at a time; reading all four stories took most participants about 40 minutes.

The researchers had carefully coded the stories so that they knew when important features of the story were changing. The features had been chosen based on previous studies of narrative reading, and were known to be important for comprehension. The researchers hypothesized that some brain regions would increase at several different feature changes, but that other brain regions would be selectively activated by only one feature change. This is what was found.

For example, changes in the objects a character interacted with (e.g., "pulled a light cord") were associated with increases in a region in the frontal lobes known to be important for controlling grasping motions. Changes in characters' locations (e.g., "went through the front door into the kitchen") were associated with increases in regions in the temporal lobes that are selectively activate when people view pictures of spatial scenes.

Overall, the data supported the view that readers construct mental simulations of events when reading stories.

The Speer et al. paper extends results reported by this group previously in Psychological Science. In the previous study, the researchers asked readers to divide the stories into meaningful events after reading them in the MRI scanner. The researchers then asked which parts of the brain increased in activity at event boundaries. The mental simulation results reported here line up strikingly with those regions. This suggests that readers construct a mental simulation as they read, and then divide that simulation into meaningful events when important features change.