Linsey Marr is obsessed with flu transmission. By studying the way that particles in the air we breathe interact with our bodies, the professor in the Charles E. Via Jr. Department of Civil and Environmental Engineering hopes to find strategies that block flu transmission by interfering with droplet chemistry. 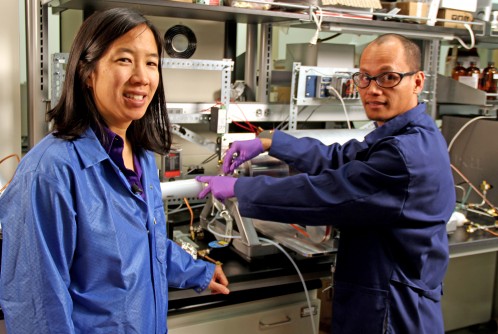 Newswise — Linsey Marr, a professor in the Charles E. Via Jr. Department of Civil and Environmental Engineering at Virginia Tech, is obsessed with flu transmission.

This time of year, she’s not alone. Hand sanitizers and cough drops abound, and banners outside drugstores and doctors’ offices proclaim, “Get your flu shot.”

But this year, that vaccine will only reduce your risk of ending up in the doctor’s office with the flu by about 23 percent.

The vaccine was developed nearly a year ago in February, 2014, and it’s not an ideal match for H3N2, the strain of the virus prevalent this season.

That mismatch — along with H3N2’s reputation for causing higher hospitalization and mortality rates — led the Centers for Disease Control and Prevention to predict a severe flu season this year.

That prediction has been borne out, with more flu-related doctors’ office visits this year than last year. In Virginia, flu activity remains high after peaking in late December, according to the state health department.

As recovering flu victims struggle back to work and school, and new cases keep cropping up, the question on everyone’s mind is: What can people do about it?

That’s what Marr is figuring out. She’s interested in the way that particles in the air we breathe interact with our bodies, and the influenza virus is a prime example.

Many cases of the flu are spread by airborne transmission: infected people cough or sneeze, sending thousands of tiny droplets containing mucus, saliva, and viral particles soaring through the air.

The bigger droplets settle on doorknobs, counters and keyboards, but the smallest ones hang in the air, an invisible infectious mist just waiting to be sucked into the lungs of the next victim.

Marr wondered why those droplets seemed to cause more infections in the winter. She focused on one major environmental factor: humidity. Indoor humidity is lower in the winter, when central heating dries out the air.

As the air gets drier, it sucks moisture out of those mucus droplets. As the droplets shrivel and crystallize, the reduction in water increases the concentration of salts and proteins and changes the acidity.

Marr found that between 50 percent and 98 percent humidity, the virus doesn’t survive well — the droplets dry out just enough to be inhospitable.

But at very low humidity — like you’d find indoors in the winter — droplets can dry out completely, preserving the virus like microscopic beef jerky.

Marr obtained those results using relatively large, millimeter-sized droplets, and now she and her colleagues are working to confirm the behavior in smaller droplets — the kind that remain suspended in the air and are most likely to make people sick.

They suspend flu-containing aerosols in a rotating drum at a set humidity, and then check to see if the virus is still infectious.

But the dream, Marr said, is to look at the virus itself as the droplet changes around it: that will allow her to see precisely what’s happening to the virus to deactivate it.

An influenza viral particle is only about 100 nanometers in diameter; 1,000 of them stacked together reach the thickness of a sheet of paper. Looking at things that tiny requires high-powered microscopes that use electrons, instead of light, to reveal structure.

Getting that high-resolution data, Marr said, is critical to developing interventions and policy recommendations on preventing flu transmission.

This research could lead to strategies that block flu transmission by interfering with droplet chemistry. That approach wouldn’t depend on correctly guessing, months in advance, that year’s dominant strain of flu.

Marr plans to extend her research on droplet-based disease transmission to another highly infectious virus: Ebola.

Unlike the flu, Ebola is mostly spread by contact, but under “very special circumstances,” Marr said — like spray from infected sewage — droplets flying through the air could spread infection.

Because Ebola’s mortality rate is so high, even a low risk of airborne transmission warrants study.

Marr has been recognized by the National Institutes of Health as an especially innovative and creative investigator; her research combines techniques from areas as different as cell biology and nanoscience.

Marr’s research is supported in part by the Institute for Critical Technology and Applied Science, which provides seed funding for interdisciplinary projects.

The most pressing scientific questions, Marr said, require that kind of approach.

“A lot of the discipline-based questions have been answered,” she said, and to solve the big problems facing society today, “you need to draw people from different disciplines.” And, she added, “It’s more interesting, too.”