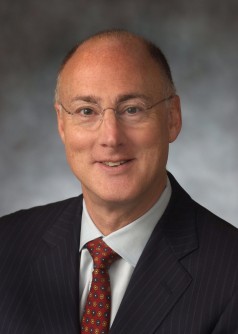 Credit: The Lewis Katz School of Medicine at Temple University

Newswise — (Philadelphia, PA) - Patients with mild heart failure stand to benefit from a new drug that can halt the progression of their disease and reduce their risk of cardiovascular-related death. But the drug -- a tablet that combines the agents valsartan and sacubitril, sold under the trade name Entresto by drugmaker Novartis -- may be too good to be true, according to Arthur M. Feldman, MD, PhD, Executive Dean of the Lewis Katz School of Medicine at Temple University (LKSOM), Chief Academic Officer of the Temple University Health System, and Laura H. Carnell Professor of Medicine at LKSOM.

In an article published online December 7th in the Journal of the American Medical Association, Dr. Feldman and colleagues at Thomas Jefferson University and the University of Florida warn that valsartan/sacubitril could theoretically increase patients' risk of Alzheimer's disease and macular degeneration, a blinding condition affecting the retina of the eye. The article raises these concerns about the drug, which was approved by the U.S. Food and Drug Administration in July 2015.

"Basic science data has caused us to speculate that off-target effects of valsartan/sacubitril may cause an exacerbation of Alzheimer's disease and could also exacerbate the course of macular degeneration," Dr. Feldman explained.

Dr. Feldman went on to note that "doctors are prescribing these drugs without knowledge of these theoretical risks."

Valsartan/sacubitril works by inhibiting an enzyme known as neprilysin, which normally plays a critical role in breaking down a wide array of peptides in cells. Among those substances are the so-called natriuretic peptides, which function in regulating scarring and cell growth in the heart when neprilysin is blocked. Because of those activities, valsartan/sacubitril can delay the progression of heart failure in some patients.

Neprilysin, however, also normally degrades amyloid beta, a peptide that can accumulate in the brain, where it contributes to Alzheimer's disease, as well as in the eye, where it is implicated in macular degeneration. The balance between the production and clearance of amyloid beta is crucial to the pathogenesis of Alzheimer's disease and is suspected to influence the development of macular degeneration. In animal models, blocking neprilysin disturbs that balance and exacerbates the development of Alzheimer's pathology.

Valsartan/sacubitril was approved for heart failure via the FDA's fast-track program, in which drugs that promise to fulfill unmet medical needs undergo an accelerated review process, speeding the delivery of novel drugs to the clinic. In the studies that led to the drug's approval, no adverse events related to dementia were reported. However, according to Dr. Feldman and his colleagues, patients were followed for too short a period of time to confidently rule out potential adverse effects on cognitive function or vision, and specific tests were not performed to assess whether early changes in either Alzheimer-specific cognitive function or macular degeneration had occurred.

The FDA has required Novartis to conduct a thorough assessment of the cognitive risks associated with valsartan/sacubitril in a clinical trial in patients with heart failure and preserved ejection fraction. However, the data from that study will not be available until 2022.

"My hope is that physicians will be prudent with the use of this new drug," Dr. Feldman said. "The risks are theoretical, but every precaution should be taken to avoid them. The outcomes could be devastating for patients."