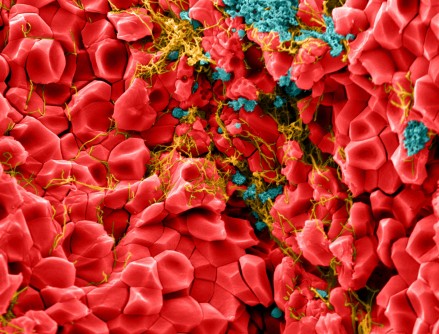 A previously unknown shape for red blood cells in contracted clots. The red blood cells can be compressed into many-sided, closely-packed polyhedral structures instead of their free-flowing bi-concave, disc shape.

Newswise — PHILADELPHIA - Red blood cells are the body’s true shape shifters, perhaps the most malleable of all cell types, transforming – among many other forms -- into compressed discs capable of going through capillaries with diameters smaller than the blood cell itself. While studying how blood clots contract John W. Weisel, Ph.D., professor of Cell and Developmental Biology at the Perelman School of Medicine, University of Pennsylvania, and colleagues, discovered a new geometry that red blood cells assume, when compressed during clot formation.

Although red blood cells were first visualized in the mid-17th century and studied extensively since then, this new study, published online ahead of print in the journal Blood, describes a previously unknown shape and potential new function for red blood cells. The Penn team found that red blood cells can be compressed into many-sided, closely-packed polyhedral structures – instead of their free-flowing bi-concave, disc shape.

What’s more, contrary to expectations, the aggregates of fibrin and platelets that make up highly contracted clots lie primarily on the clot exterior, with the red blood cells crowded within the clot interior, although the contents of clots are more homogeneous before contraction takes place.

Contracted clots may form an impermeable seal and help prevent vascular obstruction, but confer resistance to penetration by drugs that break down fibrin, the structural component of clots, a common treatment option for heart attacks and strokes.

“The first time we saw this, we thought: ‘This can’t be biological,’” recalls Weisel. The team first saw the polyhedron-shaped red blood cells when studying the clot-contraction process using a novel magnetic resonance technology, with co-authors from T2 Biosystems, along with co-author Douglas Cines, M.D., director of the Coagulation Laboratory and professor of Pathology and Laboratory Medicine at Penn. They observed a signal that indicated tightly packed red blood cells.

The Clot NetworkClots are a three-dimensional network of fibers, made up primarily of the blood protein fibrinogen, which is converted to fibrin during clotting, and platelets, which aggregate by binding to fibrin once they are activated. A blood clot needs to have the right degree of stiffness and plasticity to stem the flow of blood when tissue is damaged, yet be flexible enough that it does not block blood flow.

After a clot forms, the actin and myosin in platelets start the contraction process and cause the clot to shrink to about one-third of its original size. This is an important step to stem bleeding, to decrease obstruction in blood vessels, and to provide a matrix for migration of cells involved in wound healing. Red blood cells are caught up in the contraction process, especially in the venous system, and get pulled by the platelets towards the interior of the clot, as the Blood study indicates.

Little was known about the structure of contracted clots or the role of red blood cells in the contraction process. “We found that contracted blood clots develop a remarkable structure, with a meshwork of fibrin and platelet aggregates on the exterior of the clot and a close-packed, tessellated array of compressed polyhedral erythrocytes within,” says Weisel.

The team also saw the same morphology of compacted clots after initiating clotting with various activators and also with clots formed from human blood reconstituted with its cellular and plasma components and from mouse blood. Such close-packed arrays of polyhedral erythrocytes, or polyhedrocytes as the researchers dubbed them, were also observed in human arterial thrombi taken from patients who had heart attacks. This shape is likely taken on by the red blood cells when contracted or pushed together when the platelets compress a clot so as to decrease volume, surface energy, or bending energy, surmise the authors.

Cines notes that these findings might have clinical implications. Physicians need to inject thrombolytic agents such as tPA to rapidly break up thrombi, clots that obstruct blood flow, for example in coronary arteries to treat a heart attack, or in the arteries to the brain to treat a stroke. It is well known that with time thrombi develop resistance to being broken up, which is one reason why early intervention is so important. The nearly impermeable barrier formed by red blood cells within the contracted clots that was observed in the Blood study may help to explain why. Clot contraction could be a target of intervention to prevent the formation of the closely packed array of polyhedrocytes. Additional co-authors are Tatiana Lebedeva, Chandrasekaran Nagaswami, Rustem I. Litvinov, Vincent Hayes, and Lubica Rauova, all from Penn, and Walter Massefski and Thomas J. Lowery from T2 Biosystems, Lexington, MA.