Reflux Esophagitis Due to Immune Reaction, Not Acute Acid Burn 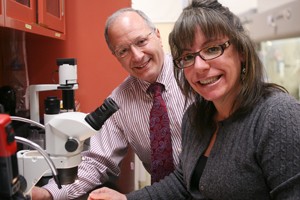 Research by Drs. Stuart Spechler and Rhonda Souza suggests that gastroesophageal reflux disease might actually be an immune-mediated injury rather than a direct result of acidic digestive juices burning the esophagus.

“Currently, we treat GERD by giving medications to prevent the stomach from making acid,” said Dr. Rhonda Souza, associate professor of internal medicine at UT Southwestern and lead author of the study appearing the November issue of Gastroenterology. “But if GERD is really an immune-mediated injury, maybe we should create medications that would prevent these cytokines from attracting inflammatory cells to the esophagus and starting the injury in the first place.”

In the study, researchers created GERD in rats by connecting the duodenum to the esophagus. This operation allows stomach acid and bile to enter the esophagus. Researchers were surprised to learn that esophagitis didn’t develop for a number of weeks after the operation.

“That doesn’t make sense if GERD is really the result of an acid burn, as we all were taught in medical school,” said Dr. Stuart Spechler, professor of internal medicine at UT Southwestern and senior author of the study. “Chemical injuries develop immediately. If you spill battery acid on your hand, you don’t have to wait a month to see the damage.”

About 40 percent of Americans suffer symptoms of GERD at some point, and 20 percent on a weekly basis, Dr. Souza said. Over the long term, GERD could eventually lead to esophageal cancer.

“In animal models of reflux esophagitis designed to mimic the human disease, researchers hadn’t looked at the early events in the development of esophageal injury,” Dr. Souza noted. “Most of those investigators have been interested in the long-term consequences of GERD, and we found virtually no published data about what happens later that induces gastroesophageal reflux.”

Dr. Souza, who is also a staff physician at the Dallas Veterans Affairs Medical Center and part of the Harold C. Simmons Comprehensive Cancer Center at UT Southwestern, and Dr. Spechler, chief of gastroenterology at the Dallas VA, said the method they used to produce GERD in rats is a reasonable representation of how GERD develops in humans – acidic digestive juices from the stomach surge into the esophagus.

Soon after the operation, they expected to see the death of surface cells of the esophagus, and they expected to see the injury progress later to the deeper layers. Instead, they found the opposite. Three days after the surgery, there was no damage to surface cells, but the researchers did find inflammatory cells in the deeper layers of the esophagus. Those inflammatory cells didn’t rise to the surface layer until three weeks after the initial acid exposure.

The next step for researchers is to conduct additional studies in humans.

The study was supported by the Dallas VA Medical Center and the National Institutes of Health.