Refusing Surgery for Esophageal Cancer May Cause Severe Consequences for Patients 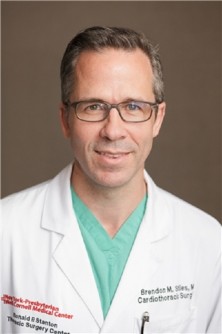 Newswise — FORT LAUDERDALE, FLORIDA (January 30, 2018) — Patients with esophageal cancer who refuse surgery when it is recommended are less likely to survive long term than similar groups of patients who undergo an operation, according to research presented today at the 54th Annual Meeting of The Society of Thoracic Surgeons.

“Although it may be tempting for patients to opt for nonsurgical treatment for cardiothoracic diseases in order to avoid the perceived pain and complications of surgery, this choice may come with a price,” said senior author Brendon M. Stiles, MD, of Weill Cornell Medicine in New York, NY. “In our study, we show that even if patients recommended for surgery elect to pursue other treatments, they do more poorly than if they had included surgery as part of their treatment.”

Dr. Stiles and colleagues from Weill Cornell Medicine queried the National Cancer Database for patients with esophageal cancer from 2004 to 2014. The researchers identified 18,549 patients, including 708 patients who were recommended for surgery but declined. Within this group, instead of surgery, 41% (292) of patients were treated with definitive chemoradiation, 36% (256) with sequential chemotherapy/radiation, 8.2% (58) with radiation and/or chemotherapy alone, and 14% (102) received no treatment. Propensity matching was performed to compare patients who refused surgery to those treated with preoperative therapy followed by surgery (525 in each group). Median survival was significantly better in the neoadjuvant group with surgery than in patients who refused an operation, 32 months vs. 22 months, respectively.

“The difference in survival between patients who had surgery and those who were offered but refused was striking,” said Dr. Stiles. “Even after we matched groups for other risk factors, the difference held up, with an absolute survival benefit of 12% at 5 years that favored patients who underwent surgery.”

Among the patients included in this study, older, non-white women were more likely to refuse surgery, as were patients with earlier stage disease (Stage I and II). Dr. Stiles said that the researchers expected more skepticism toward surgery from patients with advanced disease and a poor prognosis, but were particularly disheartened that patients with “surgically curable early stage disease would forgo potentially life-saving surgery.” Dr. Stiles stressed that all cancer patients must be adequately informed about the risks and benefits of the various treatment options and that all patients must have access to quality surgery.

“I often see patients with esophageal cancer back after receiving chemotherapy and radiation therapy and they ask if they now need surgery to remove their esophagus,” said Mark S. Allen, MD, general thoracic surgeon and Professor of Surgery at the Mayo Clinic in Rochester, MN, who was not directly involved with this research. “I intend to use the information presented in this paper when I explain to them that surgery will likely significantly increase their chance of cure, so yes, it is worth going through with the operation."

Esophagectomy is the main surgical treatment for esophageal cancer. During the operation, the surgeon removes all or part of the esophagus through an incision in the chest, abdomen, and sometimes the neck. The esophagus is then reconstructed using part of another organ, usually the stomach or large intestine. Patients are typically in the hospital for about 1 week. Esophagectomy is perhaps one of the toughest operations that patients go through, said Dr. Stiles, explaining that complications can occur in at least one-third of patients. Additionally, many patients experience lifelong changes in their eating habits.

Dr. Stiles said that after reviewing the data from the database, it was hard to know what factors may have affected the patients’ treatment decisions. However, the researchers suspect that much depended on the type of physician with whom the patients first met and the way the surgery was described to the patients during the shared decision-making process. As a result, Dr. Stiles recommended that in addition to other physicians, patients should discuss their treatment options with a general thoracic surgeon, allowing them to better understand the role of esophagectomy and to understand that in many instances their chances of beating cancer will likely increase with an operation.

“We have been very concerned by the increased rates of cancer patients opting for nonsurgical therapies despite the absence of long-term survival data,” said Dr. Stiles. “While all of the nonsurgical techniques seem easier and less invasive to patients in the short term, patients should understand the long-term implications. This is particularly true of early stage cancer, in which local control and correct staging with surgery is so critical.”

The researchers are confident that studies like this will help move some of the focus of shared decision-making away from short-term outcomes, which often favor nonsurgical treatment modalities, to a discussion of the larger picture and long-term survival.

“Surgery will continue to be a cornerstone of the multidisciplinary care of esophageal cancer,” said Dr. Stiles. “Patients should have surgical consultations and be informed of treatment options and long-term outcomes associated with each type of treatment. By optimizing surgical care, we can optimize survival of patients with esophageal cancer.”

The other authors of the study were M Rahouma, MK Kamel, A Nasar, BE Lee, SW Harrison, J Port, and NK Altorki.

54th Annual Meeting of The Society of Thoracic Surgeons