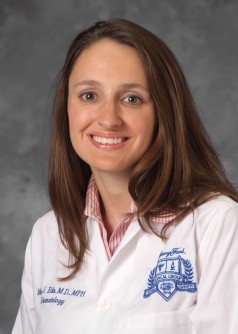 Newswise — DETROIT – The risk of dying from the most dangerous type of skin cancer is significantly reduced with regular doctor visits, according to a Henry Ford Hospital study.

This is believed to be the first study of its kind to link melanoma mortality with routine health care use.

Researchers also found substantial reductions in mortality in patients who underwent preventive screenings like a fasting blood test or colonoscopy.

The study is being presented Friday, May 9 at the Society of Investigative Dermatology’s annual meeting in New Mexico.

“This study is important because it’s not about having health insurance or having access to care. It’s about tapping into that care,” says Melody Eide, M.D., MPH, a Henry Ford Hospital dermatologist and the study’s lead author.

“We know that people are always going to have struggles in their lives. They’re going to have unreliable transportation, children that they’re caring for, copays that are too expensive to pay. What this study suggests is that these types of barriers may impact your prognosis for cancer if they impede your ability to make your medical care a priority.”

While all cancer deaths declined 1.5 percent annually from 2002-2011, the number of melanoma deaths increased 5 percent in the early to mid-1990s but have since leveled off, according to the National Institutes of Health.

However, disparities and poor outcomes exist in melanoma patients who are older, male and from ethnic and lower socioeconomic backgrounds. Researchers sought to examine whether these disparities, when coupled with patients who have insurance and access to care, could be predictors of melanoma mortality.

For the retrospective observational study, researchers reviewed melanoma cases of 251 Caucasian patients from 2001-2007, of which 158 were men. The patients all had health insurance and were eligible for care in a health maintenance organization during the study period. The patients’ average age was 60, the age at which patients are typically diagnosed with melanoma.

Surprisingly, researchers found that visiting a specialist prior to melanoma diagnosis may reduce their risk of dying by 90 percent.

“This suggests that these patients who do better may be more engaged in their care or have less outside demands distracting from their care,” Dr. Eide says. “It’s not just about having insurance and having a doctor you see, it may be about being invested and an advocate for your own health. We found that regardless of their cancer stage at diagnosis, these patients who saw more specialists and had compliance with their fasting lipid panels and other screenings had a better prognosis. This may suggest a role for the patient in improving their health by being engaged and prioritizing their care.”

With health care under transformation from the Affordable Care Act, more patients than ever before will have access to care covered by insurance including preventive services without copays. However, having access to care is not the same as using the care available in the community.

In 2012, the percentage of people who had a usual place to go for medical care was 85.8 percent compared to 86.8 percent in 2011, according to the Centers for Disease Control and Prevention’s 2012 National Health Review Survey. The survey also found that 6.2 percent of the population failed to obtain medical care due to cost.

“As we have more and more patients becoming insured through opportunities with the Affordable Care Act,” Dr. Eide says, “we now have the burden going from not having insurance, to not using the insurance, to not seeking care. The patients in our study all had insurance and in theory all had the same equal opportunities for care. But they received different degrees of care. Some of that may have been at their direction. That is important, perhaps, with cancer prognosis.”