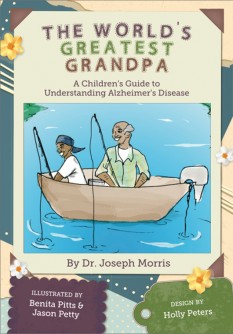 Newswise — How do you explain to a child that Grandpa or Grandma has Alzheimer’s disease?

Gerontologist Joseph Morris Ph.D. ’07 realized that while there is a lot of information written for those caring for Alzheimer’s patients, there’s not much available to help young children understand the devastating disease.

So Morris wrote a children’s book focused on educating parents and children: The World’s Greatest Grandpa — A Children’s Guide to Understanding Alzheimer’s Disease.“In many minority communities,” he says, “there is a strong relationship between grandparents and grandchildren. Yet Alzheimer’s disease and other related dementias are not really discussed. Breaking down the barriers helps start the conversation.”

When Morris was writing the book, he thought about his own personal experiences. His mother developed dementia at an early age, and he remembered how difficult it was to explain to his siblings.

In the book, 10-year-old Quincy and his mom visit Grandpa. But something is wrong — Grandpa doesn’t seem to know Quincy or his mom. So they take Grandpa to the hospital, and after a series of tests, the doctor delivers the diagnosis — Alzheimer’s.

“Writing a children’s book allowed me to explain Alzheimer’s in a way that could be easily understood,” Morris says. “My goal was to show that Quincy’s experience could be the experience of any child, and that you are not alone.”

The book took Morris about a year to write, as he was still representing more than 500,000 nurses as the executive officer of the California Board of Registered Nursing. He shared drafts with educators, researchers and other clinicians to make sure the message was appropriate.

Since the book was published, the feedback has been positive. Readers appreciate the unique concept and applaud the sweet story that is much needed.

Morris’ long-term goal is for the book — which he says was a “labor of love” — to be adopted by community and senior centers, as well as by schools. He would love to see The World’s Greatest Grandpa used in children’s hospitals and embraced by Alzheimer’s-related groups.The book ends with a very positive message: “Just remember the good times — and remember he’s still the greatest grandpa. That didn’t change. The love is still there.”