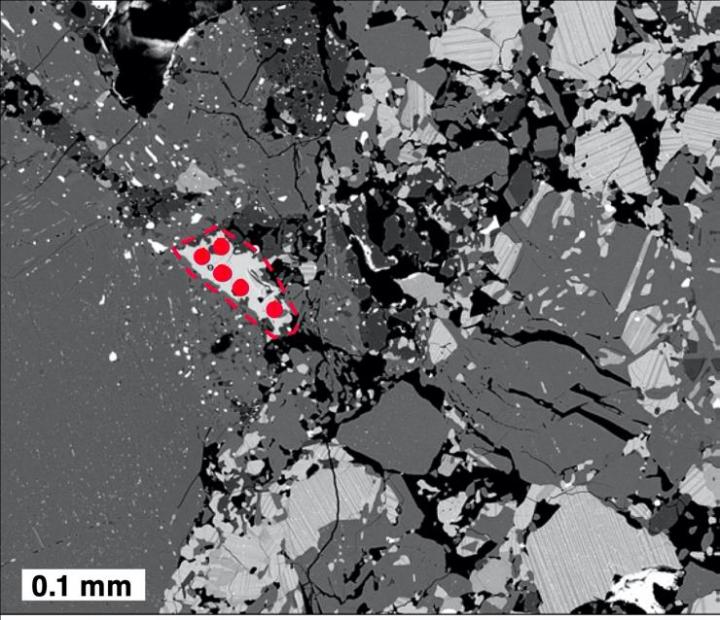 The light gray grain surrounded by the red dashed line is a phosphate mineral, whose U-Pb age was determined as 4.15 billion-year-old. (Meteorite's name: Juvinas) 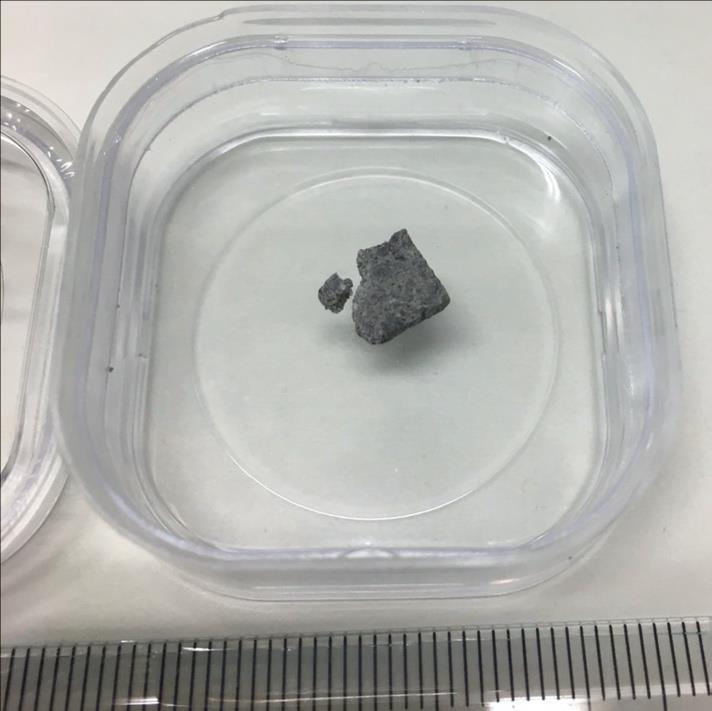 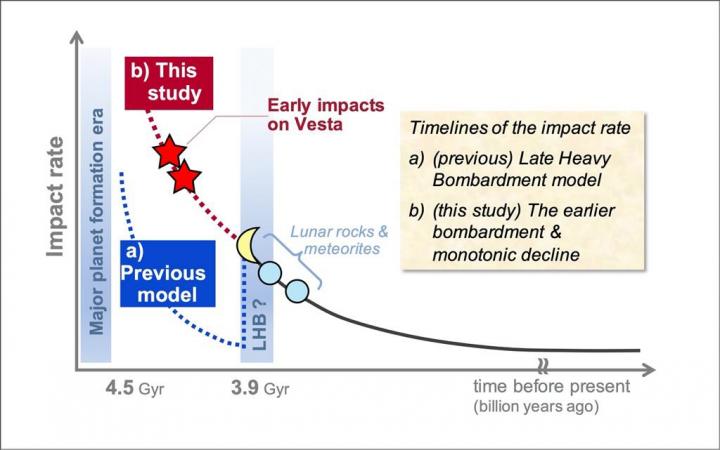 An intense spike at ~3.9 Ga (LHB) was previously expected (the dashed curve 'a'), mainly based on lunar and some meteorites data. This study reports the earlier impacts (~4.4 - 4.15 Ga) from Vesta's rocks, suggesting that the timeline should be modified (probably like the curve 'b').

Newswise — Researchers have shaken up a once accepted timeline for cataclysmic events in the early solar system. About 4.5 Ga (giga-anum, or billion years ago), as a large disc of dust and ice collapsed around our newly formed star, planets and smaller celestial bodies were formed. What followed was a chaotic and violent period of collisions and impacts as the familiar eight planets carved out their orbits to resemble the balanced system we observe today. Geological and geochemical records indicate that after about 600-700 million years after formation - but still early in the solar system's existence - the Earth-Moon system experienced a period of frequent and cataclysmic impacts from asteroids and other bodies. This period is dubbed the late heavy bombardment (LHB) period.

It was once thought that this period had a relatively sudden onset, but a research team at Hiroshima University and The University of Tokyo in Japan have found evidence that this bombardment period may have started much earlier, and decreased in intensity over time.

The team published their findings on August 26 in Earth and Planetary Science Letters.

"According to Apollo's lunar rock studies from the 1970s, the Earth, Moon, and the entire inner solar system are thought to have suffered from numerous meteoritical impacts at around 3.9 Ga. This event is regarded as a key process during the early evolution of our planet, said Mizuho Koike, an author of the study and an assistant professor from The Graduate School of Advanced Science and Engineering at Hiroshima University. "However, the validity of the LHB idea is being questioned recently. To settle this debate, a solid database of the 'impact ages' is required."

The team started building this database using rocks found on Earth that originated from a large, ancient asteroid, called Vesta, to see if they could corroborate the timeframe of the LHB period. If the solar system indeed experienced the LHB period roughly 3.9 Ga, Vesta, like Moon, would likely hold similar evidence of such an event around the same time period. What the team found was a record of impacts 300 to 500 million years earlier than expected.

"We found that the rocks from Vesta recorded the multiple impacts that occurred between 4.4 to 4.15 Ga, clearly earlier than the predicted peak of LHB at ~3.9 Ga. In contrast, no impact evidence was identified at 3.9 Ga or later. These findings suggest that Vesta (and probably other asteroids as well) did not record the LHB. Instead, they experienced massive impacts at the earlier stage," said Koike.

It is still unclear what this means for the LHB period as a whole, but Koike and her colleagues plan to further investigate the chronology of the early solar system.

"Our study reveals that the previously expected impact model was not correct, at least on Vesta," Koike said. "Extrapolating this to the wider solar system, the concept of LHB may not be appropriate to the planets' evolutions, including to the Earth and Moon. To verify such an examination, we are planning to investigate the impact histories on other asteroids and planetary materials by applying our present analytical techniques."

By doing so, the team may be able to add to their database and, ideally, peer with more clarity into our solar systems distant past.

Since its foundation in 1949, Hiroshima University has striven to become one of the most prominent and comprehensive universities in Japan for the promotion and development of scholarship and education. Consisting of 12 schools for undergraduate level and 4 graduate schools, ranging from natural sciences to humanities and social sciences, the university has grown into one of the most distinguished comprehensive research universities in Japan. English website: https://www.hiroshima-u.ac.jp/en

Caption: The light gray grain surrounded by the red dashed line is a phosphate mineral, whose U-Pb age was determined as 4.15 billion-year-old. (Meteorite's name: Juvinas)

Caption: A meteorite named Juvinas is one of the five meteorites studied by scientists

Caption: An intense spike at ~3.9 Ga (LHB) was previously expected (the dashed curve 'a'), mainly based on lunar and some meteorites data. This study reports the earlier impacts (~4.4 - 4.15 Ga) from Vesta's rocks, suggesting that the timeline should be modified (probably like the curve 'b').