Edward Taub, Ph.D., a UAB neuroscientist and developer of Constraint-Induced (CI) therapy, and Lynne Gauthier, a graduate student at UAB, discuss findings showing that CI therapy produces an increase in the gray matter of the brain of stroke patients who undergo the therapy. This is the first representation that a rehabilitation therapy can produce structural changes within the human brain after injury. It is also further proof of neuroplasticity, the brain's ability to remodel itself following traumatic injury. 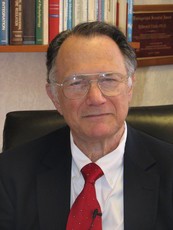 Newswise — A rehabilitation therapy developed by a UAB (University of Alabama at Birmingham) neuroscientist produces changes in the structure of the brain, the first evidence of actual brain remodeling resulting from a rehabilitation therapy. In findings presented online in Stroke, a Journal of the American Heart Association, sophisticated analysis of MRI images of stroke patients showed that Constraint Induced (CI) therapy produced a significant increase in the amount of gray matter present in the brains of patients receiving the therapy.

"This changes all of our perspectives about what is possible in the brain," said UAB neuroscientist Edward Taub, Ph.D., a study author and the developer of CI therapy. "For years, science thought the adult brain was hardwired, with no ability to change or adapt. Now we have further proof of the concept of neuroplasticity, the brain's remarkable ability to respond to damage to compensate for the injury."

The efficacy of CI therapy as a rehabilitation technique for stroke patients has been well documented. Taub and other researchers worldwide have seen remarkable clinical changes in patients, such as dramatically improved use of an affected arm or leg. They also have observed functional changes in the brain, such as increased blood flow or an increase in excitability of brain cells. The new study confirms what Taub and his colleagues have long suspected"¦.that the brain also has the ability to remodel itself structurally.

Gauthier used a sophisticated analysis technique known as voxel-based morphometry (VBM) to measure the amount of gray matter in the outer layers of the brain and the hippocampus, a structure deep in the brain involved in learning and memory. The CI therapy group showed an increase in the amount of gray matter in areas of the brain responsible for motor skills while the comparison group had no increase. The gray matter increase corresponded to a similar increase in the ability of the patients to use the affected arm for activities of daily living in the home situation.

"Interestingly, the patients who demonstrated the greatest improvement in use of the affected arm also showed the greatest increase in the amount of gray matter," Gauthier said.

CI therapy has been increasingly used for stroke rehabilitation since Taub's landmark paper demonstrating its effectiveness was published in 1993 in Archives of Physical Medicine and Rehabilitation. Since then, Taub's laboratory has studied CI therapy with promising results for a number of other conditions, including traumatic brain injury, cerebral palsy and multiple sclerosis.

"We've shown that CI therapy can harness the plasticity of the brain for therapeutic effect in conditions with few practical treatment options," Taub said.

"Coupling CI therapy with other factors affecting neuroplasticity, such as pharmacologic agents or electrical stimulation, may lead to exciting new avenues for research into a host of neurological diseases and developmental disabilities."

Exactly what causes the increase in gray matter is still a mystery, but Taub says there are several possibilities. It may be due to an increase in the amount of blood vessels in the brain, or in the number of synaptic connections established between neurons.

The gray matter increase may also reflect an increase in the amount of glial cells in the brain. But the most intriguing possibility is that the brain is actually creating more neurons.

"The idea that the brain can make new neurons in adulthood"¦neurogenesis"¦has only been accepted by the scientific community in the past several years," said Gitendra Uswatte, Ph.D., associate professor of psychology and a study co-author. "These findings open the door to the possibility that the brain can indeed recover from traumatic injury by creating new brain cells to replace those lost by injury."

This research was funded by a grant from the National Institutes of Health.