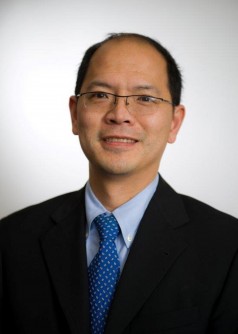 Newswise — The Perlmutter Cancer Center at NYU Langone Medical Center has named noted clinician-scientist Kwok-Kin Wong, MD, PhD, as its new Chief of Hematology and Medical Oncology. His recruitment promises to transform the medical center’s research and clinical programs in lung cancer and to promote innovative collaborations with the pharmaceutical industry on promising scientific discoveries.

Wong joins the Perlmutter faculty in January 2017 following a distinguished, decades-long career at Harvard Medical School and the Dana-Farber Cancer Institute. A professor of Medicine and a practicing clinical oncologist, Wong’s world-renowned research has provided new insight into the genetic and environmental causes of lung cancer, enabling testing of novel lung cancer therapies. He has received acclaim for clarifying the role of genes such as EGFR, ALK and PI3 kinases, which control normal cell growth and survival, but when altered (mutated), become major drivers of abnormal, cancerous growth. By creating genetically engineered mice harboring these mutations, his lab has revealed their contribution to lung cancer development. “We are tremendously excited to welcome Dr. Wong to NYU Langone,” says Benjamin G. Neel, MD, PhD, director of the Perlmutter Cancer Center. “His seminal discoveries have identified genes that play important roles in human lung cancer and have shown us how specific cancers will respond to targeted therapies. He will bring a new vision to our hematology-oncology division, bolster our already outstanding lung cancer research program, and help us to recruit more leaders in the field.”

As Wong explains, “This is an exciting time in cancer research and treatment. Advances in genomic technology, targeted therapy and immunotherapy have now directly improved cancer patient survival. It is imperative that we continue to work together to find new combination treatments for each genetically stratified cancer that work even better.”

While at Dana-Farber, Wong fostered partnerships with the pharmaceutical industry that accelerated cancer drug discovery. He helped direct the pioneering Belfer Center for Applied Cancer Science, a research center dedicated to translating current, oncology research into tomorrow’s treatments. By generating more realistic mouse models that are informed by genomic studies of human lung cancer, he has created new platforms for testing new anti-cancer drugs. His most recent investigations have focused on understanding sensitivity and resistance to targeted therapies and immunotherapy, with the goal of developing curative combination regimens for lung cancer patients.

About Dr. WongWong is the latest internationally renowned researcher to join the faculty of NYU Langone and its Perlmutter Cancer Center over the past two years, enhancing its ability to make breakthrough discoveries in the battle against cancer.

A native of New York City and an undergraduate alumnus of Brown University, Wong earned both his medical degree and his PhD in the Integrated Program in Cellular, Molecular and Biophysical Studies at Columbia University College of Physicians & Surgeons. He was trained in internal medicine at Massachusetts General Hospital and in hematology-oncology at Dana-Farber.

“It is, indeed, a privilege to join Dr. Neel and other distinguished members of the faculty at NYU Langone, and to be part of an expanding effort in research at the Perlmutter Cancer Center,” says Dr. Wong. “I remain fervently committed to advancing cancer research and clinical care while, at the same time, developing partnerships between researchers and industry that are so critical to advancing our understanding and treatment of cancer, and eliminating it in our lifetime.”