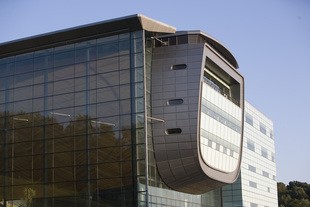 The new Experimental Media and Performing Arts Center (EMPAC) at Rensselaer Polytechnic Institute, an unprecedented experimental center dedicated to the integrated pursuit of the performing arts and sciences.

The project was launched under President Shirley Ann Jackson's Rensselaer Plan, which also has included building one of the world's most powerful university-based supercomputers, opened in 2007, and a major center for biotechnology research, completed in 2004.

EMPAC was made possible by a lead gift of $40 million from Nvidia co-founder and Rensselaer alumnus Curtis R. Priem '82. The building was formally named for Priem at the Oct. 3 dedication.

"EMPAC is an unprecedented platform for creativity and discovery, a world-class performing arts center and a high-tech research facility under one roof," said Jackson. "It is a major center for collaborative inquiry — a center for artists, scientists, and engineers to come together to pursue discovery at the nexus of the real and virtual worlds. It is a platform for seamless, 'minds-on' engagement to respond to complex research questions in areas as diverse as biotechnology, artificial intelligence, and acoustics. EMPAC introduces a new model for educating the next generation of leaders, who will be better prepared to solve the complex problems facing our world."

"The collaborative, interdisciplinary, and project-based approach of EMPAC creates an environment in which scientific and artistic imagination are reciprocal," said Johannes Goebel, director of EMPAC. "The engineer develops technology that may enable the artist to fulfill the creative vision, while the artist challenges the engineer with unexpected approaches to meet the project's needs."

EMPAC is a 220,000-square-foot platform for performance and research designed by acclaimed international architectural firm Grimshaw. EMPAC incorporates four distinct and specialized venues under one roof: an acoustically optimized 1,200-seat concert hall, a 400-seat theater, and two black-box studios created for flexible use by artists and researchers.

Linked to the university's powerful supercomputer (the Computational Center for Nanotechnology Innovations, CCNI), which will enable complex modeling and visualization, EMPAC will be a platform for the Rensselaer campus, its academic partners, and visiting artists from around the globe to experiment in critical fields.

"We could have followed the model of other technological institutions, and elected to expand our humanities, arts, and social science school in the traditional manner," said Samuel Heffner '56, chairman of the Board of Trustees. "But because this idea is uniquely ours, we chose EMPAC instead. Much more than a concert hall, it is a true laboratory and a significant move forward not only for Rensselaer, but for the concept of the blending of arts and technology."

Unique among centers for the performing arts, EMPAC employs a complete curatorial staff specializing in music, dance, and the media arts that collaborate across disciplines and with the center's technology team. For the past four years, this team has worked with artists to create significant programs on the Rensselaer campus, ranging from performances by Australian dance company BalletLab to a major EMPAC-specific light installation by artist Jennifer Tipton. The opening season within EMPAC will include works by The Wooster Group, Toronto-based Workspace Unlimited, The OpenEnded Group from New York City, and the premiere of a series of Dance Movies. Many of these works were commissioned by EMPAC.

Architect Nicholas Grimshaw's design is an imaginative, high-tech set of contiguous, multi-use spaces engineered to the most exacting acoustical standards. A look inside the building brings this vision into sharp focus.

"The design concept for the building was based on the dual program it supports: a world-class concert hall for traditional orchestral music, and cutting-edge, completely flexible spaces for experimental art and media performance or research," Grimshaw said. "The search for a way to express both the history and transience of the building's technological program led us to split the building into halves - the 'digital' half containing the flexible spaces of the studios and theater, and the 'analog' side containing the traditional shoebox shape concert hall." EMPAC is anchored into a 45-degree hill overlooking Troy and the Hudson River. Visitors enter the building's lobby at the top of the hill. A series of bridges cross over a three-story atrium and pierce into a cedar "hull" that houses the concert hall. A grand staircase descends on the side of this space and leads to the theater and black box studio spaces.

EMPAC originally was designed as a 142,000-square-foot building with a budget of $142 million. As the concept was refined, the spaces in the building were expanded, raising the footprint of the building to its current 220,000 square feet, and the budget was increased to approximately $200 million, including construction, technology, and furnishings.

From an engineering and technological standpoint, EMPAC is state-of-the-art. Each of the contiguous spaces is built in acoustic isolation from one another. A massive 20,000-square-foot glass curtain wall features mullions that carry heated water to insulate the space from the Northern New York winter. This is the first time that this technology has been adopted in the United States. The HVAC system, virtually silent to preserve the integrity of performances and research, uses displacement ventilation to push air through registers under the seats. The technology at EMPAC includes more than 8,000 inputs and hardwiring to the university's supercomputer (CCNI).

"What we have created is the world's foremost center for performing arts, technology, and experimental media," said Rensselaer trustee and EMPAC donor Curtis Priem '82. "We set out to build a performing arts and research center with unparalleled technology throughout the building, from acoustics and lighting to heating and cooling, and we have achieved that."

Rensselaer will celebrate the opening of EMPAC with three weekends (October 3 to 19) of symposia, performance events, and guest artist appearances. For a complete schedule of events, please visit: http://www.empac.rpi.edu.