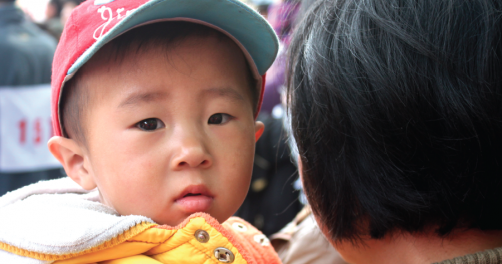 Credit: Chapin Hall at the University of Chicago

The Report on the State of Children in China was released March 14 at the University of Chicago Center in Bejing.

Report on the State of Children in China

Newswise — A new comprehensive study of children’s well-being in China reveals glaring disparities in education, economic conditions and emotional health between rural and urban children and the need for educational and public policy reforms to help close those gaps.

Even as China’s economic growth fuels improved living conditions in much of the country, it challenges others: Children “left behind” when parents move to urban areas for work are particularly vulnerable, according to the study.

The report analyzes data from the China Family Panel Studies, which addresses all major areas of child development and risk factors such as family economic conditions, living arrangements and neighborhood support. When the data were collected in 2010, China was home to 222.6 million children aged 14 and under.

“It’s not just about the children, it’s about the future of the society,” said Dali Yang, the William Claude Reavis Professor of Political Science at UChicago and one of the report’s authors. Yang is founding faculty director of the UChicago Center in Beijing.

However, predicting a society’s future requires knowledge of its past. In China, although decades of central planning and population control efforts have improved quality of life for many citizens, they continue to divide urban and rural residents.“Hukou” registration

In the late 1950s the government established a “hukou” system of household registration under which individuals were categorized as agricultural or non-agricultural residents. Access to public services such as education, employment and healthcare is tied to a person’s residential status.

China’s industrialization and economic development has led to relaxed limits on migration, but parents’ inability to get government housing or public education in these cities because of their rural hukou has meant that three-quarters of migrant workers leave their children behind. An estimated 61 million children live with a single parent, elderly relatives, or sometimes no one because of parent migration.

The research shows that 25 percent of all children in rural communities are left-behind children, and another 5 percent live with only one or no parent for other reasons such as death, divorce or abandonment. Among urban children, 15 percent are migrants with mostly rural hukous, meaning limited educational and welfare opportunities.

Family planning policies that for 30 years limited urban couples to one child and rural couples to two at most boosted economic resources but also led to abandonment of children or selective sex abortion that skewed male/female ratios. Fewer children led the government to consolidate rural schools, making them harder to access for many students.

They suffer socially and emotionally as well: 25 percent of the left-behind children and 26 percent of migrant children have no confidence in their future. Report co-author Lijun Chen, a senior researcher with Chapin Hall, said he was surprised at the low education levels of the parents. Since the late 1980s, China has required at least nine years of schooling.

“High school is not compulsory, but since the 1990s China has been expanding the high school component, so I thought most parents would have high school educations,” he said. “But that is not the case.”

While other studies have looked at physical and economic well-being of left-behind and migrant children, this study is the first to use a statistically valid sample and to measure social and emotional well-being including subjective measures like self-esteem and a sense of happiness.

“So far as we know, this report is the most comprehensive in examining the well-being of the children in China,” the report stated. Chen and Yang hope it will serve as a baseline for ongoing longitudinal surveys.

They and co-author Qiang Ren of Peking University said that although many causes of the rural-urban disparity in child well-being can be traced to differences in living conditions, income, family functioning and the community, “China still needs to restructure many current government policies and practices in order to promote the best interests and well-being of children.”

They recommend abolishing policies that exclude migrant workers and their families from urban schools and services so “the number of left-behind children should decrease as children are able to migrate with their parents.”

They also recommend government investment in student transportation and better teacher training and compensation to improve the quality of public schooling for rural children; more early childhood education programs; and more childcare assistance to rural families. They suggest that local governments in areas with concentrations of vulnerable children set up an agency to coordinate the provision and delivery of services to them.

The authors released preliminary findings last July but have invited Chinese media, public officials and representatives of international child welfare organizations to discuss the final report at the "Seminar on Child Wellbeing and Development in China," in connection with its release.

“We hope to get our message out to the public as well as the administrators,” Chen said. Although government officials have been taking steps to address some of the inequities, “how to find economic resources to tackle these problems is a big issue.”

"No matter how challenging the problems are, it makes sense to focus on the children, Chen said.—Susan Keaton