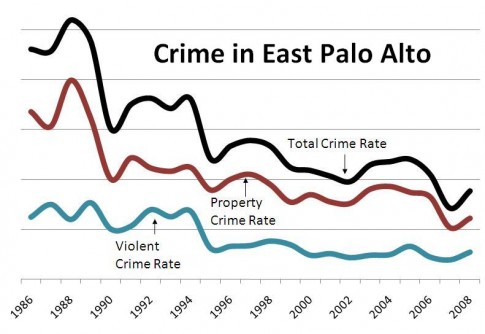 Newswise — An independent analysis of data in East Palo Alto shows a dramatic drop in crime over the past two decades. Once known as the U.S. per capita “murder capital,” the California city’s crime rate dropped 62% between 1986 and 2008, according to a new report released today by UC Berkeley School of Law’s Berkeley Center for Criminal Justice.

The report, Crime Trends in the City of East Palo Alto found declines in all major crime types: property crime dropped by 64%, while violent crime was down by 56%. Although crime declined across California, East Palo Alto’s decline was much more precipitous: a 62% drop compared to the state’s 49% decline.

The reduced crime rates occurred despite East Palo Alto’s burgeoning population, and its limited resources. The city’s populace grew by a remarkable 75% between 1986 and 2008 compared to 36% growth for the state. At the same time, the city’s police department has been consistently understaffed compared to cities of the same size and with similar violent crime rates in California.

East Palo Alto Police Chief Ronald Davis credits the downward crime trend to the city’s “extremely active community,” its focus on at-risk youth, and its programs that reduce parolee recidivism, among others.

“The crime report reinforces the importance of our community partnerships and the programs we provide to support disadvantaged kids while striving to reduce gang violence,” Davis said. “The data analysis will help us refine and improve our policing strategy and guide our allocation of scarce resources.”

Berkeley Law’s Center for Criminal Justice program director and report co-author, Sarah Lawrence, said “The report offers city leaders, community groups, and the residents of East Palo Alto a first-ever historic analysis of crime in the city: when and where it happens, how often, and by whom. The goal is to help the city become a safer and more secure community in the long-term,” she said.

The level of violence in East Palo Alto remains very high, despite the city’s crime reduction. In 2008, one of the lowest years on record, the violent crime rate was still about twice as high as the state average. East Palo Alto still ranks in the top ten cities in California in aggravated assault, homicide, and rape.

“We’ve got a long way to go to create a truly safe and secure city,” said Chief Davis, “but our community has made a difference already. We need to stay the course and shred the image of East Palo Alto as a murder capital. The Berkeley Law report will help us make better-informed decisions moving forward,” he said.