The University of Iowa research finds many high-ability children bored and unchallenged, despite increased access to programming 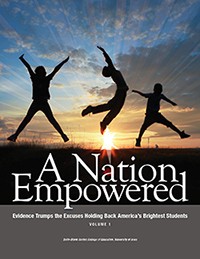 Newswise — The report A Nation Deceived: How Schools Hold Back America's Brightest Students changed the conversation about academic acceleration in this country's schools when it was published 10 years ago.

Although access to programs and support for gifted students has grown since then, editors Susan Assouline and Nicholas Colangelo knew their work wasn't done. Far too many high-ability children are still languishing in classrooms, bored and unchallenged, their potential lost and futures jeopardized.

Now these researchers, professors, and top administrators with the University of Iowa's College of Education are updating their call to action with A Nation Empowered: Evidence Trumps the Excuses Holding Back America's Brightest Students. This two-volume report is designed to "empower" parents, educators, administrators, and policy-makers with evidence and tools to implement 20 types of acceleration, which include early entrance to school, grade-skipping, moving ahead in one subject area, or Advanced Placement courses.

And just as important, A Nation Empowered aims to keep the conversation about acceleration going.

"The first report was an unmasking—an exposing of the reality about acceleration," says Assouline, director of the UI College of Education's Belin-Blank International Center for Gifted Education and Talent Development. "This report is about making decisions about what we know."

There will be a public launch event for A Nation Empowered from 4 to 5:30 p.m. Saturday, April 18, during the 2015 Annual Meeting of the American Educational Research Association (AERA) in Chicago. The event will take place at the Water Tower, West Tower - Bronze Level of the Hyatt Regency Chicago. Light refreshments will be served.

In their groundbreaking first report, Assouline and Colangelo exposed disparities between the research on acceleration and the educational beliefs and practices that often run contrary to research. They showed research supports acceleration as the most effective curriculum intervention for gifted children. For bright students, acceleration is not only cost-effective but has long-term beneficial effects, both academically and socially.

A Nation Empowered builds on those notions.

"It goes beyond affirmation," says Colangelo, dean of the College of Education and director emeritus of the Belin-Blank Center. "It presents solid, unequivocal evidence that can be used."

Volume 1 includes personal stories from students, teachers, and families while Volume 2 presents the evidence-based research with eight new chapters and updates to chapters that appeared in the first report.

Ultimately, the hope of A Nation Empowered is to continue pushing the needle toward dispelling myths about acceleration for gifted students, says Joyce VanTassel-Baska, a contributing author in Volume 1 and professor emerita and founding director of The Center for Gifted Education at the College of William and Mary.

"A powerful argument can be made, based on research, about the importance of acceleration for gifted students," says VanTassel-Baska in chapter one of A Nation Empowered. "Yet false ideas about the supposed dangers of moving students through school faster still get air time in teachers' lounges and at neighborhood kitchen tables."

Andrew and Kimberly Carter know all too well the challenges of advocating for a gifted child. When Andrew Carter accepted a coaching job at the UI, his son Mason moved from a streamlined program for gifted children in Miami to a school district in Iowa that did not have a full-time, self-contained gifted program.

For months, the Carters’ son struggled, bored in the regular classroom. Eventually, the couple began research of their own, which included reading A Nation Deceived and understanding the Iowa Acceleration Scale. They pushed for whole-grade acceleration, and after additional testing and a number of meetings with district-level administrators and teachers, their son was allowed to skip the sixth grade.

"In our journey so far, we’ve learned that educators and educational administrators face parents with gifted claims all the time," Andrew Carter says. "As you might expect, they naturally enter into those discussions with a great deal of skepticism, not to mention assumptions that the claims are driven by adult ego more than anything.”

Carter says if you want to be taken seriously, know the research and the signs of a gifted child.

"Speak to experts in the field, like those at Belin-Blank and be prepared to have your son/daughter tested and to have honest discussions about him/her," he says. "You need to be able to hear the truth, even if it’s not what you want to hear."

Above all, the Carters encourage parents to stay involved with their child's day-to-day activities in school.

"Don't get distracted by trying to fix the entire system," Andrew Carter says. "That may sound like a selfish approach, but it's not. It's a manageable approach."

While A Nation Empowered continues to chip away at misconceptions about the dangers of acceleration—chapters in Volume 2 are authored by 30 different experts in the field—researchers like Assouline and Colangelo know work remains to be done on behalf of America's brightest students. They say training teachers and galvanizing more attention at the federal level are among the biggest issues facing gifted education.

As for the future, Assouline and Colangelo hope educators continue to use technology to customize education for bright students and that researchers develop new methods for identifying gifted students from diverse backgrounds.

But perhaps what inspires Assouline and Colangelo most are the stories they hear from adults who were accelerated as children.

"From everything we're able to gather, acceleration was really a plus in their lives," Colangelo says in the report. "The part that stuck with me is that these students, later in life when they're adults, are saying if they could do it over again, they'd want more chances at acceleration.”