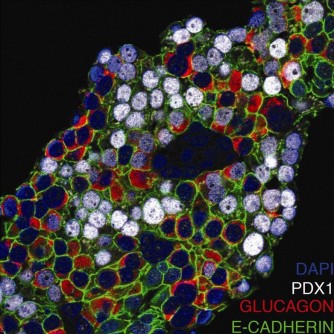 Newswise — PHILADELPHIA – For years researchers have been searching for a way to treat diabetics by reactivating their insulin-producing beta cells, with limited success. The "reprogramming" of related alpha cells into beta cells may one day offer a novel and complementary approach for treating type 2 diabetes. Treating human and mouse cells with compounds that modify cell nuclear material called chromatin induced the expression of beta cell genes in alpha cells, according to a new study that appears online in the Journal of Clinical Investigation.

“This would be a win-win situation for diabetics - they would have more insulin-producing beta cells and there would be fewer glucagon-producing alpha cells,” says lead author Klaus H. Kaestner, Ph.D., professor of Genetics and member of the Institute of Diabetes, Obesity and Metabolism, Perelman School of Medicine, University of Pennsylvania. Type 2 diabetics not only lack insulin, but they also produce too much glucagon.

Both type 1 and type 2 diabetes are caused by insufficient numbers of insulin-producing beta cells. In theory, transplantation of healthy beta cells – for type 1 diabetics in combination with immunosuppression to control autoimmunity - should halt the disease, yet researchers have not yet been able to generate these cells in the lab at high efficiency, whether from embryonic stem cells or by reprogramming mature cell types.

Alpha cells are another type of endocrine cell in the pancreas. They are responsible for synthesizing and secreting the peptide hormone glucagon, which elevates glucose levels in the blood.

“We treated human islet cells with a chemical that inhibits a protein that puts methyl chemical groups on histones, which - among many other effects - leads to removal of some histone modifications that affect gene expression,” says Kaestner. “We then found a high frequency of alpha cells that expressed beta-cell markers, and even produced some insulin, after drug treatment.

Histones are protein complexes around which DNA strands are wrapped in a cell’s nucleus.

The team discovered that many genes in alpha cells are marked by both activating- and repressing-histone modifications. This included many genes important in beta-cell function. In one state, when a certain gene is turned off, the gene can be readily activated by removing a modification that represses the histone.

“To some extent human alpha cells appear to be in a ‘plastic’ epigenetic state,” explains Kaestner. “We reasoned we might use that to reprogram alpha cells towards the beta-cell phenotype to produce these much-needed insulin-producing cells.”

Penn Medicine is one of the world's leading academic medical centers, dedicated to the related missions of medical education, biomedical research, and excellence in patient care. Penn Medicine consists of the Raymond and Ruth Perelman School of Medicine at the University of Pennsylvania (founded in 1765 as the nation's first medical school) and the University of Pennsylvania Health System, which together form a $4.3 billion enterprise.The Perelman School of Medicine is currently ranked #2 in U.S. News & World Report's survey of research-oriented medical schools. The School is consistently among the nation's top recipients of funding from the National Institutes of Health, with $479.3 million awarded in the 2011 fiscal year.

The University of Pennsylvania Health System's patient care facilities include: The Hospital of the University of Pennsylvania -- recognized as one of the nation's top "Honor Roll" hospitals by U.S. News & World Report; Penn Presbyterian Medical Center; and Pennsylvania Hospital — the nation's first hospital, founded in 1751. Penn Medicine also includes additional patient care facilities and services throughout the Philadelphia region.

Penn Medicine is committed to improving lives and health through a variety of community-based programs and activities. In fiscal year 2011, Penn Medicine provided $854 million to benefit our community