Repurposing a drug for abdominal cancer 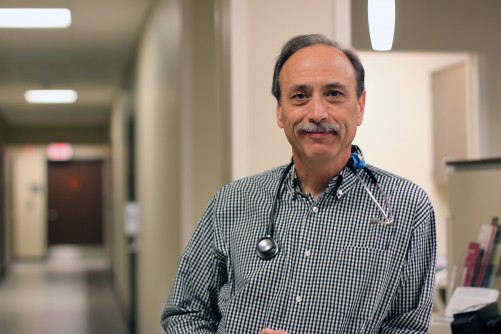 Newswise — A repurposed drug originally used to treat ovarian cancer saw positive results for patients with advanced peritoneal cancers during a phase I clinical trial at The University of Kansas Cancer Center.

The drug, known under the brand name Nanotax, is a fine particle reformulation of paclitaxel, the standard treatment for ovarian cancer. The drug was developed by Lawrence-based CritiTech, and the drug-testing and phase I clinical trial were conducted by KU Cancer Center researchers, led by Stephen Williamson, M.D., medical director of Cancer Clinical Trials.

Nanotax works by flipping the script on how paclitaxel is administered to patients and with how it’s formulated, potentially making it a more effective and better tolerated treatment for ovarian and other abdominal cancers.

During the trial, five out of 21 late-stage cancer patients survived more than 400 days after being treated with Nanotax at high concentrations for more than four weeks. Seventy four percent of enrolled patients were diagnosed with ovarian cancer with tumors that had relapsed and metastasized in the peritoneum, the membrane that lines the abdominal cavity. The treatment was well tolerated by patients and there were no serious adverse reactions reported from the drug.

The main purpose of phase I clinical trials are to evaluate the safety of a new drug, helping researchers determine the maximum dose that can be given safely as well as any harmful side effects. Patients enrolled in phase I trials can no longer be treated effectively with standard treatments.

Although the effectiveness of the new drug is not the main concern of a phase I trial, Dr. Williamson noted it was promising that five of the patients survived more than a year after starting the drug.

“Because these patients have advanced disease, we didn’t think we’d see much benefit,” said Dr. Williamson. “But some patients stayed on it for a longer period of time, which is more than what we expected and is promising.”

Unlike regular paclitaxel, which is given intravenously over a few hours, Nanotax is given as a bolus injection, a single large dosage all at once. It’s injected directly into the peritoneum through a catheter, which exposes the tumors to higher concentrations of the drug compared to standard IV paclitaxel treatment.

“The fine particles of this drug allow for it to be released slowly and stay in the abdomen,” said Katherine Roby, Ph.D., research associate professor in the Department of Anatomy and Cell Biology at KU Medical Cancer, who started her pre-clinical work on Nanotax more than a decade ago. “The concentration of the drug stays higher in the space where the cancer is, killing more cancer cells. This allows less of the drug to be absorbed systemically and fewer side effects.”

The lack of major side effects is also a good sign for future usage of Nanotax. When regular paclitaxel is given to patients, it is mixed with ethanol and castor oil derivative, and many patients develop an allergy to that additive (all patients are pretreated to prevent serious allergic reactions). Nanotax is the fine particle formulation of paclitaxel mixed with saline, which the body can absorb and tolerate much better without the allergy risk.

“The significance of this trial is that many patients… develop an allergy to what is mixed with paclitaxel, creating more side effects,” said Dr. Williamson. “This new drug eliminates those side effects because it stays in its pure form and doesn’t need the problematic agent mixed with it.”

Because Nanotax is a repurposed form of an already in-use drug, it shortened the time between animal and patient trials. If the drug makes it through subsequent patient trials, it will be available for doctors to prescribe much sooner than a drug created from scratch. The time it takes for a new drug to go from bench to prescription pad can be staggering—typically three to six years are needed for development before it’s even ready for safety and efficacy testing, according to the Pharmaceutical Research and Manufacturers of America.

CritiTech will be working with the U.S. Food and Drug Administration when it comes to the next phases of testing and developing Nanotax.

“We may be testing this drug in combination with others in the next phase of trials,” said Dr. Williamson. “It does make it easier to get to patients sooner since paclitaxel is already on the market and we know a lot about how it works.”Ovarian cancer is difficult to treat because it’s not often diagnosed until it has already metastasized to the peritoneum, liver or lung, the most common sites of metastasis according to the National Cancer Institute. Sixty one percent of ovarian cancers have already metastasized at diagnosis, according to the National Cancer Institute. About 44.6 percent of patients survive five years after being diagnosed. Other cancers that can metastasize to the peritoneum include pancreatic, colorectal, liver and bladder cancers.

“Ultimately, everyone is hoping it will be a first line of treatment for these types of abdominal cancers,” said Dr. Roby. “And from the results of this phase I trial, it should clear the way for the drug to move forward in that direction.”