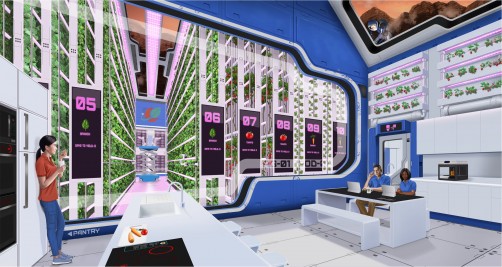 Newswise — A new research centre, led by the University of Adelaide, will focus international expertise on finding ways to provide the next generation of space explorers with nutritious foods, and the on-demand supply of materials and medicines.

Announced today, Friday 4 November, the Australian Research Council (ARC) Centre for Excellence in Plants for Space (P4S) will help to establish a long-term human presence in space, while also developing innovations on Earth.

The Australian government is providing $35 million in funding for the new Centre which will be for seven years initially. Additional cash and in kind support from the 38 P4S partners brings the total value to approximately $90 million.

“The mission of P4S is to re-imagine plant design and bioresource production, through the lens of space, to enable off-Earth habitation and provide transformative solutions to improve on-Earth sustainability,” said the University of Adelaide’s Professor Matthew Gilliham, Director of the new Centre of Excellence.

“Work undertaken by experts from the Centre will also deliver a step change in plant efficiency, productivity, and processing technologies here on Earth.”

“The mission of P4S is to re-imagine plant design and bioresource production, through the lens of space, to enable off-Earth habitation and provide transformative solutions to improve on-Earth sustainability."The University of Adelaide's Professor Matthew Gilliham, Director, ARC Centre of Excellence Plants for Space

“P4S represents an international authority and focal point for plant-based space food, material, and engineering research. It will create new technologies and capabilities in plant modification to translate research into applications in space and on Earth,” said P4S Deputy Director and Products program lead, Professor Sally Gras from the University of Melbourne.

“By training more than 400 researchers, P4S will produce the next generation of internationally connected and industry-focused experts, and accelerate the growth of the burgeoning national and international CEA and biomanufacturing industries,” added P4S Deputy Director and Processes program lead, Professor Melissa de Zwart from Flinders University.

“Long-term off-Earth habitation is on the horizon. However, key challenges remain, which will be addressed head-on by P4S. Mission success depends on having nutritious food and medicines without the need for resupply missions from Earth,” said P4S Plants program lead, Professor Harvey Millar from the University of Western Australia.

“The collective multidisciplinary expertise within P4S will lead innovation in space plant production systems, and realise the Centre’s multi-faceted legacy to fulfil the ambition of humans to explore beyond Earth.”

P4S will be an Australian contribution to NASA’s Artemis accords, which have been signed by 21 countries including Australia. The Artemis mission plans to put the first woman and person of colour on the Moon by 2030 and to develop the technologies required for humans to venture to Mars and return to Earth in the 2040s. The first phase of the mission is expected to launch and return to Earth by the end of 2022.

Head of the Australian Space Agency, Mr Enrico Palermo, said: "As humankind looks to return to the Moon, this time we do it with the view to establishing a sustainable presence that will allow us to explore further than ever before.

“There are many challenges associated with ensuring humans can live sustainably on the Moon. P4S is just one way in which Australia can contribute to making this happen as part of our commitment to the Artemis Accords.

“We're excited about the possibilities this brings and the opportunities it creates for our growing space sector.”