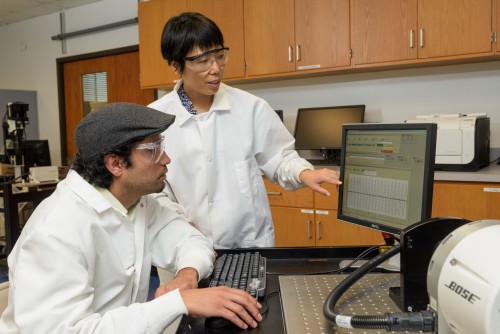 A lesser-known but equally grave complication is the effect of diabetes on bone health.

“Clinical trials have revealed a startling elevation in fracture risk in diabetic patients,” says Liyun Wang, associate professor of mechanical engineering at the University of Delaware. “Bone fractures can be life threatening — nearly one in six hip fracture patients dies within a year of injury.”

Because physical exercise is proven to improve bone properties and reduce fracture risk in non-diabetic people, Wang and her research group decided to test its efficacy in Type 1 diabetes.

The findings of their study are reported in an article, “Bone’s Responses to Mechanical Loading Are Impaired in Type 1 Diabetes,” in the journal Bone, published online on July 13.

Wang explains that osteocytes, or bone cells, are critical to maintenance of the tissue quality and mechanical integrity of bone. As the primary “mechanosensing” cells, osteocytes orchestrate bone’s adaptation processes under mechanical cues such as exercise.

“We suspected that the response of diabetic bone to mechanical loading would be compromised due to impaired mechanosensing of osteocytes under hyperglycemic, or high blood sugar, conditions,” she says.

The study demonstrated that exercise-induced bone formation was maintained in mildly diabetic mice at a similar level as non-diabetic controls, while the positive effects of exercise were nearly abolished in severely diabetic mice. At the cellular level, the researchers found that hyperglycemia reduced the sensitivity of osteocytes to mechanical stimulation and suppressed osteocytes’ secretion of proteins and signaling molecules that help build stronger bone.

“Our work demonstrates that diabetic bone can respond to exercise when the hyperglycemia is not severe, which suggests that mechanical interventions may be useful to improve bone health and reduce fracture risk in mildly affected diabetic patients,” Wang says.

“Coming at it from the other side, our results stress the importance of maintaining good control of blood sugar in diabetic patients so that exercise can do its work in maintaining bone health.”

To translate the findings of the study to patient care, Wang’s team has begun to collaborate with Dr. Jim Lenhard, director of the Center for Diabetes and Metabolic Diseases at Christiana Care Health System.

“Decreased bone strength and an increase in fragility fractures is one of the least recognized complications of diabetes,” says Lenhard.

The plan for collaboration between the University of Delaware and Christiana Care is to evaluate these research findings in humans and expand the research to include other complications of diabetes, such as cardiovascular disease.

“The leading cause of death in America is cardiovascular disease, and the majority of people with diabetes will die from this,” Lenhard adds.

The paper was co-authored by Wang and X. Lucas Lu (UD Department of Mechanical Engineering) and Lidan You (University of Toronto).