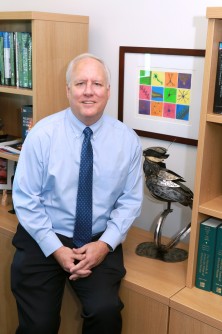 Newswise — Alterations in a naturally occurring chemical in the brain called serotonin have been linked to a number of neuropsychiatric disorders including depression, anxiety, obsessive-compulsive disorder as well as autism spectrum disorder (ASD). Randy Blakely, Ph.D., executive director of Florida Atlantic University’s Brain Institute and a professor of biomedical science in FAU’s Charles E. Schmidt College of Medicine, and his team, have been studying this mood-regulating gene in the brain that carries signals across the synapse, or the gap between nerve cells. The supply of serotonin is tightly regulated by the serotonin transporter (SERT) and inappropriate shifts in SERT activity can have dramatic consequences.

Blakely first identified and cloned the SERT gene about 25 years ago, and recently received a $2.3 million grant from the National Institutes of Health (NIH) to continue his research efforts to gain a better understanding of how SERT is regulated. Through this research, Blakely and the team pursue studies that can reveal critical insights into the mechanisms producing overactive SERT, changes that can drive diminished serotonin signaling during development and in adulthood. Blakely’s ultimate goal: to provide new ways of treating several widespread neuropsychiatric disorders associated with perturbed serotonin signaling.

“Serotonin transporters are an important research subject because they are the target for the most commonly used drugs prescribed by physicians worldwide to treat depression,” said Blakely. “By understanding how the brain can naturally turn serotonin transporter activity up and down, we may be able to develop more efficacious medications and ones with milder side-effects. We suspect that the study of inappropriately regulated SERT proteins during development may yield insights into pediatric onset behavioral disorders such as autism whereas an understanding of poor SERT regulation during adulthood may yield insights into mood disorders, such as depression.”

A particularly important class of antidepressant drugs called selective serotonin reuptake inhibitors (SSRIs) includes medications such as Prozac™, Lexapro™, and Zoloft™. These medications are thought to work by blocking the ability of SERT to eliminate serotonin. A downside of their action is that these drugs must fully shut down the brain’s serotonin transporters to achieve a clinical benefit. However, this manipulation can produce a number of unpleasant side effects such as nausea, weight gain, sexual problems, fatigue and insomnia. Blakely’s research is motivated by the concept that resetting the normal regulation of SERT, rather than eliminating its function, may be a more subtle, and ultimately a more effective way to control serotonin signaling.

How SERTs are regulated in the brain and periphery (SERT also is found in the placenta and gut) as well as how poor SERT regulation can elevate risk for mental illness remains poorly understood. Blakely, an expert in the field of neurotransmitter transporter genetics, with a long-standing interest in SERT, works with mouse models that express inherited genetic variation in human SERT, including the hyperactive SERT Ala56 variant that is the focus of his NIH-funded project. His work with the SERT mutation dovetails with earlier studies that showed that inflammatory agents can enhance the activity of SERT, suggesting that the SERT Ala56 mutation may produce an activation SERT during brain development, mimicking the effect that inflammation imposes on adult SERT.

How might “inflamed SERT” drive risk for mental illness? Blakely notes that depression-like feelings often accompany flu-like disorders. “Many people exhibit signs of lethargy, loss of appetite, and a depressed mood during these times,” said Blakely. “We have generally considered this to be a consequence of simply being physically ill, but many scientists now think there is more to it, and that something more brain-centric is at work here.”

Blakely believes that an activation of SERT may be an important part of this response, given the protein’s central role in limiting serotonin levels, essentially kicking the transporter into overdrive and diminishing serotonin availability to carry its natural function.

“If we can figure out how SERT activity is changed by inflammation, we just might gain more traction with depression,” says Blakely.

But it’s not just the occasional sickness that adults feel that got Blakely’s attention and that drives his interest in an immune-SERT connection. Prenatal infection has been associated with risk for ASD, as have altered brain and blood serotonin levels. Blakely theorizes that activation of SERT in the developing child could contribute to ASD and perhaps other behavioral disorders with a pediatric onset. Researchers have shown that treating mice with SERT blockers during early development can induce long-lasting anxiety-like behavior, though little evidence supports the ability of maternal use of SSRIs increase risk for ASD. Blakely notes that these studies are difficult to conduct due to the lack of a control group of healthy mothers given SSRIs.

“We also suspect that too much SERT activity, possibly triggered by maternal infection, might be just as bad as a loss of SERT,” said Blakely.

Blakely was compelled toward this hypothesis when in 2005, he and his collaborator James Sutcliffe, Ph.D., at Vanderbilt University School of Medicine, identified multiple, rare genetic variations in children with ASD that enhance SERT function. One of these is the SERT Ala56 mutation. The researchers concluded that excess activity of SERT could result in reducing normal levels of serotonin that help steer brain development, ultimately leading to long-standing changes in the fine wiring of the brain.

Support for contributions of hyperactive SERT to facets of ASD were recently obtained in studies of the gut of Blakely’s mutant mice, a tissue rich in both serotonin and the transporter. In this work, Blakely’s collaborators Kara Margolis, M.D., Michael D. Gershon, M.D., and Jeremy Veenstra-VanderWeele, M.D., of Columbia University demonstrated that SERT Ala56 mice exhibit have poor peristalsis, supported by disrupted development of the neural network that drives gut contractions. What’s more, these changes could be prevented if pregnant mice were treated to limit the effect of excess SERT. The importance of this work may extend beyond what Blakely sees in his mice, since bowel disorders are a prominent medical problem for many people with ASD.

“Most of all, this work was very exciting in giving us proof-of-concept that early life pharmacological treatments could reduce at least some of the features of ASD,” said Blakely.

Blakely is now searching for ways to remedy hyperactive SERT in adult mice.

“In order to do that we really have to understand why the transporter goes into overdrive,” said Blakely. “The SERT Ala56 mutation is rare, whereas the prevalence of ASD has grown to 1 in 68 children according to the Centers for Disease Control.”

Blakely theorizes that the activation of SERT seen with immune activation may ultimately induce changes in SERT structure that mimic the changes seen with the Ala56 mutation. Support for this idea comes from new, early research studies by Blakely lab member Matthew Robson, Ph.D., research assistant professor of biomedical science, who has been able to reverse behavioral changes in the SERT Ala56 mice by treating them with an anti-inflammatory agent.

“Time will tell whether our hypothesis is correct and whether it can drive the development of novel medications,” says Blakely. “The path from molecule to treatment is certainly a long and winding one, but without the support of the National Institute of Mental Health, as well as the Simons Foundation, we wouldn't even be on the road.”

Inaugurated in 2016 on the John D. MacArthur Campus in Jupiter, Fla., the FAU Brain Institute supports research, education and community outreach among more than 100 faculty faculty level researchers at FAU and its affiliate research centers. One of FAU’s four pillars that guide the University’s goals and strategic actions, the Institute seeks to unlock the secrets of brain development, function and plasticity and how the mechanisms uncovered can be compromised to drive devastating brain disorders. From the study of neuronal development and signaling to investigations of brain diseases including addiction, autism, Parkinson’s and Alzheimer’s disease, researchers from FAU’s Brain Institute seek to generate knowledge that benefits society. For more information about the Institute and its members, visit www.ibrain.fau.edu.