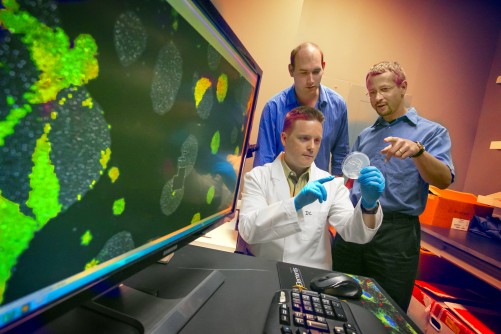 Newswise — Stony Brook, NY, August 28, 2015 – Scientists have not been able to understand and predict how cells evolve in our bodies, and this process is important because evolving cell populations are at the core of drug-resistant infections and cancer development. Now a research team led by Gábor Balázsi, PhD, of Stony Brook University, has developed a synthetic biological model that validates computational predictions of how quickly and in what manner cells change in the presence or absence of a drug. Their findings are published in a paper in Molecular Systems Biology.

Stress response networks in cells play key roles in cellular evolution and pathogenic processes. In “Stress-response balance drives the evolution of a network module and its host genome,” the research team combined the use of synthetic, computational and experimental evolutionary biology methods to integrate a synthetic two-gene circuit into a yeast genome and then follow its evolution. Using quantitative knowledge of the gene circuit, they developed two computational models to predict specific aspects of evolutionary dynamics in six different environmental conditions. They then validated experimentally the predictions: the speed of the original genome disappearing from the cell population, and the types and numbers of mutations established in each environmental condition.

“Our method helps to simplify and quantify the daunting problem of predicting and preventing the evolution of cells,” says Dr. Balázsi, Henry Laufer Associate Professor in the Laufer Center for Physical & Quantitative Biology and the Department of Biomedical Engineering at Stony Brook University. “With this synthetic construct inserted into yeast cells, we made a desired fraction of the cells drug-resistant and slower-growing. We constructed fitness landscapes, which are like maps that tell how fast cells divide depending on the activities of genes they carry. These helped us predict the speed and mechanisms of evolution. The method suggests that similar fitness landscapes can be constructed, and we should be able use the method to predict the first steps of how some other cells and networks evolve.”

The researchers validated the computational predictions by allowing cells to evolve after adjusting gene expression in the absence or presence of environmental stress, defined by way of an antibiotic.

Dr. Balázsi explained that the research team’s work could help synthetic biologists build bio devices more resistant to evolutionary degradation, to produce cheaper medications, biosensors and a cleaner environment. It could also serve as a model to investigate and understand natural cellular evolution and stability. He emphasized that learning how to predict the evolution of cells in a human-designed cell system may give researchers clues how to predict the evolution of cancer cells and pathogenic microbes that invade our bodies, and therefore save human lives by preventing the evolution of these deadly cell types.