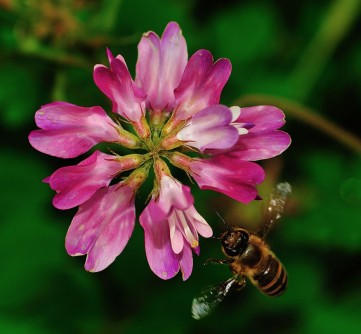 Wayne State University researchers led a team that has identified a single gene in honeybees that separates the queens from the workers.

Newswise — DETROIT — A research team led by Wayne State University, in collaboration with Michigan State University, has identified a single gene in honeybees that separates the queens from the workers. The scientists unraveled the gene’s inner workings and published the results in the current issue of Biology Letters. The gene, which is responsible for leg and wing development, plays a crucial role in the evolution of bees’ ability to carry pollen.

“The gene — Ultrabithorax, or Ubx — is responsible for making hind legs different from fore legs so they can carry pollen” said Aleksandar Popadic, associate professor of biological sciences in Wayne State University’s College of Liberal Arts and Science and principal investigator of the study. “In some groups, like crickets, Ubx is responsible for creating a ‘jumping’ hind leg. In others, such as bees, it makes a pollen basket — a ‘naked,’ bristle-free leg region that creates a space for packing pollen.”

“Other studies have shed some light on this gene’s role in this realm, but our team examined in great detail how the modifications take place,” added Zachary Huang, MSU entomologist. Ubx represses the development of bristles on bees’ hind legs, creating a smooth surface that can be used for packing pollen. This important discovery can be used as a foray into more commercial studies focused on providing means to enhance a bee’s pollination ability – the bigger the pollen basket, the more pollen that can be packed in it and transported back to the hive.

While workers have these distinct features, queens do not. The team confirmed this by isolating and silencing Ubx. This made the pollen baskets completely disappear, altered the growth of the pollen comb and reduced the size of the pollen press. Interestingly, Ubx is also expressed in the same region of the hind legs in bumble bees, which are in the same family as honey bees. This finding suggests that the evolution of the pollen-gathering apparatus in all corbiculate bees may have a shared origin and could be traced to the acquisition of novel functions by Ubx.

In another interesting finding, researchers identified that bees living in more complex social structures have an advantage over isolated populations in developing these important functions.

“The pollen baskets are much less elaborate or completely absent in bees that are less socially complex,” Huang said. “We conclude that the evolution of pollen baskets is a major innovation among social insects and is tied directly to more complex social behaviors.”

The value of agricultural crops dependent on honey bee pollination was estimated to be $14.6 billion per year in the U.S. in 2013.

“In Michigan alone, the fruit and vegetable industries produce over $2 billion per year, and nearly 50 percent of that value is due entirely to honey bee pollination,” said Huang. “This shows that bees are contributing significantly to the state and national economy.”This study, along with future research by Popadic and Huang, may provide an option for improving the shrinking population of bees’ pollen-collecting capacity, leading to increased pollination and hopeful increases in fruit and vegetable production.