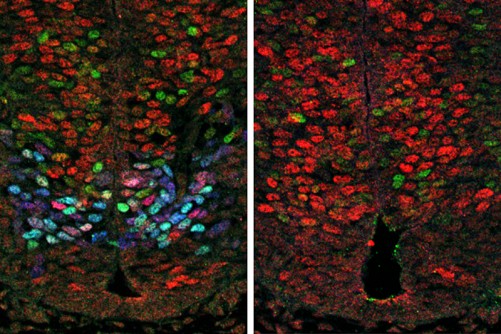 Newswise — UCLA researchers have discovered the inner workings of a gene network that regulates the development of spinal motor neurons in the growing chicken and mouse embryo. The research also answers a long-standing question about why motor neurons, the nerve cells of the spinal cord that control muscle movement, form much faster than other types of neurons.

The study was published in the journal PLOS Biology by co-senior author Bennett Novitch, member of the Eli and Edythe Broad Center of Regenerative Medicine and Stem Cell Research at UCLA and collaborators from the Francis Crick Institute in London, U.K. It has important implications for facilitating the production of motor neurons from stem cells in the lab. Stem cell-derived motor neurons could be used to repair the diseased or damaged spinal cord and to study neurodegenerative diseases such as amyotrophic lateral sclerosis (also known as Lou Gehrig’s disease) and spinal muscular atrophy.

"This study provides an unprecedented detailed view of how embryos produce the different cell types found in the mature spinal cord,” said Novitch, UCLA’s Ethel Scheibel Professor of Neurobiology. “The new experimental techniques we used, combined with collaborative efforts of biologists and computer scientists, are allowing us to gain new insight into the exquisite accuracy of embryonic development."

During embryonic development of the spinal cord, different types of nerve cells are formed from precursor cells, called neural progenitors. It has been known for a long time that different types of neurons form at differing speeds during development, with motor neurons forming faster than the other types of nerve cells that populate the spinal cord. However, researchers didn’t know why or how motor neurons develop this way.

The research team used the latest molecular techniques to assess how the activity of genes change as neurons form. This was achieved using an approach called single cell transcriptional profiling, which allows the activity of all genes in individual cells to be measured simultaneously. This gave the team snapshots of global gene activity in about 200 cells that were in the process of becoming motor neurons. To analyze these data, the team developed custom computer software to reconstruct how gene activity changes as motor neurons form.

“During embryonic development, the nervous system is constructed following a precise blueprint, with key parts forming at precise times and places, and appropriate numbers. Our research sheds light into how this process is orchestrated specifically for motor neuron development,” said Novitch.

The research was funded by the National Institute for Neurological Disease and Stroke, the March of Dimes Foundation, the Whitehall Foundation and the UCLA Broad Stem Cell Research Center.