Researcher Explains How Santa Delivers Presents in One Night 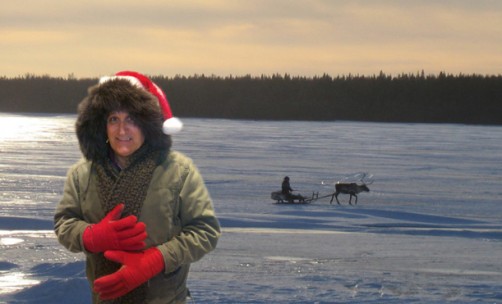 Silverberg, seen here during a visiting scholar stint at Santa's Workshop, explains exactly how the jolly elf does it.

Newswise — Don’t believe in Santa Claus? Magic, you say? In fact, science and technology explain how Santa is able to deliver toys to good girls and boys around the world in one night, according to a North Carolina State University researcher.

NC State’s Dr. Larry Silverberg, professor of mechanical and aerospace engineering, can explain the science and engineering principles that allow Santa, also known as Kris Kringle or Saint Nicholas, to pull off the magical feat year after year.

Silverberg was team leader on a first-of-its-kind visiting scholars program at Santa’s Workshop-North Pole Labs (NPL) last year. “Children shouldn’t put too much credence in the opinions of those who say it’s not possible to deliver presents all over the world in one night,” Silverberg says.

With his cherubic smile and twinkling eyes, Santa may appear to be merely a right jolly old elf, but he and his NPL staff have a lot going on under the funny-looking hats, Silverberg says. Their advanced knowledge of electromagnetic waves, the space/time continuum, nanotechnology, genetic engineering and computer science easily trumps the know-how of contemporary scientists.

Silverberg says that Santa has a personal pipeline to children’s thoughts – via a listening antenna that combines technologies currently used in cell phones and EKGs – which informs him that Mary in Miami hopes for a surfboard, while Michael from Minneapolis wants a snowboard. A sophisticated signal processing system filters the data, giving Santa clues on who wants what, where children live, and even who’s been bad or good. Later, all this information will be processed in an onboard sleigh guidance system, which will provide Santa with the most efficient delivery route.

However, Silverberg adds that letters to Santa via snail mail still get the job done. “While he takes advantage of emerging technologies,” Silverberg says, “Santa is, in many ways, a traditionalist.”

Silverberg is not so naïve as to think that Santa and his reindeer can travel approximately 200 million square miles – making stops in some 80 million homes – in one night. Instead, he posits that Santa uses his knowledge of the space/time continuum to form what Silverberg calls “relativity clouds.”

“Based on his advanced knowledge of the theory of relativity, Santa recognizes that time can be stretched like a rubber band, space can be squeezed like an orange and light can be bent,” Silverberg says. “Relativity clouds are controllable domains – rips in time – that allow him months to deliver presents while only a few minutes pass on Earth. The presents are truly delivered in a wink of an eye.”

With a detailed route prepared and his list checked twice through the onboard computer on the technologically advanced sleigh, Santa is ready to deliver presents. His reindeer – genetically bred to fly, balance on rooftops and see well in the dark – don’t actually pull a sleigh loaded down with toys. Instead, each house becomes Santa’s workshop as he utilizes his “magic bag of toys” – a nano-toymaker that is able to fabricate toys inside the children’s homes. The presents are grown on the spot, as the nano-toymaker creates – atom by atom – toys out of snow and soot, much like DNA can command the growth of organic material like tissues and body parts.

And there’s really no need for Santa to enter the house via chimney, although Silverberg says he enjoys doing that every so often. Rather, the same relativity cloud that allows Santa to deliver presents in what seems like a wink of an eye is also used to “morph” Santa into people’s homes.

Finally, many people wonder how Santa and the reindeer can eat all the food left out for them. Silverberg says they take just a nibble at each house. The remainder is either left in the house or placed in the sleigh’s built-in food dehydrator, where it is preserved for future consumption. It takes a long time to deliver all those presents, after all.

“This is merely an overview, based on what we learned at the NPL, of Santa’s delivery methods,” Silverberg says. “Without these tools, it would be impossible for him to accomplish his annual mission, given the human, physical and engineering constraints we face today.”