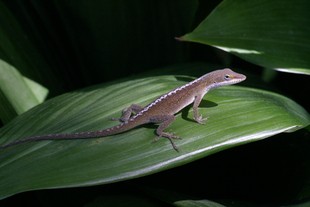 When the green anole drops its tail to escape a predator, it loses agility and mobillity.

Newswise — Among nature's more interesting wonders is the ability of many lizard species to escape their predators. When caught in a vulnerable position, they simply drop their tails, leaving the twitching body part to distract the predator as they scamper to safety. But, says Gary Gillis, a biology professor at Mount Holyoke College, the lizards lose significant mobility and agility in return for this life-saving natural escape mechanism.

Up to 50 percent of some lizard populations seem to have traded part of their tails in exchange for escape, according to Gillis. While the tails typically grow back in three to six months, Gillis wondered how the loss might impact a branch-hopping, tree-dwelling lizard's mobility and ability to survive in the interim. Teaming up with undergraduate student Lauren Bonvini, he began recording lizard leaps to observe how well the reptiles coped without their tails. The results are being published February 13 in The Journal of Experimental Biology (http://jeb.biologists.org/).

Constructing a jumping arena from boxes and fine sandpaper, Gillis and Bonvini gently encouraged arboreal Anolis carolinensis (anole) lizards to launch themselves from an 11-centimeter-high platform while filming the animals' jumps. The lizards performed well, launching themselves by pushing off with their back feet and landing gracefully, covering distances ranging from 14.9 to 29.9 centimeters.

But how well would the animals perform without their tails? After holding the lizards' tails to encourage them to drop them, just as they would with a predator, Bonvini then persuaded the tailless reptiles to jump while Gillis filmed them. As soon as the first animal took to the air, Gillis knew something was different.

"It looked weird," he said. "The animals became blurred as they jumped."

Replaying the animal's jump in slow motion, the team could see that it was tumbling backwards, out of control, as its tail stump flailed. Filming other tailless anoles, four backflipped out of control, although two others seemed to manage their trajectories better.

Teaming up with Duncan Irschick of the University of Massachusetts, Amherst, to analyze the reptiles' leaps, Gillis could see that everything about the tailless lizards' take-off was exactly the same as it had been before they lost the appendage " until they left the jump stage. The lizards then began flipping backwards by more than 30 degrees; some tumbled so far that they landed on their backs. The team also realized that when the lizards with whole tails took off, they raised the base of their tails as the rest of the appendage trailed along the ground, as if it was somehow stabilizing the take-off.

"If jumping and landing are important for lizards, they are clearly compromised after losing their tails. Coordinated landing on a branch is out of the question when spinning backwards," said Gillis. Escaping lizards pay a significant ecological cost for their life-saving quick-release system, he concluded.

So how do the lizards use their tails to ensure a safe touchdown? Gillis isn't sure whether they push down with their tails at take-off to prevent themselves from spinning, or whether the trailing tail passively stabilizes the animal's departure. He is continuing his research to determine how lizards adjust to life without their tails, with differential degrees of tail loss, and after the tails have grown back.

IF REPORTING ON THIS STORY, PLEASE MENTION THE JOURNAL OF EXPERIMENTAL BIOLOGY AS THE SOURCE AND, IF REPORTING ONLINE, PLEASE CARRY A LINK TO: http://jeb.biologists.org

Full text of the article is available ON REQUEST. To obtain a copy contact Kathryn Knight, The Journal Of Experimental Biology, Cambridge, UK. Tel: +44 (0)1223 425525, or email kathryn@biologists.com