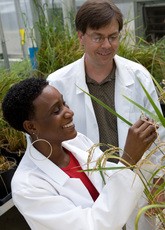 Graduate student Tameka Bailey examines rice in the University of Arkansas greenhouse with Ken Korth, professor of plant pathology. Bailey studies a family of proteins called kinases and has uncovered some of the mechanisms that could be used to help increase drought and salinity tolerance and disease resistance.

Newswise — A University of Arkansas graduate student is helping rice farmers grow better crops by studying the plant at its most fundamental molecular level.

Cell and molecular biology major Tameka Bailey's research focuses on a certain type of proteins and the molecular mechanisms that trigger rice's response to stressful conditions, such as drought, high salinity or a biological disease called rice blast. Understanding how plants respond to these stressors will help scientists and farmers develop better ways to grow rice in less than optimal conditions.

"The proteins have so much power in the cell, it's amazing," Bailey said. "They can change the whole fate of the plant."

Working with Yinong Yang, a former professor of plant pathology in the Dale Bumpers College of Agricultural, Food and Life Sciences who is now at Penn State University, Bailey uncovered the gene responsible for a molecular mechanism that helps regulate rice blast resistance through the production of ethylene, an organic gas found in nature. Bailey also studied proteins called mitogen-activated protein kinases. These proteins regulate the plants' response to external stimuli, such as drought or disease. The particular type of kinase Bailey studied is the last one in a cascade of kinases that convert signals from receptors into responses from the plant.

She found that these proteins regulate the plants' production of an acid called abscisic acid, which led to stress tolerance in drought and high salinity conditions, a trait that appears to be conserved in other types of plants. Bailey isolated and characterized these proteins, which are responsible for activating the plant's response to stress.

To give rice plants a boost in their ability to tolerate stressful conditions, Bailey used genetic engineering to create plants that would express a great deal of the protein. To do this, she inserted extra copies of the protein kinase DNA into the DNA of a rice plant. The transgenic rice plant then expressed an abundance of that particular protein. In contrast, Bailey produced transgenic plants where the protein kinase was suppressed to see how the plants responded to stress in the absence of the protein of interest. Her studies showed that the extra boost of protein kinases led to increased drought tolerance.

"Those traits are really important to rice farmers," Bailey said. "Making a direct contribution to this is really a plus to my work."

"Her study contributes to our understanding of plant stress signaling mechanism and may help improve crop disease resistance and stress tolerance in the near future," said Yang, who continues her own research at Penn State University.Bailey has co-authored a chapter on signal transduction of rice disease resistance. Because of her research, she also was awarded a study and travel grant from the Asian Rice Foundation.

Bailey, a native of Gould, Ark., is expected to graduate from the University of Arkansas this fall with a doctorate in cell and molecular biology.